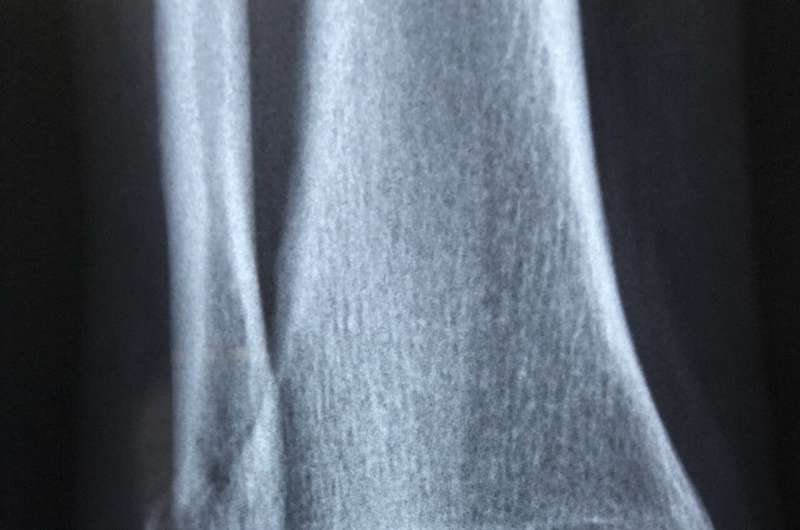 In a world where hip and knee replacements have become common, orthopedic surgeons remain surprisingly divided over ankle replacements.

An ankle joint can become arthritic after a traumatic injury if the joint cartilage breaks down. This cartilage is the only buffer between the bones, and its loss causes them to rub together painfully.

The standard treatment is to remove the remaining joint cartilage and insert screws between the bones so they grow together. This is called an ankle fusion.

“Fusions come with their own set of issues, including the potential for failure, and further arthritis from the increased wear and tear on the surrounding joints.”

One recent patient had a complication from a previous ankle replacement, resulting in the collapse of the joint with the talus—the large bone between the ankle joint and the heel bone.

“Traditionally when this happens, the only way to salvage it is to try to achieve a fusion—but both the failure rate and the patient dissatisfaction rate associated with this operation are high, and the results are often poor,” Dr. O’Carrigan says.

“In this case, we were able to replace the talus with a custom-designed, 3D-printed metal prosthesis that could articulate with the ankle replacement and fuse with the surrounding bone, thereby relieving pain and maintaining movement. It’s a much better long-term result.”

A second patient had lost her talus due an open fracture dislocation from a motorcycle accident, and had had it replaced by another surgeon with a smooth metal prosthesis that articulated with her cartilage, but the new metal “bone” was causing her significant pain because the cartilage had worn away.

In this case, Dr. O’Carrigan and Dr. Alttahir were able to convert the metal talus to an ankle replacement, using a custom 3D-printed joint.

“There are a few reports of similar ankle replacement procedures around the world, but the solution we’ve found is more sophisticated than any previously described techniques,” Dr. O’Carrigan says.

The advance is due to specialized computer aided design (CAD) software, allowing the team to provide a highly customized solution that is unique to each patient. Other procedures have not involved such refined design.

“Both patients were forced to seek further options because they were in pain, and conventional treatments were not going to provide a satisfactory outcome.

“Through joint replacement, the pain has not only resolved, but they have retained movement.”

After an ankle replacement, the patient spends just six weeks on crutches while the new joint attaches to the bone, followed by another six weeks in a boot. Full recovery takes about 12 months.

Patients are assessed on a case-by-case basis, as not every arthritic ankle is suitable for one of these pioneering joint replacements.

Fusion may still be the best option for someone who has already lost too much of the architecture of their ankle, has significant amounts of scar tissue from previous operations, or has muscular damage.

‘The only other option was fusion—or to lose my foot’

Mike Chadwick, 72, traveled from Hobart to consult Dr. O’Carrigan after he suffered complications from an ankle replacement.

“I had the subtalar joint fused at the same time as the ankle replacement, and following the complication, I was looking at a total ankle fusion, which would have left me with no movement in my foot at all—or the possibility of losing my foot altogether,” Mr Chadwick says.

“During an ankle replacement, quite a lot of bone has to be removed, and afterwards in my case, unfortunately the talus died and collapsed, meaning I couldn’t walk.

“I couldn’t find anyone in Hobart or Sydney who could give me another option than total fusion or amputation, and I wasn’t really excited about the idea of either.”

Over the course of two operations, Dr. O’Carrigan removed the collapsed bone, then replaced it with a metal 3D-printed talus to which the base of the original ankle replacement could be attached.

As an arthritis sufferer, Mr Chadwick is unfortunately no stranger to joint replacements: he had his first knee replacement at 61, followed by the other knee and a hip.

“I used to run a lot, and I played rugby when I was younger,” he says. “I was always very fit and active, so it’s a bit disappointing to have this problem now.”

“I’m still working on my rehabilitation, but now I walk a kilometer or two most days, and I can ride a bike again. I’ve learned that joint replacements continue to improve for a couple of years, so I’m expecting it to get even better as the muscles surrounding the ankle and in the leg continue to get stronger.

“I still have movement in the ankle joint, which is important because my big toe and a couple of the smaller toes in the same foot have also been fused due to arthritis.