If you played outside a lot growing up or are an avid hiker, you’ve probably heard time and time again that you should *always* do a tick check when you come inside. But given that ticks are teeny-tiny, you might not always catch one or even realize a tick bit you until it’s too late and symptoms start to hit you.

Nearly 50,000 tick-borne illnesses were reported in 2018 in the United States, according to the Centers for Disease Control and Prevention (CDC). Tick-borne illnesses—two of the best-known in humans are Lyme disease or Rocky Mountain Spotted Fever—isn’t something to take lightly, as these conditions can make you feel pretty sick. If left untreated, they can cause a host of serious, long-term symptoms, ranging from arthritis to cardiovascular and neurological problems.

Don’t worry: Finding a tick on your body after a weekend camping trip is not a guarantee that you’ll be plagued with illness, according to Walter Schrading, MD, director of the Office of Wilderness Medicine at the University of Alabama at Birmingham. “The tick bite itself is not dangerous and doesn’t cause any symptoms or rash unless it’s carrying one of the major diseases we worry about,” Dr. Schrading explains. “Otherwise, the tick can just be removed with tweezers, [with nothing but] local irritation around the bite.”

That said, if you’re worried that one of your more recent bites might be from a tick, don’t freak. Here are six photos to help you assess your situation, and figure out whether that bite could be from a tick, plus what to expect next if it is.

The tick bite itself will likely be so small and painless (just a little red dot, if anything) that you won’t actually notice it, says Qurat Mudassar, MD, an infectious disease specialist and primary care physician at Norwalk Hospital in Connecticut. You’ll likely only become aware that one of those little buggers has latched onto you if you actually find the tick attached to your skin, or if you develop one of the tell-tale rashes (or other symptoms) that signals you’ve been infected with a tick-borne illness.

The hallmark sign of Lyme infection is a rash that resembles a bullseye. “[With Lyme disease], the rash is a localized infection,” Dr. Mudassar says. “The center may be clear with a red, circular margin outside.” This rash may also become itchy or swollen for some people.

Here’s where it gets a little more complicated: Not everyone who develops Lyme disease gets a rash, and even the people that do often don’t notice it, Dr. Mudassar says. Plus, the rash can show up on other areas of the body away from the bite site, so it might not raise any red flags.

What if I don’t get a rash but still feel super sick?

Since you can’t always rely on a rash to clue you in, pay attention to other signs of illness you experience after possible exposure. Dr. Mudassar says that tick-borne illnesses can cause fever, fatigue, loss of appetite, headache, muscle pain, and regional lymph node swelling in the early stages of the disease.

Dr. Schrading adds that you might simply have nonspecific viral illness symptoms, like malaise and myalgia—so it helps to consider the time of year you’re feeling sick. “More people are outside and around ticks in the summer, which isn’t flu season,” he says. “So if you’re feeling like you have the flu in the middle of summer, think about whether you could have been exposed to a tick.” Noted.

What are the complications and risks of a tick bite?

Experiencing a life-threatening illness from a tick bite is pretty uncommon, but it doesn’t hurt to be informed on the possible complications and risks. As you know, certain species of ticks are capable of transmitting infections, the most troubling being tick-borne diseases, explains Keri Peterson, MD, an internal medicine physician based in New York City.”The risk of developing these infections depends on where you live, the type of tick, and how long the tick was attached to the skin,” Dr. Peterson says.

The flu-like symptoms (headaches, fever, pains) you might feel post-tick bite can mean a number of different things about your medical situation. “The timing of these symptoms vary depending on the type of tick and length of time it was attached to the skin,” says Gina Charles, MD, a family physician based in Pennsylvania. For this reason, no matter what kind of symptoms you’re feeling, the safest bet is always to visit your healthcare provider as soon as possible post-bite to determine if you’ve contracted any of the following.

Does it matter what kind of tick bit me?

There are many different species of ticks, but the detail that matters is whether you were bitten by a deer tick (a.k.a. a black-legged tick) or dog tick, which are known to transmit these two major diseases to humans.

“The only two major diseases we see reside in deer and dog ticks—if you’re bitten by a random tick that doesn’t transmit disease, you’ll be fine,” says Dr. Schrading, who clarifies that deer ticks transmit Lyme disease and dog ticks transmit Rocky Mountain Spotted Fever. Other ticks, like the Lone Star tick, for example, also transmit diseases. But infections from Lone Star ticks make up a small percentage of all tick-borne illnesses, per the CDC.

The tricky thing is that there’s no way to tell from the actual bite itself which tick nabbed you. That said, if you develop the classic bullseye rash or a spotted rash spreading across your body, it’s pretty clear which tick was the culprit. At that point, you should definitely hightail it to your doctor’s office for evaluation, which Dr. Mudassar says is worth doing for *any* tick bite, even one that isn’t causing symptoms yet. 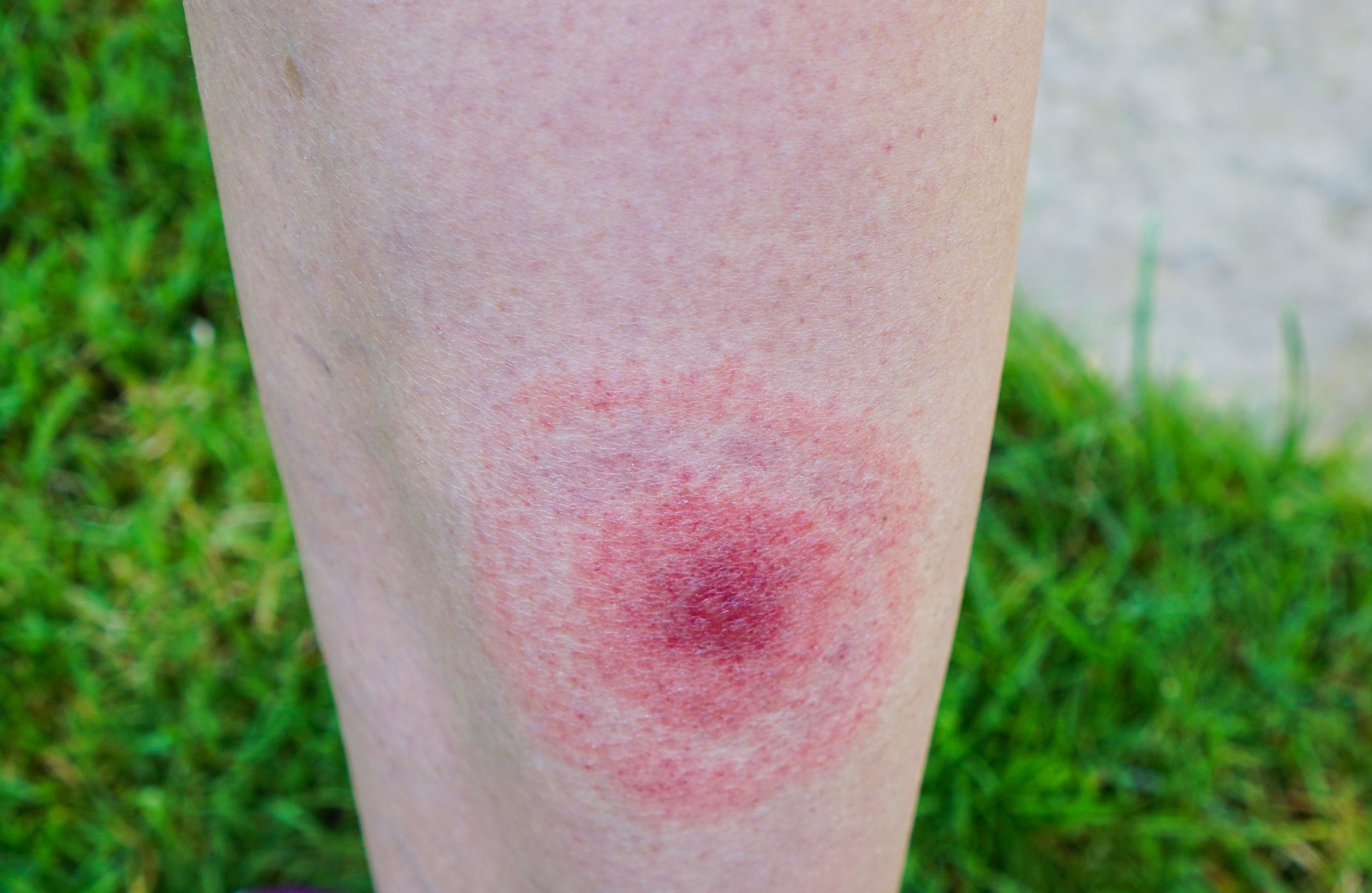 “It’s better if you go to the doctor right away when you know you’ve had a tick bite,” says Dr. Mudassar. “If you go within 36 hours of the bite, you can be treated with a lesser dose of antibiotics [if your doctor determines that’s necessary].”

Your doctor may be able to test you for illness with blood work to identify the pathogen. But Dr. Schrading warns it can take a while for results to come back, and false negatives can occur.

If I did get a tick-borne illness, how long does it take for symptoms to appear?

A tick will spend the first 12 to 24 hours on your body looking for a place to settle in, Dr. Mudassar says. Once it finds a desirable spot—like your armpit, groin, or the back of your neck—it will latch on.

From there, it takes a few days for the tick to actually transmit any illness it might be carrying; Dr. Schrading notes that it could be about four to seven days before a rash or symptoms appear.

A post shared by Where’s Your Will To Be Weird? (@krileyzin)

What if the tick that bit me didn’t transmit an infection?

If you know for sure a tick bit you because you found it attached to your skin, it’s still totally possible you won’t contract an illness. Why? Well, not all ticks carry diseases, for starters. As mentioned, there’s also a correlation between the length of time the tick was attached to you and how likely you are to get sick.

“Removing the tick as soon as possible reduces risk of infection if it’s carrying a disease,” says Dr. Schrading. “The less time it’s attached to you, the less likely it is to infect you, especially if it’s been less than 12 hours.”

How can I prevent tick bites altogether?

If your yard is on the wild side or you’ve got plans to go hiking, camping, or walking through the forest or mountains, you’re in prime tick territory, per the CDC, and you’ll find ticks in highly wooded, humid areas like forests and trails. Headed somewhere you know might be tick-heavy? Spray your clothing, shoes, and camping gear with insecticides that contain 0.5 percent permethrin, Thomas Mather, PhD, director of the Center for Vector-Borne Disease at the University of Rhode Island in Kingston, tells Women’s Health.

You should also try wearing colorful clothing (it’s easier to see ticks), long-sleeves, and full-length pants, being sure to tuck your hanging sleeves into your gloves and shoes. Reapply your tick repellent throughout your day, and do careful tick checks after you’ve been outside for a significant amount of time. You can also keep tabs on local tick activity in your area by contacting your state’s health department (or visiting their web site).