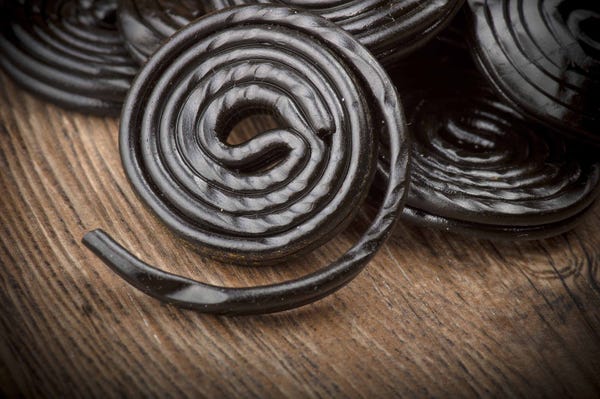 A Boston-area construction worker died last year after eating a bag and a half of black licorice every day for two weeks, according to a case report published today in the New England Journal of Medicine.

The candy, as well as many others, contains glycyrrhizic acid, which can interfere with the body's nutrient balance and lead to to heart-rhythm problems.

While there are reports of other complications from excess licorice consumption, including hypertension and muscle weakness, death by excess black licorice is extremely rare.

The man was in a fast-food restaurant when he collapsed

The 54-year-old was at a fast-food restaurant when he suddenly gasped, began experiencing full-body shakes, and lost consciousness, according to the case report.

An emergency crew kept him alive by performing CPR and delivering shocks to his heart, which had an irregular beat, and took him to Massachusetts General Hospital, where he arrived unresponsive.

Doctors administered a variety of treatments, including emergency ventilation through his trachea, and admitted him to the cardiac intensive care unit. 32 hours after his arrival at the hospital, the man died with his family by his side.

While the man had other current and past health issues, including an untreated hepatitis C virus infection and a decades-long pack-a-day smoking habit, the clinicians said "excessive licorice consumption" likely led to the heart and nutrient imbalance issues that caused his death.

He had switched from red to black licorice a few weeks prior.

According to the U.S. Food and Drug Administration, 2 ounces of black licorice a day for a few weeks can cause heart rhythm problems, especially if you're over 40 years old.

"Even a small amount of licorice you eat can increase your blood pressure a little bit," said Dr. Neel Butala, a cardiologist at Massachusetts General Hospital who described the case in the New England Journal of Medicine.

Black licorice isn't the only culprit, though. Jelly beans, licorice teas, some Belgian beers, and some chewing tobaccos have glycyrrhizic acid in it, Dr. Robert Eckel, a University of Colorado cardiologist and former American Heart Association president who was not involved in the case, told the AP.

One 49-year-old woman who drank six licorice tea infusions a day experienced three weeks of headaches, nausea, tingling of the hands before going to the hospital, where she was treated with IVs of pottassium and other nutrients, according to a 2018 case report.

Another man who ate a pound of black-licorice-flavored Twizzlers a week reportedly sued the Hershey Company for failing to adequately warn consumers about glycyrrhizin's health risks. He had been diagnosed with atrial fibrillation and prescribed medication, but wasn't cured.

In response to the latest case study, Jeff Beckman, a spokesman for the Hershey Company, said in an email to AP that "all of our products are safe to eat and formulated in full compliance with FDA regulations," and that all foods, including candy, "should be enjoyed in moderation."

The FDA recommends not eating large amounts of black licorice at once, stopping consumption immediately if you have an irregular heart rhythm or muscle weakness, and talking to a health professional if you're taking drugs or supplements it may interact with.