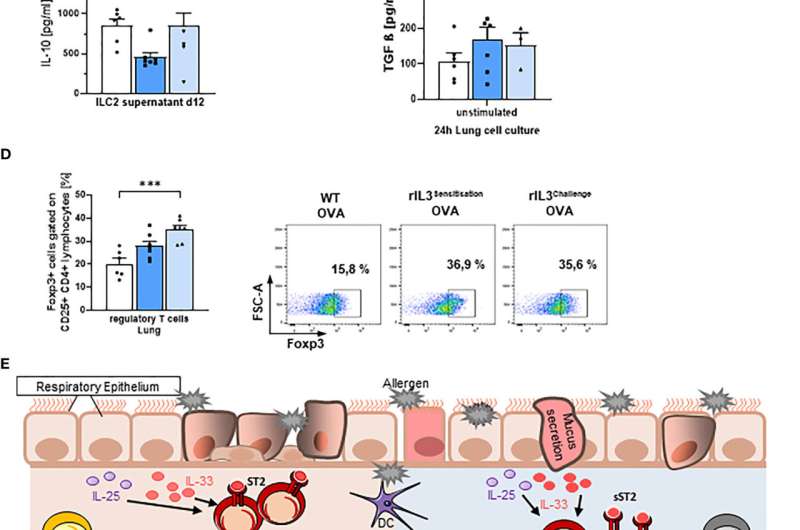 The messenger substance interleukin-3 produced by the body was previously considered to be pro-inflammatory in bronchial asthma. A research team from Universitätsklinikum Erlangen has now shown for the first time that the administration of interleukin-3, or IL-3 for short, can have a positive effect on chronic inflammatory respiratory disease.

Members of the research group led by Prof. Susetta Finotto, MD, and doctoral candidate and pharmacist Susanne Krammer from the Department of Molecular Pneumology investigated the production of the messenger substance in healthy preschool children and those affected by asthma who had participated in the European PreDicta pediatric asthma study. They found that children whose asthma was considered controlled by inhaled corticosteroid therapy had higher IL-3 production caused by blood cells known as activated peripheral blood lymphocytes. There was also a positive correlation between IL-3 in nasal fluid and the anti-inflammatory soluble form of the ST2 receptor. This suggests that IL-3 may contribute to alleviating asthma.

Using mice models induced with asthma, the researchers also investigated whether intranasal administration of IL-3 during asthma provocation could actually improve asthma symptoms. They discovered that IL-3 has a regulatory effect on the immune system and induces certain immune cells called regulatory T cells, which are believed to play a role in relieving bronchial asthma. Administration of IL-3 also decreased the number of pro-inflammatory eosinophil cells and reduced mucus production in the lungs of asthmatic mice.