Ms Camplin, who had a newborn at the time, had come to Mr Fink’s house because his wife Lauren, a physiotherapist, ran a baby massage business. 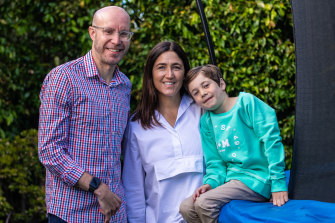 Paul Fink with his wife Lauren and son Oscar.Credit:Scott McNaughton

Nine months earlier Mr Fink had a massive brain haemorrhage at the age of 34 that paralysed the right side of his body and left him unable to swallow or speak.

Despite Mr Fink’s limited speech, he and Ms Camplin had a long talk. The aerial skier’s own life had been shadowed by tragedy when her first child, Finnan, died from congenital heart disease when he was just 10 days old.

She had also faced extraordinary challenges in her sporting career including multiple concussions and breaking both ankles six weeks before the 2002 Winter Olympics in Salt Lake City, which left her vomiting in pain at the bottom of the jump.

Seven years after they first met Ms Camplin is a guest on Stroke of Luck, the podcast Mr Fink hosts about overcoming adversity and how people cope with the challenges life throws at them. 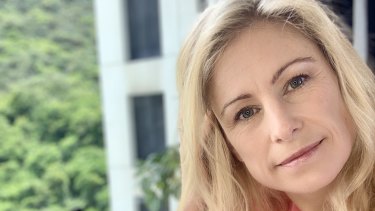 Mr Fink is no stranger to adversity. In 2014 he and Ms Fink had a six-month-old baby, Oscar, and he had just started his dream job at as an IT project manager with the AFL.

One morning in January he complained of a severe headache and Ms Fink found him writhing in agony on the bed.

Later they would learn he had an aneurysm due to an undetected congenital malformation of blood vessels in his brain. “The doctor said it was a – what’s it called? – ticking time bomb. I was lucky I was at home with Lauren.”

After two weeks in a coma and four brain surgeries, Mr Fink woke up to a new reality. “My thought process was still going on,” Mr Fink says. “I thought I was talking, but my speech was zero.” 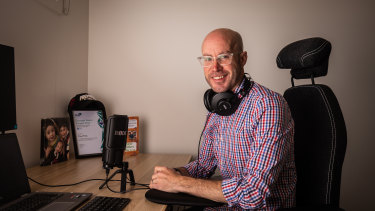 Ms Fink says her husband couldn’t even give a thumbs up or down. They tried showing pictures so he could point to the answer he wanted. Nothing. “He couldn’t make a sound let alone actually say a word.”

Mr Fink says his motivation to get better was to be a good, hands-on father. (The couple now have three children.) “I have always been very positive in my life and continued this attitude after the stroke also. I am very fortunate my personality is not changing.”

Ms Fink knew he was determined, but she is also a physiotherapist and a realist. “I said to the doctors, ‘If there’s a life to live I know he’ll live it, but you’ve shown me these MRI scans. There’s only so much the brain can mould and improve and progress if there’s not much brain matter there’. No one would have expected him to get to where he is today.”

These days he can not only walk, he is learning to run. His right arm is still paralysed, but he has learnt to do everything from drive, to put in contact lenses and tie his shoelaces with his non-dominant hand (he’s made a how-to YouTube video to teach others).

Mr Fink’s rehab occupational therapist told him he was her first patient to insist on learning to tie his shoelaces rather than wear velcro shoes. “I was pretty stubborn,” he says.

His speech can be slow and halting but is now easy to understand. However, ongoing aphasia, (speech and word recognition problems as a result of the damage to the part of the brain responsible for language), means he can sometimes forget things or skip words.

It was Mr Fink’s speech therapist who initially suggested he make a podcast about his recovery, both to improve his verbal skills and memory and to share his story. Mr Fink was initially reluctant because he didn’t want to be the centre of attention.

“I thought about it and the compromise was that I would be the host interviewing other people.”

Mr Fink says passion, a powerful mindset and positive attitude were common themes throughout the interviews. “I think I was more motivated after speaking to Graeme, to look for a job,” he says. “Graeme’s aim, being a lawyer, is trying to improve society. I know I am capable of work, maybe IT or something else and I am excited about my future."

The title of the podcast Stroke of Luck could be ironic, but it’s not. “Other stroke survivors have no speech at all,” Mr Fink says. “I am very fortunate that I have a voice.”

Fascinating answers to perplexing questions delivered to your inbox every week. Sign up to get our new Explainer newsletter here.