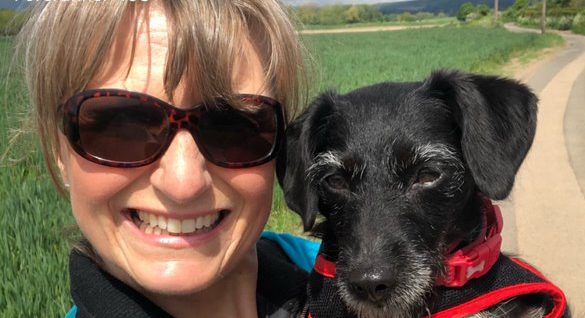 She was only a few minutes old, but I named her Samantha.

I can still remember the sound of her trying to breathe before I held her in my arms and doctors took a Polaroid for me to remmber her by.

Then, alone, I was sent to postnatal care with no baby and milk filling up my breasts. Samantha was born at 27 weeks and six days; she wasn’t classed as ‘viable’.

She was my first child, so when I felt an ache in my tummy and back a few days earlier, I didn’t know what to do. I ignored it, even slept on it, but on the second day of excruciating pain, I went to my GP who told me I was in labour.

I was blue-lighted to the hospital and told that my baby had a 50/50 chance of survival. She was too small, and breech, too.

I can remember the doctor and midwife’s face as they tried to work on her and after she stopped breathing. It told me all I needed to know.

Though there was nothing I could’ve done to save her, I blamed myself.

Truthfully, a few weeks later, I began to have a breakdown.

Back then, there wasn’t the same understanding about mental health as there is now. I felt so low and didn’t know what was happening to me, or what was wrong.

I couldn’t even put my washing out on the line for the fear of having a heart attack and dying. I was a shadow of my former sociable, bubbly and outgoing self

Over time, I started to feel all of these different emotions, which I now know as anxiety and panic symptoms. I kept seeing babies everywhere, and plenty of my friends were having them, too.

Soon, I had my first panic attack and called an ambulance as I thought I was dying. I started getting them frequently, and they just got worse.

It got to the point where I was too scared to go outside. Too scared of having a panic attack.

I couldn’t even put my washing out on the line for the fear of having a heart attack and dying. I was a shadow of my former sociable, bubbly and outgoing self.

I didn’t know how to speak to people, how to relate or socialise – and I dreaded seeing any mothers with their bouncing babies who started avoiding me as they didn’t know what to say.

I saw my home as a beacon of safety, and I ended up with acute agoraphobia. It’s when you get to the point where your anxiety and panic is so bad, that you are gripped by fear every time you try to go out, so you end up staying inside.

It was like I was a prisoner in my own home. Admittedly, I thought about ending my life as I couldn’t see a way out – but it was in my darkest times that I found faith. Looking back, I truly believe it was God who saved me.

I found the strength to seek professional help, then started to do exposure therapy. This included tasks that were set by my psychiatrist, such as walking down my street for a couple of minutes.

I’d wait for the anxiety to reach its peak, then once it started to subside I could return home, scoring the intensity of fear on a scale of 1-10. These tasks had to be done every day, and I prayed every step of the way.

My relationship with Samantha’s father ended not long after we lost her, and I got together with my now-husband Mark at the end of 1987. I’d known Mark for a couple of years before I was ill – I used to play darts in a group at a local pub, Mark was in the group.

Soon, life was good, and I’d thought I’d recovered from the worst.

But in 1996, when I was 33 weeks pregnant with my third child after Samantha, my dad sadly passed away unexpectedly, which was a total shock. I had another breakdown, worried that history would repeat itself and that I would lose my third baby the way I did Samantha.

Miraculously, John was born safely at 38 weeks – which I saw as an answer to my prayers.

It was a horrendous time, but I clung on to life and to my faith. When anxiety and agoraphobia kicked in once again, I sought help from a psychotherapist to begin taking short walks to the end of my street – sometimes I’d panic and turn back. But I pushed myself each time to do one minute more. Get to this lamp-post, that car, this cornershop.

I remember my therapist once telling me to spend five minutes looking at make-up in Boots. It sounds so silly now but back then, it felt like a lifetime. I nearly gave up, multiple times, but I did it. With the help of God, through prayer and faith, I beat my fears.

I started thinking to myself: ‘I’m a strong person, I can get through this’. I didn’t want my children to be afraid of what I was, and wanted to inspire them with bravery and courage. Gradually I built my walks up to one mile, then two, three…

Now, I’m a mother-of-three and have been a qualified walking leader for over 10 years. I can often take groups of up to 20 people out for long-distance treks across stunning hills, and beautiful natural landscapes around Kent where I live.

If you’d told me 20 years ago that I’d be leading treks across the countryside, I’d be laughing at you from the comfort of my home.

Walking is my medicine. It helps me feel grounded, alive and it is therapeutic. It’s like I can breathe again. It gives me time to think, and clear my head.

This year, Samantha would have been 35. I decided to walk 350 miles across the Kent Downs in an effort to raise money for the charitable organisation, Mission Aviation Fellowship (MAF) as part of its ‘Time In Their Shoes’ campaign.

MAF delivers critical support and care to those who need it, often in the most remote, secluded parts of the world. It is a really inspiring organisation.

They deliver an aircraft to take expectant mothers, or those in a crisis, to hospitals that can often be a week’s walk away.

I first heard of MAF in 2017 when my son Marc started to work for them.

I discovered that a mother from Papua New Guinea was in labour for four days with her second child – she was having strong contractions, and was totally exhausted but the clinic couldn’t help deliver her baby. The nearest hospital was a seven-day trek away, but MAF were able to help transport her on a 35-minute flight instead.

Thankfully, her and her baby are alive and well – but not all women are afforded the same fate.

I was blue-lighted to the hospital by the NHS when I lost Samantha – I couldn’t imagine the trauma of having to walk hundreds of miles, with the life of my baby hanging by a thread.

In the end, my friend Theresa and I walked 455 miles for MAF, finishing in Mental Health Week, and raising over £1,000.

I’m proof that you should never be ashamed to ask for help and that there’s always light at the end of the tunnel.

The best way to recovery is to face it head on and walk through the darkness to get to the other side.

You can donate to Sally’s fundraiser here, or find out more information about MAF here.

* As told to Emmie Harrison-West