The evidence-based statements, published in Gastroenterology, call for a national approach to CRC screening, outline the elements of a high-quality screening program, and make clear that payers should cover all costs, from bowel prep through pathology, plus follow-up for high-risk patients.

“There is strong evidence that CRC screening is effective [at reducing CRC incidence and mortality] … but less than 70% of eligible individuals have been screened,” wrote authors led by David Lieberman, MD, who is on the AGA Executive Committee on the Screening Continuum and affiliated with Oregon Health and Science University, Portland, noting the recent expansion of eligibility to include individuals in the 45- to 49-year age group.

“CRC screening saves lives, but only if people get screened,” Lieberman said in a press release from the AGA. “Cost sharing is an important barrier to screening, which contributes to racial, ethnic and socioeconomic inequities in colorectal cancer outcomes. The full cost of screening – including noninvasive tests and follow-up colonoscopies – should be covered without cost to patients.” 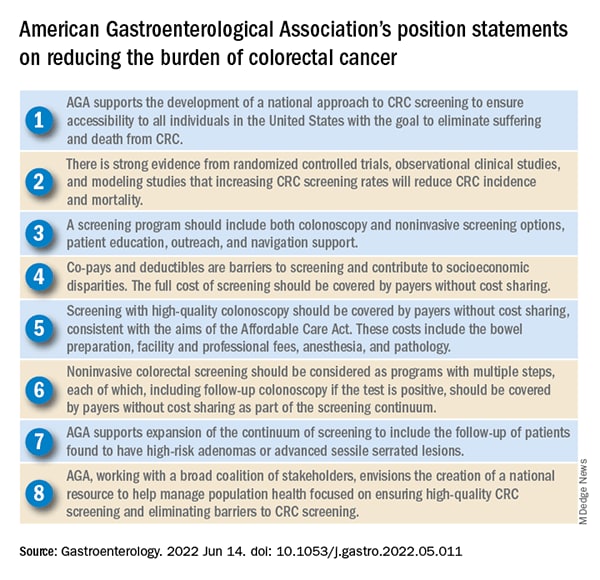 He added: “AGA wishes to collaborate with stakeholders to eliminate obstacles to screening, which disproportionately impact those with low income and lack of insurance.”

Among the position statements, Lieberman and colleagues first called for “development of a national approach to CRC screening” to patch gaps in access across the United States.

“Systematic outreach occurs infrequently,” they noted. “CRC screening prevalence is much lower among individuals who do not have access to health care due to lack of insurance, do not have a primary care provider, or are part of a medically underserved community.”

According to Lieberman and colleagues, the AGA is also “working with a broad coalition of stakeholders,” such as the American Cancer Society, payers, patient advocacy groups, and others, to create a “national resource … focused on ensuring high-quality CRC screening and eliminating barriers to CRC screening.”

Specifically, the coalition will work to collectively tackle “disparities created by social determinants of health, which includes lack of access to screening, transportation, and even work hours and child care.

“The AGA recognizes that moving the needle to achieve a CRC screening participation goal of 80% will take a village,” they wrote.

The investigators went on to describe the key features of a high-quality CRC screening program, including “colonoscopy and noninvasive screening options, patient education, outreach, and navigation support.”

Lieberman and colleagues pointed out that offering more than one type of screening test “acknowledges patient preferences and improves participation.”

Certain noninvasive methods, such as fecal immunochemical testing (FIT), eliminate “important barriers” to screening, they noted, such as the need for special preparation, time off work, and transportation to a medical facility.

For individuals who have high-risk adenomas (HRAs) or advanced sessile serrated lesions (SSLs), screening should be expanded to include follow-up, the investigators added.

To further improve access to care, payers should cover the full costs of CRC screening because “copays and deductibles are barriers to screening and contribute to socioeconomic disparities,” that “disproportionately impact those with low income and lack of insurance,” according to Lieberman and colleagues.

They noted that the Affordable Care Act “eliminated copayments for preventive services,” yet a recent study showed that almost half of patients with commercial insurance and more than three-quarters of patients with Medicare still share some cost of CRC screening.

The investigators made clear that payers need to cover costs from start to finish, including “bowel preparation, facility and professional fees, anesthesia, and pathology,” as well as follow-up screening for high-risk patients identified by noninvasive methods.

“Noninvasive colorectal screening should be considered as programs with multiple steps, each of which, including follow-up colonoscopy if the test is positive, should be covered by payers without cost sharing as part of the screening continuum,” Lieberman and colleagues wrote.

According to Steven Itzkowitz, MD, professor of medicine and oncological sciences and director of the gastroenterology fellowship training program at the Icahn School of Medicine at Mount Sinai, New York, the AGA publication is important because it “consolidates many of the critical issues related to decreasing the burden of colorectal cancer in the United States.”

Itzkowitz noted that changes are already underway to eliminate cost as a barrier to screening.

“The good news is that, in the past year, the Departments of Health & Human Services, Labor, and Treasury declared that cost sharing should not be imposed, and plans are required to cover screening colonoscopy with polyp removal and colonoscopy that is performed to follow-up after an abnormal noninvasive CRC screening test,” Itzkowitz said in an interview. “Many plans are following suit, but it will take time for this coverage to take effect across all plans.”

For individual gastroenterologists who would like to do their part in reducing screening inequity, Itzkowitz suggested leveraging noninvasive testing, as the AGA recommends.

“This publication is the latest to call for using noninvasive, stool-based testing in addition to colonoscopy,” Itzkowitz said. “FIT and multitarget stool DNA tests all have proven efficacy in this regard, so gastroenterologists should have those conversations with their patients. GIs can also make it easier for patients to complete colonoscopy by developing patient navigation programs, direct access referrals, and systems for communicating with primary care providers for easier referrals and communicating colonoscopy results.”

Many practices are already instituting such improvements in response to the restrictions imposed by the COVID-19 pandemic, according to Itzkowitz.”These changes, plus better coverage by payers, will make a huge impact on health equity when it comes to colorectal cancer screening.”

The publication was supported by the AGA. The investigators disclosed relationships with Geneoscopy, ColoWrap, UniversalDx, and others. Itzkowitz disclosed no relevant conflicts of interest.

This article originally appeared on MDedge.com, part of the Medscape Professional Network.