Having your appendix removed could become a thing of the past because 70% of patients given antibiotics don’t need the operation, major study finds

Having an operation to remove your appendix may become a thing of the past after a study found antibiotics are just as effective as the surgery.

Doctors split 1,500 patients who suddenly fell ill with appendicitis, which makes the organ swollen and painful, into two groups.

Half of the volunteers received a course of antibiotics, while all the others had their organ removed as part of the routine surgery.

More than 70 per cent of patients given antibiotics dodged surgery in the following three months, according to results of the University of Washington research.

They endured fewer sick days off of work or school, compared to participants who underwent surgery. And patients in both groups reported similar rates of recovery a month after treatment.

The findings suggest thousands of the operations could be avoided if doctors relied on antibiotics in the first instance.

And the scientists noted in their paper that antibiotics may become more standard as a treatment for appendicitis now that hospitals are stretched to deal with Covid-19 patients and a backlog of routine operations. 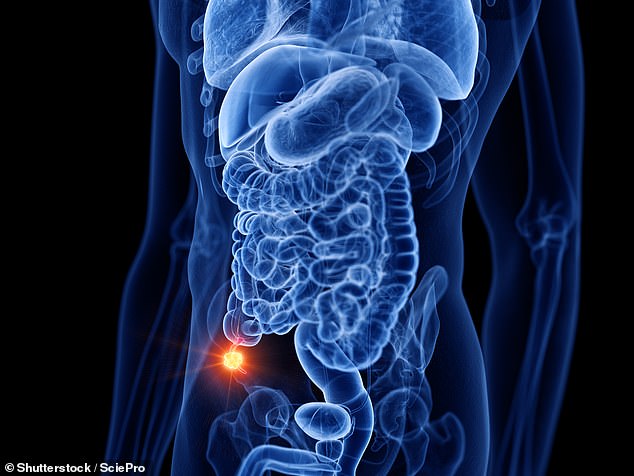 Appendix removal could become a thing of the past because antibiotics are just as effective as having surgery, a study has found. Pictured: Where the appendix is located

The NHS says around 50,000 people in England are admitted to hospital each year with appendicitis.

And in the US, about 11.6million cases of appendicitis occurred in 2015, according to the Global Burden of Disease Study 2016.

Inflammation of the appendix, a thin finger-like tube at the top of the colon, causes an intense pain in the lower right side of the body and sometimes constipation or diarrhoea.

The most common form of treatment is surgery, called an appendectomy, to take out the appendix straight away.

The NHS says: ‘If you have appendicitis, it’s likely your appendix will need to be removed as soon as possible.’ This is because the appendix can burst as early as 48 to 72 hours after symptoms start.

Appendicitis is a swelling of the appendix, a two to four-inch-long organ connected to the large intestine.

Appendicitis can cause severe pain and it’s important for it to be treated swiftly in case the appendix bursts, which can cause life-threatening illness.

In most cases surgeons will remove the appendix in an appendectomy – scientists aren’t sure why people need an appendix but removing it does not harm people.

The causes of appendicitis aren’t clear but it is thought to be caused by something blocking the entrance to the organ.

Symptoms include pain in the stomach which later travels to your lower right-hand-side and becomes severe.

Pressing on this area, coughing, or walking can all make the pain worse, and other symptoms can be nausea, vomiting, loss of appetite, diarrhoea and a fever.

During surgery, the appendix is removed from the body after doctors make three or four tiny incisions in the abdomen. The cuts are closed with staples or stitches.

After the routine surgery, most patients are able to go home the next day and return to normal activities after about one week.

But as with any surgery, there are risks. Around one in ten patients suffer side effects from the operation itself, such as catching a skin infection.

Several European studies have shown that most people with appendicitis can be treated successfully with antibiotics instead of having surgery.

The new trial, involving 1,552 appendicitis patients across 14 states, was set up to confirm such findings on a larger group of participants.

Patients were randomly selected to either undergo an appendectomy or receive antibiotics, which were at first given through an IV drip.

Once the patient went home, they kept taking antibiotic pills for a total of 10 days. The researchers did not name the antibiotics given.

The findings, published in the New England Journal of Medicine, show benefits and drawbacks for both treatment types.

But the findings suggested antibiotics could help patients avoid surgery all together.

Only three in ten patients had to return for surgery to remove the organ in the following three months, meaning seven in ten dodged the operation.

Of those who did end up having to have the surgery, 11 per cent had it within just 48 hours.

The paper acknowledged that a limitation of the research is that it only followed patients for three months.

For example, some may have needed surgery — or suffered other complications — after the trial finished.

The researchers said the Covid-19 pandemic limited their ability to follow patients for a year, as originally planned.

Because the antibiotics did not work to keep the infection at bay for those 30 per cent of people, the risk of recurrence of illness is much higher in the antibiotic group compared with the surgery group.

With the one-time treatment of appendix removal, patients rarely had to return to hospital – only four per cent needed to in the three months following.

The findings show nearly half (47 per cent) of the antibiotics group avoided hospitalisation for their initial treatment compared with 95 per cent in the surgery group who needed to be admitted following their operation.

But the overall time spent in the hospital was similar between both groups.

Participants in the antibiotic group missed an average of 5.3 days from work or school compared with 8.7 days in the appendectomy group due to differences in recovery.

Bonnie Bizzell, chair of the CODA patient advisory board, said: ‘People treated with antibiotics more often returned to the emergency department, but missed less time from work and school.

‘Information like this can be important for individuals as they consider the best treatment option for their unique circumstance. The CODA trial is really the first of its kind to capture these measures for shared decision-making about appendicitis.’

‘When we compared the outcomes of people treated with antibiotics alone or surgery to remove the appendix, we found that people receiving either treatment felt well at 30 days,’ said Dr David Talan, co-principal investigator and professor of emergency medicine and medicine/infectious diseases at the David Geffen School of Medicine at UCLA.

‘In terms of overall health status, antibiotics were no worse than surgery and allowed most people to avoid an operation in the short term,’ he said.

Scientists conducting the trial were most interested in the patients’ health 30 days after their treatment, finding similar levels of rated symptoms in the two groups.

Dr David Flum, co-principal investigator and professor and associate chair of surgery at the University of Washington School of Medicine, said: ‘There were advantages and disadvantages to each treatment, and patients will value these differently based on their unique characteristics, concerns, and perspectives.’

The researchers wrote in their paper: ‘With the pandemic of coronavirus disease 2019 (Covid-19), health systems and professional societies such as the American College of Surgeons have suggested reconsideration of many aspects of care delivery, including the role of antibiotics in the treatment of appendicitis.’