SCOTTSDALE, Ariz. (AP) — It was about two weeks ago when intensive care nurse Caroline Maloney stopped in her tracks as she walked toward the unit where she has spent the past year and a half caring for COVID-19 patients.

For months, her hospital’s six ICU units had been nearly back to normal, not sealed off because the beds were filled with patients battling the insidious infection that had claimed many of her patients — so many that she long ago lost count.

But on this day, the doors were closed. And she knew what it meant.

“I couldn’t believe we’re doing this again,” said Maloney, a 55-year-old nurse with nearly 30 years’ experience. “We’ve closed the unit again, and here we are again.”

A full 18 months into Arizona’s fight against the coronavirus, 1 million confirmed virus cases and more than 18,000 deaths later, Maloney is at times upbeat, at times dejected. The see-saw of Arizona’s fight against COVID-19 has been ever-present in her life. The state become a national hot spot in July 2020 and saw a fall lull before a winter surge that at times killed hundreds a day. 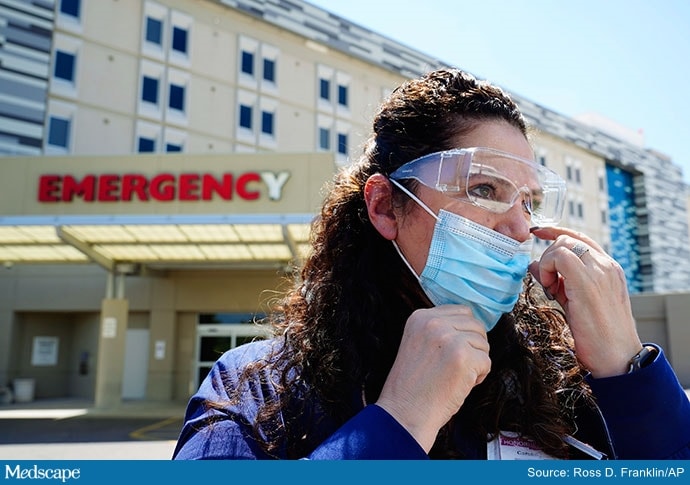 Caroline Maloney, 55, an ICU nurse at Scottsdale Osborne Medical Center, has been treating COVID-19 patients throughout the entire pandemic. During these 18 months, she has been at times upbeat and at times dejected.

Maloney, a nurse for a dozen years at HonorHealth’s Scottsdale Osborn Medical Center whose accent reveals she hails from South Boston, first spoke with The Associated Press about her experience treating virus patients in June 2020.

At the time, she was upbeat, pleased that a good number of the really sick patients who needed ventilators in her ICU were recovering.

“I really feel here at Osborn that we’ve had amazing outcomes,” she said at the time. “We have done exceptionally well. We have seen most of our patients leave the ICU — I don’t have the exact numbers — but our numbers are low as far as mortality.”

By January 2021, that had changed. The patients were sicker, death rates had skyrocketed, and she was more dejected. Arizona’s hospitals were inundated with virus patients. On Jan. 11, the state  Health Services Department reported that nearly 1,200 of the state’s approximately 1,800 intensive care beds were filled with COVID-19 patients.

When she spoke with the AP on Jan. 12, the state had tallied more than 636,000 COVID-19 cases and counted 10,855 deaths from COVID-19. And she was seeing well over half her patients die, often after weeks fighting for their lives in her unit.

Her hospital had converted five of its six ICU units into closed COVID-19 wards. Equipment sat outside closed patient rooms so nurses could maintain ventilators and IV pumps without having to get fully dressed in protective gear. Those who went into rooms for patient care donned full masks and gowns and looked otherworldly.

“We looked like we were going to war — and I think that we were,” she said. “We were raging against an unknown entity that we had no answer to.”

COVID-19 patients struck by the virus die a horrible death, their lungs ravaged by the disease and unable to absorb enough oxygen to support life.

“We’re hoping for that miracle, but you see the writing on the wall,” she said. “Their lungs are like steel gates, you can’t expand the oxygen in their lungs.”

Making it worse, their families are not allowed to be there to hold their hands. Nurses at hospitals across the nation have become the link between ill patients and their families, holding phones and tablets so patients can hear loved-ones’ voices, reporting on their progress or decline.

By January, mask mandates had split the state and the country, but the COVID-19 vaccine brought a bright glimmer of hope for a way out of the pandemic.

When Arizona’s winter surge had tapered off by March 5 and vaccinations seemed to be pushing new infection rates down, Maloney felt better. Her hospital, which at one point in the winter surge had filled 50 of its 60 ICU beds with virus patients, was down to just one 10-bed unit set aside for COVID-19.

“We feel like we can breathe, that there is a momentary lapse right now,” she said then.

And a week later, she texted with an update: “Zero! Zero Covid pts in the ICU!”

It was almost exactly a year since Arizona’s first reported COVID-19 death.

“Irony, a paradox of a year, or coincidence?” Maloney texted. “I’ll continue to hold my cautionary breath.”

Maloney, who has sung the praises of her co-workers and the support they give each other, has lived a closed life for the past 18 months. She’s skipped family birthdays, canceled Christmas and largely avoided going out with friends other than a close group of co-workers. She works 12-hour shifts for days in a row, then goes home. She hasn’t taken a vacation since 2019, although she did escape to Arizona’s high country early this summer for several days.

But in July as vaccinations became the latest point of push-back from those questioning their efficacy or safety, the virus’ delta variant began rampaging across the country. Hospitals started to fill up again in states like Florida and Texas, where vaccination rates are low and the Republican governors issued orders banning mask or vaccine mandates.

Arizona Gov. Doug Ducey did the same and signed legislation passed by the Republican-controlled Legislature that bars schools from requiring masks and cities and towns from mandating vaccines.

Arizona’s health director, Dr. Cara Christ, said in an Aug. 6 blog post that 89% of the state’s cases and virtually all the hospitalizations and deaths were among people who either were only partially vaccinated or in most cases not vaccinated at all. Christ recently left the position for a job in the private sector.

Maloney said she spoke with a nurse who recently returned from working in an out-of-state hospital hit by the delta variant’s summer surge and was struck by what he said.

Days later, she saw the closed doors of her ICU unit and knew her days of battling COVID-19 were back.

She and her fellow nurses have built a camaraderie and are certain that they can get through one more surge of virus cases. But she knows some walk away after a 12-hour shift thinking what they’ve done is futile.

One of the hospital’s doctors said he thinks “all of us are suffering from PTSD, and we don’t know it,” she said. “So, I don’t know. I don’t know.