As health care workers in the U.S. began lining up for their first coronavirus vaccines on Dec. 14, Esmeralda Campos-Loredo was already fighting for oxygen.

The 49-year-old nursing assistant and mother of two started having breathing problems just days earlier. By the time the first of her co-workers were getting shots, she was shivering in a tent in the parking lot of a Los Angeles hospital because no medical beds were available. When she gasped for air, she had to wait all day for relief due to a critical shortage of oxygen tanks.

Campos-Laredo died of covid on Dec. 18, one of at least 400 health workers identified by The Guardian/KHN’s Lost on the Frontline investigation who have died since the vaccine became available in mid-December, narrowly missing the protection that might have saved their lives. 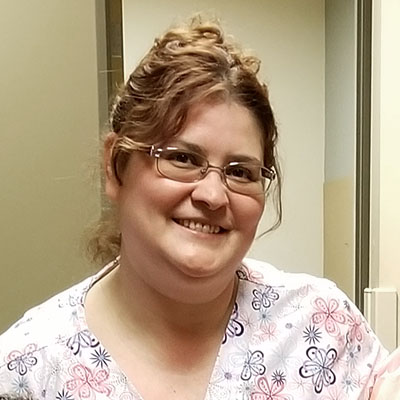 “I told her to hang in there, because they are releasing the vaccine,” said her daughter Joana Campos. “But it was just a little too late.”

In California, which became the epicenter of the national coronavirus surge following Thanksgiving, 40% of all health care worker deaths came after the vaccine was being distributed to medical staff members.

An analysis of The Guardian-KHN’s Lost on the Frontline database indicates that at least 1 in 8 health workers lost in the pandemic died after the vaccine became available. Unlike California, many states do not require a thorough reporting of the deaths of nurses, doctors, first responders and other medical staff members. The analysis did not include federally reported deaths in which the name was not released and may be missing numerous recent deaths that have not yet been detected by The Guardian and KHN.

The vaccine is now widely available to health care workers around the country and since mid-January, and covid-19 cases have been trending downward in the United States. 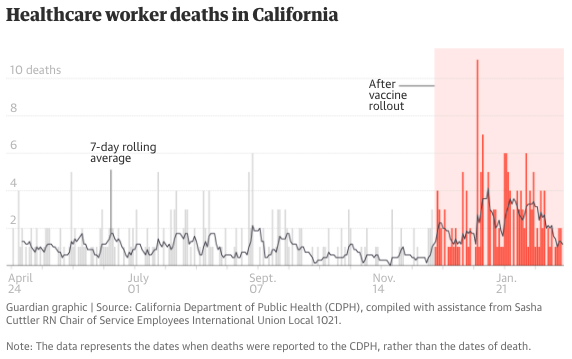 Sasha Cuttler, a nurse in San Francisco, has been gathering health care data for one of California’s nursing unions. Cuttler was alarmed and disheartened to see the number of deaths still surging weeks after the vaccination became widely available. “We can prevent this. We just need the means to do it,” said Cuttler, who noted that, nearly a year into the pandemic, some hospitals still lack adequate protective gear and proper staffing. “We don’t want to be health care heroes and martyrs. We want a safe workplace.”

Though she worked on what was considered a relatively low-risk postpartum care unit, she was advocating for her colleagues in the intensive care unit, many of whom were overwhelmed by the number of patients they were responsible for. 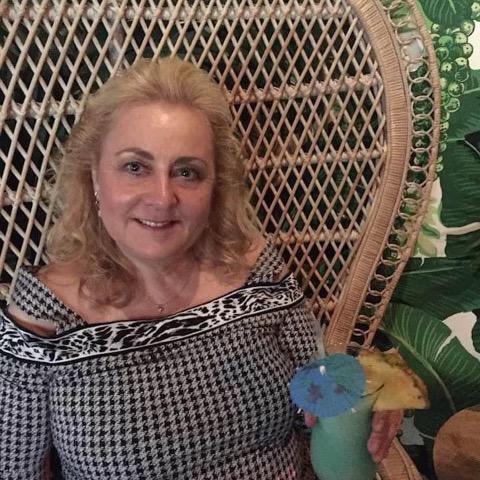 “We know what it’s like to work a full 12-hour shift and not be able to drink water or sit down or go to the bathroom,” Clayborne told the Stockton Record in August. “It’s been chaos.”

In mid-December, Clayborne, who had asthma, became ill in mid-December. She had been exposed to a patient who hadn’t yet been diagnosed with covid, said her daughter Ariel Bryant. Clayborne died on Jan. 8.

“She was the best mom and grandmother — and she was a great role model for me,” said Bryant, who herself became a nurse. Bryant works in an intensive care unit in Southern California — as the same type of nurse her mother fought so hard to protect.

If the vaccine had come just a few days earlier, it might have saved Tennessee fire chief Ronald “Ronnie” Spitzer and his department’s dispatcher, Timothy Phillips.

Spitzer and his crew from the Rocky Top Fire Department were called to a medical emergency on Dec. 11 but weren’t told until later that the patient had tested positive for covid. Both Spitzer, 65, and the firefighter who accompanied him came down with the virus. A few days later, Phillips became ill as well.

Spitzer, a 47-year firefighting veteran, was already hospitalized when his co-workers got their first doses of the vaccine in January, according to Police Chief Jim Shetterly. He died on Jan. 13, and Phillips, 54, died a few days later.

Tell Us A Health Worker’s Story

Do you know of a colleague or loved one who should be included in the “Lost On The Frontline” series? Please share their story.

Shetterly said his town of 1,800 has been shattered by the losses. “Everyone knows everyone here. It’s tragic when it hits the nation. But, when it’s in your town, it really hits home,” he said.

“When there are more patients in, there’s more chaos in the hospitals and it’s harder for workers to be safe,” he said. During the recent surge, “we had nurses breaking down because of the influx of patients and the emotional and physical toll that took on workers.”

Even once all health care workers are vaccinated, he said, health care administrators would need to remain vigilant on worker safety.

He said that surge preparations, extra safety equipment, contingency staffing plans and facilities like negative-pressure rooms to stop disease from spreading around hospitals should be a regular part of preparing for potential future pandemics.

This story is part of “Lost on the Frontline,” an ongoing project from The Guardian and Kaiser Health News that aims to document the lives of health care workers in the U.S. who die from COVID-19, and to investigate why so many are victims of the disease. If you have a colleague or loved one we should include, please share their story.