There have been a handful of rare reports of blood clotting in younger people, particularly younger women under the age of 55, following the AstraZeneca jab. The vaccine is not associated with an increase in the overall risk of blood clots in those who receive it, however. What’s more, health bodies are yet to establish a causal connection. Nonetheless, the risk to younger people is not entirely surprising, said Paul Hunter, medical microbiologist at the University of East Anglia.

Speaking to Sky News, he said: “It would not be surprising from what we know about cerebral venous sinus thrombosis (CVST) before Covid that it would be particularly younger people and particular younger women who would be more at risk than other age groups and genders within society.”

As he explained, CVST is a very uncommon disease – it was thought to be two to five cases per million people a year.

“It is still pretty rare and uncommon in people with vaccine but this is something that still needs to be looked at,” Professor Hunter added. 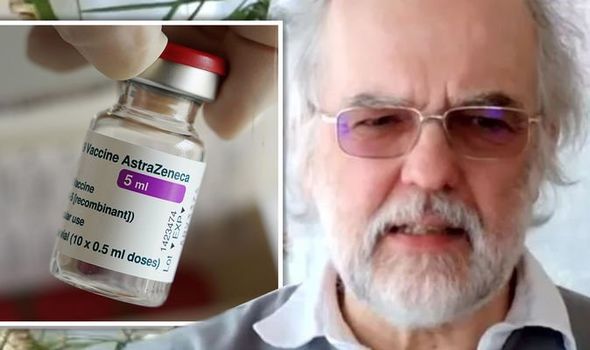 CVST occurs when a blood clot forms in the brain’s venous sinuses – the clot keeps blood from draining out of the brain.

The MHRA has said it has received 22 reports of CVST and eight reports of “other thrombosis events with low platelets [the cells involved in clotting]” following use of the Oxford-AstraZeneca jab.

It is important to put these numbers into perspective – this is out of a total of 18.1 million doses given up to and including 24 March.

Professor Hunter was also keep to emphasise the overwhelming benefits of receiving the AstraZeneca vaccine.