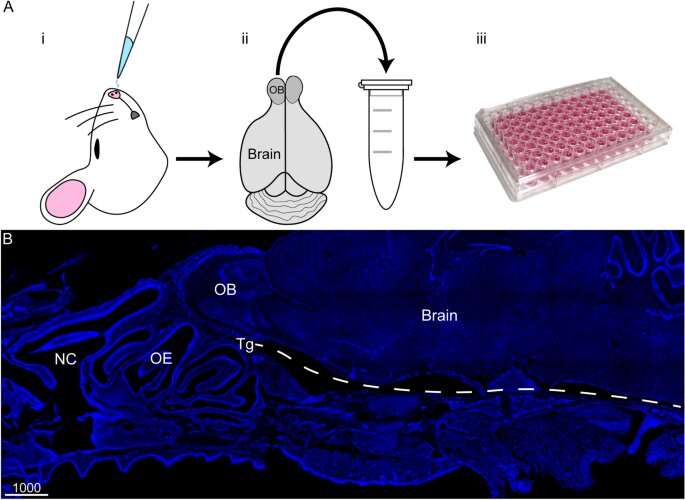 New research from Griffith University has shown that a bacterium commonly present in the nose can sneak into the brain and set off a cascade of events that may lead to Alzheimer’s disease.

Associate Professor Jenny Ekberg and colleagues from the Clem Jones Centre for Neurobiology and Stem Cell Research at Menzies Health Institute Queensland and Griffith Institute for Drug Discovery, in collaboration with Queensland University of Technology, have discovered that the bacterium Chlamydia pneumoniae can invade the brain via the nerves of the nasal cavity.

While this bacterium often causes respiratory tract infections, it has also been found in the brain which has raised the question of whether it causes damage to the central nervous system.

The research team has performed extensive research in animal models to show not only how the bacteria gets into the brain, but also how it leads to Alzheimer disease pathologies.

“Our work has previously shown that that several different species of bacteria can rapidly, within 24 hours, enter the central nervous system via peripheral nerves extending between the nasal cavity and the brain,” Associate Professor Ekberg said.

“With this background knowledge we were able to track how this new bacterium, Chlamydia pneumoniae can also sneak past the blood-brain barrier and quickly enter the brain.”

The new study shows that once the bacteria are in the central nervous system, the cells of the brain react within days by depositing beta amyloid peptide, which is the hallmark plaque of Alzheimer’s disease.

After several weeks, numerous gene pathways that are known to be involved in Alzheimer’s disease are also dramatically activated.

The research also showed that when the bacteria invade the olfactory nerve, peripheral nerve cells (glial cells), become infected and these cells may be how the bacteria can persist within the nervous system.

“These cells are usually important defenders against bacteria, but in this case, they become infected and can help the bacteria to spread,”‘ Associate Professor Ekberg said.

“Now that we have this new evidence, it gives us the drive to urgently find treatments to stop this contributing factor to Alzheimer’s disease.

While the studies were conducted in mice, humans have the same nerves and can be infected by the same bacteria, so the researchers believe the results are translatable to humans.

“We are already working on treatment options. With the Griffith Institute for Drug Discovery, we are identifying potential drugs that can help the glial cells to destroy the bacteria which are already in the brain.