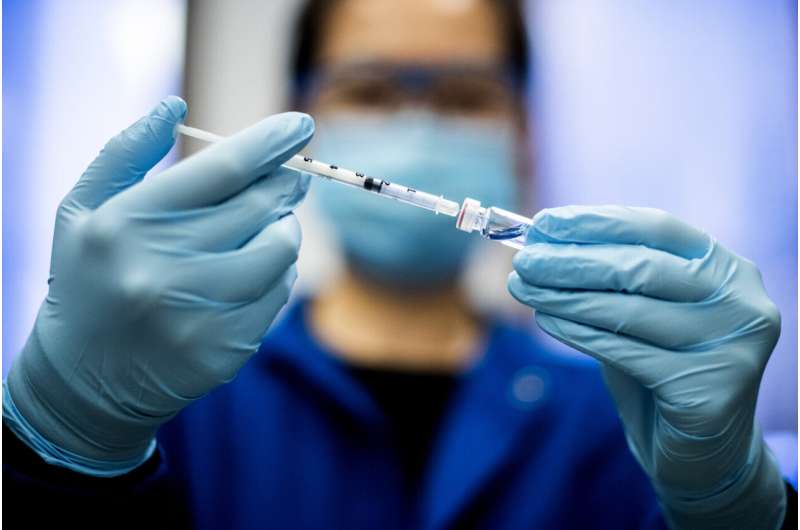 A new COVID-19 booster could be available as soon as September thanks to a fast-tracked process that has some scientists questioning its safety. But some Northeastern health science experts say pre-existing knowledge about COVID-19 vaccines should quell any concerns, and that potential risks are vastly outweighed by the rewards of getting a new booster out before the virus has had time to mutate further.

“We would never do this if there was a concern about the health and safety of individuals and the greater public,” Neil Maniar, professor of practice at Northeastern’s Bouve College of Health Sciences, says. “This would never take place if we didn’t have a pretty robust body of clinical data to accompany this.”

Maniar emphasizes the importance of fighting current variants before COVID-19 has had the chance to mutate into something new. “COVID will continue to evolve; it’s just the nature of this virus,” he says.

Vaccine developers Pfizer and BioNTech have asked the U.S. Food and Drug Administration to authorize a booster that provides protection against the omicron subvariants BA.4 and BA.5, the companies announced Monday. Those subvariants account for 90% of U.S. cases, according to the Centers for Disease Control and Prevention. The companies said they have already ramped up production for September distribution in an effort to prevent a winter surge in cases.

This booster is part of a federal strategy, announced this summer, to develop strain-specific boosters as the COVID-19 vaccine continues to mutate, instead of expanding access to pre-existing boosters to people under 50. The hope was that the booster could be developed and distributed before the virus has had time to evolve further, and a new variant emerges.

Now, only months later, the booster could be ready to go. “Having rapidly scaled up production, we are positioned to immediately begin distribution of the bivalent omicron BA.4/BA.5 boosters, if authorized, to help protect individuals and families as we prepare for potential fall and winter surges,” said Albert Bourla, Pfizer chairman and chief executive officer, in a statement.

The speed is thanks to an expedited strategy that skips common steps in the testing process. While there will be a human study starting this month, the booster has only been tested on mice, causing some scientists to question whether the data is enough to ensure the safety and efficacy of the booster. The earliest studies in the development of a COVID-19 vaccine used non-human primates as well before conducting clinical trials in humans, says Mansoor Amiji, distinguished professor at Northeastern University’s Department of Pharmaceutical Sciences.

But it’s a “misconception,” Maniar says, that the booster is being developed using only mice data, considering how much we now know about the underlying technology of the vaccines. “It’s not that we’re looking at something totally new,” he says. “What we’re looking at is an evolution of something that we already have a good amount of data on,” including real-world evidence of effectiveness worldwide. The mice data, he says, is really conducive to understanding the booster’s effectiveness against BA.4 and BA.5.

There’s also precedent for an expedited process like this, according to Brandon Dionne, associate clinical professor at Northeastern’s Bouve College of Health Sciences. With the influenza vaccine—which is developed each year based on a predictive model of which strains will be prevalent in a given year—the manufacturer only has to get FDA approval using testing on humans once. “Then annual updates to the inactivated vaccines are through a supplement to the license, which doesn’t require additional clinical [human trial] data since they’re based on the same manufacturing/technology platform,” he says.

There are important advantages to doing lab trials with mice, which are by far the most commonly used lab animal. Genetically, they’re close to humans. And pre-clinical testing can be tightly controlled when using mice, Amiji says. Models of mice can be “fairly homogeneous,” he says. Researchers can control for sex and breed, and the results can provide useful data on safety and efficacy of a drug.

They can even control the genetic structure of the mice, which is important in the case of COVID-19. Normally, mice cannot contract COVID-19, so researchers use “humanized models” of mice that carry a human-specific receptor that is required for the virus to bind. According to Amiji, these mice are engineered at the embryonic level, and then pass the receptor on to their offspring. Otherwise, the mice, which were in high demand in the leadup to developing the original vaccine, are totally normal.

Unfortunately, solely using mice to test a drug “doesn’t give you a full picture” of its safety and efficacy, Amiji says. The very thing that makes mouse data helpful—it’s homogeneity—also brings disadvantages in that it’s not representative of the human population, which varies greatly by age, comorbidities, diet, ethnicity and gender. “All of that really doesn’t get captured at the mouse level,” he says. “Even at the primate level, you are still working with a fairly homogeneous group.”

And sometimes, the data doesn’t translate. A poor outcome in a mouse trial will likely also occur when testing more complex species, Amiji says, but this is less common for a good outcome.