A group of bipartisan lawmakers intends to compel insurers to streamline prior authorization processes for Medicare Advantage plans, including a bid to end the use of faxes and develop systems that can allow for real-time decisions.

Reps. Suzan DelBene (D-WA), Mike Kelly (R-PA) Ami Bera, MD, (D-CA) and Larry Bucshon, MD, (R-IN) on May 13 introduced a bill that would task federal officials with refining standards regarding prior authorization for Medicare Advantage. Titled the Improving Seniors’ Timely Access to Care Act of 2021, the bill would direct the Department of Health and Human Services (HHS) to create rules intended to make prior authorization more transparent and speedy for the insurer-run Medicare plans. Known as Medicare Advantage, these plans cover about 24.1 million people of the 62 million enrolled in the giant federal health program, according to the nonprofit Kaiser Family Foundation. 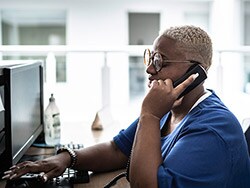 These revamped prior authorization systems could not rely on faxes nor could they employ proprietary payer portals that did not meet HHS’ standards, says the text of the bill released by DelBene. Insurers would also have to report to the Centers for Medicare & Medicaid Services (CMS) about the extent of their use of prior authorization and the rate of approvals or denials. The bill seeks to encourage plans to adopt prior authorization programs that adhere to evidence-based medical guidelines in consultation with physicians.

There were several reasons for focusing on Medicare Advantage plans, although prior authorization concerns extend more broadly in the US healthcare system, said Susan Bailey, MD, president of the American Medical Association (AMA).

There’s strong support for streamlining prior authorization both in the medical community and in Congress.

The bill has the support of about 70 healthcare organizations, including the AMA and the American Academy of Family Physicians, according to its sponsors. As of May 17, the bill had attracted the backing of 97 members of the House of Representatives, roughly evenly split among Democrats and Republicans.

DelBene’s previous version of this bill, the Improving Seniors’ Timely Access to Care Act of 2019, attracted 143 Democratic cosponsors and 137 Republican ones, or more than half of the members of the House. This bill was not completed during the previous session of Congress (January 2019-January 2021) because of the more urgent needs of pandemic response, said Bucshon, who practiced cardiothoracic surgery before joining Congress.

“It wasn’t quite on the radar as much as it might have been if we didn’t have COVID,” Bucshon said.

Bucshon said he expects strong Senate support for a companion measure of the House bill, which could make the difference for efforts to pass it this year.

Insurers have become more aggressive over time in denying payments through prior authorization systems for services that physicians say their patients need, according to Bucshon. There may be some “bad actors” in medicine who would order unnecessary procedures, Bucshon allowed, but in most cases, the cumbersome prior authorization processes only put a hurdle for patients seeking needed treatments, he said.

“The premise is that it controls healthcare costs but actually what it does is it helps insurance company’s bottom line,” Bucshon said.

In a prepared statement, former Pennsylvania congresswoman Allyson Y. Schwartz, now CEO of the Better Medicare Alliance, said her group had spoken with sponsors of this legislation and appreciates “their receptiveness to feedback in this process.”

“Prior authorization ensures beneficiaries receive clinically appropriate care and reduces exposures to duplicative and unnecessary services,” Schwartz said. “We share an interest in ensuring prior authorization works as smoothly and effectively as possible for beneficiaries while protecting its essential function of facilitating safe, evidenced-based care.”

The Better Medicare Alliance said its funders include UnitedHealth, Humana, and CVS Health/Aetna, which run Advantage plans. The group also lists as its partners many medical organizations.

Like Bucshon, Bailey sees a different motivation in insurers’ persistence in keeping the prior authorization process cumbersome.

Phone calls and faxes remain the key methods for handling prior authorization for medical services, according to the results of a survey done by the AMA in December. Phone calls were always or often required for prior authorization for medical services (59%), with faxes the second most common approach (46%), followed by health plans’ online portals (39%), electronic health records and practice management systems (29%), and email or US mail (26%), according to the AMA’s report on the survey.

“It seems like every step in the process is designed to make the patient less likely to get the therapy that the doctor thinks that the patient needs,” Bailey said. “It’s almost like rationing care by hassling the patient and the physician.”

The findings of an investigation by HHS’ internal watchdog unit appear to support Bailey’s view, showing that insurer-run Medicare plans had a pattern of often walking back their initial rejections.

In 2018, the Office of the Inspector General (OIG) for HHS reported that Medicare Advantage organizations (MAOs) overturned 75% of their own denials during 2014-16. And, independent reviewers within the appeals process overturned additional denials in favor of patients and clinicians, OIG said.

“The high number of overturned denials raises concerns that some Medicare Advantage beneficiaries and providers were initially denied services and payments that should have been provided,” the OIG said in the report. “This is especially concerning because beneficiaries and providers rarely used the appeals process, which is designed to ensure access to care and payment.”

During 2014-16, patients and clinicians appealed only 1% of denials to the first level of appeal, OIG said. In the report, the watchdog group noted that Centers for Medicare & Medicaid Services audits had highlighted “widespread and persistent MAO performance problems related to denials of care and payment.” In 2015, for example, CMS cited 56% of audited contracts for making inappropriate denials.

Bailey also told Medscape that she routinely encounters problems with prior authorization in her own practice as an allergist and immunologist in Fort Worth, Texas.

In late May, for example, a Medicare Advantage plan made a patient whose chronic asthma had been stable for years change to a new inhaler that resulted in him developing a yeast infection in his mouth, Bailey said.

“We treated the yeast infection, made some changes in the way he uses his inhaler, so hopefully he would tolerate it better,” Bailey said. “He had a reaction to the medication to treat the yeast infection and ended up in the hospital. How is that helping anyone? It certainly hasn’t helped my patient.”

Bailey said insurers have also asked to seek prior authorization to prescribe medications that have been generic for years and have used the process to challenge her on cases of what seem to be common sense in medical practice. This included a bid to have Bailey prescribe a medication in pill form for a 6-month-old baby who had no teeth.

“Every doctor has got absurd stories like that, but unfortunately, every doctor is going to have tragic stories where prior authorization has resulted in death and harm to the patients,” Bailey said.

Some physicians leave it to the patient to try to overcome insurers’ decisions on prior authorization, seeing this task as falling outside of their duties, Bailey said.

“I don’t do that. I fight. I spend a lot of time fighting. I don’t like to lose. I don’t like my patients to lose, so I will go to the mat for them,” Bailey said. “But I’m blessed to be in a specialty where I’ve got loads more control over my schedule than many other specialties do.”

Kerry Dooley Young is a freelance journalist based in Washington, D.C. She is the core topic leader on patient safety issues for the Association of Health Care Journalists. Young earlier covered health policy and the federal budget for Congressional Quarterly/CQ Roll Call and the pharmaceutical industry and the Food and Drug Administration for Bloomberg.  Follow her on Twitter at @kdooleyyoung.