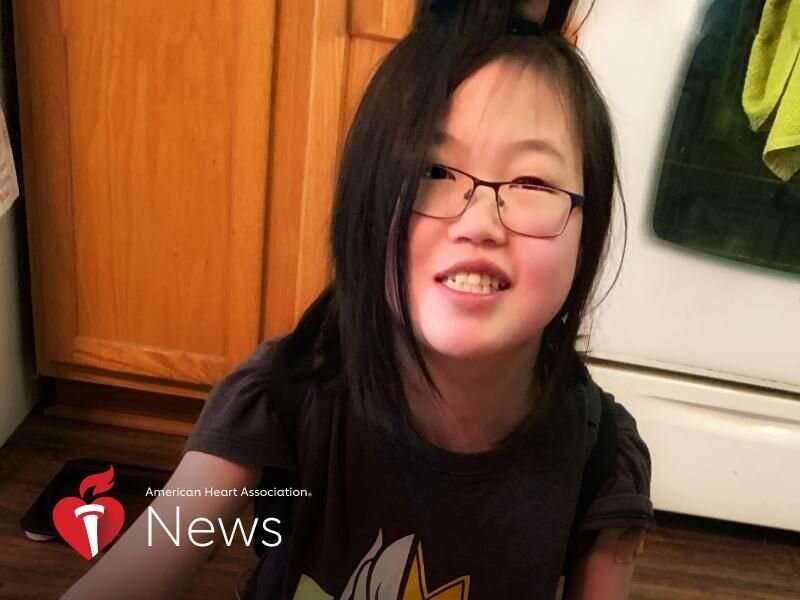 Four years after Jamie Jennings started the adoption process to be a single mom, she got the call at 3 a.m. A 1-year-old girl in China with a congenital heart defect needed a home. Jamie had 48 hours to decide whether this girl would become her daughter.

Jamie looked first at the medical file. Before falling in love with the girl’s picture, Jamie wanted to make sure she could handle the heart issue. To help her decide, she consulted a pediatrician and a cardiologist.

“I finally looked at her picture at four or five in the morning, and I said, “‘She’s pretty cute,'” said Jamie, a middle school librarian in San Antonio.

Four months later, she boarded a plane to China to bring her daughter home.

The toddler was called Feng Binq Qing, or “blue ice,” in her orphanage. It was because her heart defects left her cold and blue. Jamie named her Grace after a favorite teacher colleague.

In the following years, Grace kept up with her peers. She played with friends and learned how to ride a bike. But if she worked too hard, her lips turned blue.

Grace was in third grade when Jamie noticed the girl’s energy was waning. In fourth and fifth grade, “she had no stamina,” Jamie said. “It was kind of scary.” Not long after, a new cardiologist said Grace had a leaky heart valve. A medication was supposed to help. It didn’t.

As the start of sixth grade approached, Jamie scheduled an appointment to discuss an operation at a children’s hospital in Austin. But before that day came, Grace collapsed at school and was taken to the ER. She was in heart failure.

On the way to the children’s hospital in Austin, Grace said, “Mama, I don’t want to die.”

As doctors worked to get her out of heart failure, her spirits were good. She often played chess with a nurse. Then she went into cardiac arrest.

After doctors resuscitated her, Grace was placed on a machine that pumped and oxygenated her blood. A week later, her doctor implanted a left ventricular assist device, or LVAD, in her chest to improve blood flow.

The surgery was tricky because Grace also has heterotaxy, a rare condition in which a person’s organs are abnormally arranged inside their chest and abdomen.

The LVAD was only supposed to be temporary. Grace needed a new heart.

Two weeks later, Grace had a stroke. Luckily, there was no lasting damage. In fact, she returned to school and earned A’s and B’s.

A few months later, Jamie and Grace were at home playing video games when Grace complained her controller wasn’t working. Jamie tried it and it worked fine. Grace was angry and her hand shook. Jamie called the LVAD coordinator.

The coordinator said to have Grace smile. It came out lopsided, a telltale sign of another stroke. Jamie called 911. Grace went by ambulance to her local hospital, then by helicopter to the Austin hospital.

Doctors said Grace needed to remain hospitalized until the transplant. They wound up spending Christmas and Grace’s 13th birthday there.

“It’s so bittersweet because you know someone lost a child for your child to have life,” Jamie said. “I’m so thankful that in their time of despair the donor’s family chose to give life.”

When they arrived home, Grace was nervous her heart would fail. She didn’t want to be alone. So Jamie and Grace plastered sticky notes around the house that said “Thor is strong” and “Thor won’t fail.”

Grace, now 14 and in eighth grade, is excited about her future. She’s learning clarinet and how to skateboard and wants to be in marching band.

“I love reading, and I want to be a scientist,” Grace said. “I want to do track next year. I’m getting used to what having a normal heart feels like.”

Her last stroke caused problems focusing, and she lost some peripheral vision. She’s still in physical and occupational therapy. She and Jamie also benefit from therapy to talk about the trauma they’ve endured.