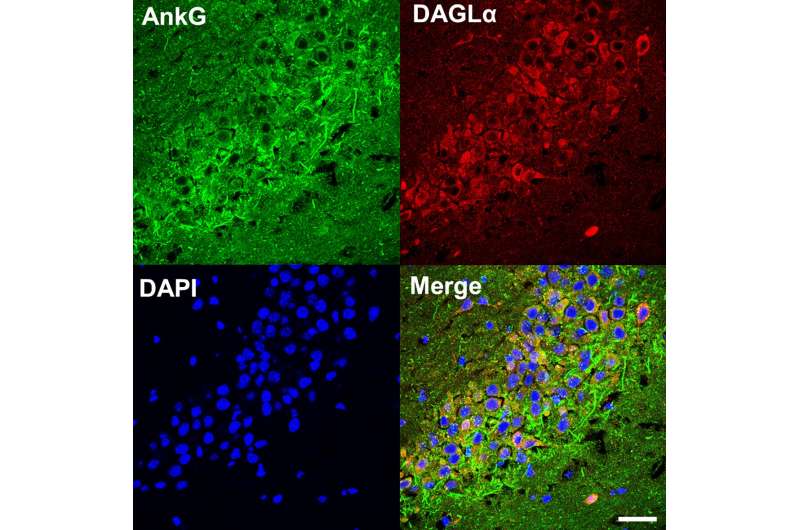 Northwestern Medicine scientists discovered an unexpected connection between a synapse protein that has been implicated in neuropsychiatric disorders and the endocannabinoid pathway, according to a study published in Biological Psychiatry.

These findings suggest a role for the endocannabinoid system in conditions including bipolar disorder, according to Peter Penzes, Ph.D., the Ruth and Evelyn Dunbar Professor of Psychiatry and Behavioral Sciences, professor of Physiology and Pharmacology, and senior author of the study.

“The endocannabinoid system could be disrupted in patients with bipolar disease, or it could be the opposite: medical marijuana could have therapeutic potential for these patients,” said Penzes, who is also director of the Center for Autism and Neurodevelopment. “These are the questions that need to be answered.”

Cannabis has an effect on humans because it mimics endocannabinoids, chemicals occurring naturally in the brain. While the specific function of endocannabinoids is still not fully understood, the legalization of marijuana in many U.S. states has prompted more investigation into its biological pathways, Penzes said.

Endocannabinoids are produced by an enzyme called diacylglycerol lipase alpha (DAGLA), which is concentrated in synapses. Endocannabinoids dampen synaptic strength, one reason for the calming effects of marijuana.

Penzes and his collaborators have previously studied ankyrin-G, another synapse protein that regulated the speed of transmission across synapses. Aberrant expression of ankyrin-G—either too much or too little—has been associated with disorders such as bipolar disorder, schizophrenia and autism.

These findings comport with another recent study, led by investigators at Icahn School of Medicine at Mount Sinai and published in Nature Genetics. The study showed that both DAGLA and ankyrin-G (ANK3) are risk genes for bipolar disorder in a genome analysis of over 40,000 patients.

“It’s almost like somebody who is leading a double life, Dr. Jekyll and Mr. Hyde,” Penzes said. “Ankyrin-G has this entire separate function.”

The convergence of ankyrin-G with the endocannabinoid pathway opens up an entire new world of possibilities, both for investigating disease risk and possible therapies.

“Cannabis may contribute to increased risk for mental disorders, which has actually been shown in schizophrenia,” Penzes said. “Conversely, cannabis could be beneficial in some brain disorders, which prompted trials of medical marijuana in patients with autism.”