Carrying a child in a baby sling or wrap could put them at risk as infants can fall out or a wearer can trip over, study warns

Fashionable baby slings and carriers could lead to babies being injured, parents have been warned.

A study in the US analysed more than 14,000 cases of children aged five years old or younger, hurt between 2011 and 2020 while being transported in baby carriers, slings, harnesses and wraps.

More than half of the injuries occurred when the child fell out of the carrier.

More than a fifth took place because the person carrying the child fell over.

Baby slings in particular have become increasingly popular, being thought to increase bonding between parents and children, and improve breastfeeding success. 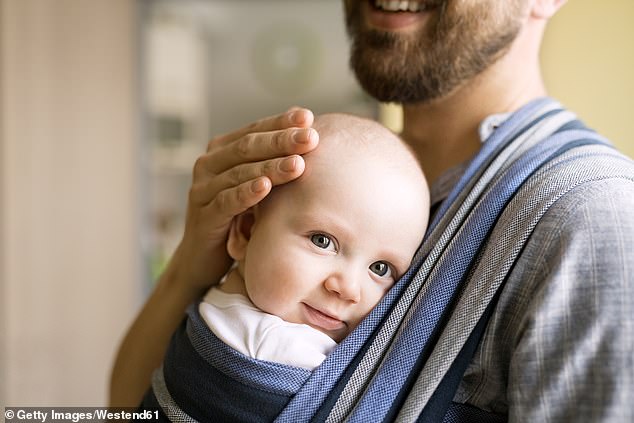 The study analysed more than 14,000 cases of children aged five years old or younger, hurt between 2011 and 2020 while being transported in baby carriers, slings, harnesses and wraps (file photo)

But the study found almost two-thirds of injuries from carriers happened in babies no older than five months, and 19.3 per cent of these infants required hospitalisation.

Dr Samantha Rowe, from Walter Reed National Military Centre in Maryland, who led the study, said: ‘The most precious thing a parent will ever wear is their child.

‘But like when buying a new pair of shoes, parents must be educated on the proper sizing, selection and wear of baby carriers to prevent injury to themselves and their child.’

The study, presented at the national conference of the American Academy of Pediatrics (CORR), found more than 83 per cent of children aged five months and younger injured through ‘baby-wearing’ products suffered head injuries.

Among all the children looked at, almost 60 per cent had a concussion or traumatic brain injury.

The authors found products on the market designed with additional space in the chest for breastfeeding women, which may increase the risk of injury to children when they are worn by men.

The authors conclude: ‘Baby-wearing is an old childcare technique that has received new life.

‘Yet for all of its suggested benefits – better couplet bonding, parental freedom to complete activities of daily living, and exposure of the infant to new environments – there is a catch.’

They recommend education for parents on the proper use of carriers, the recommended age of children, and potential risks.