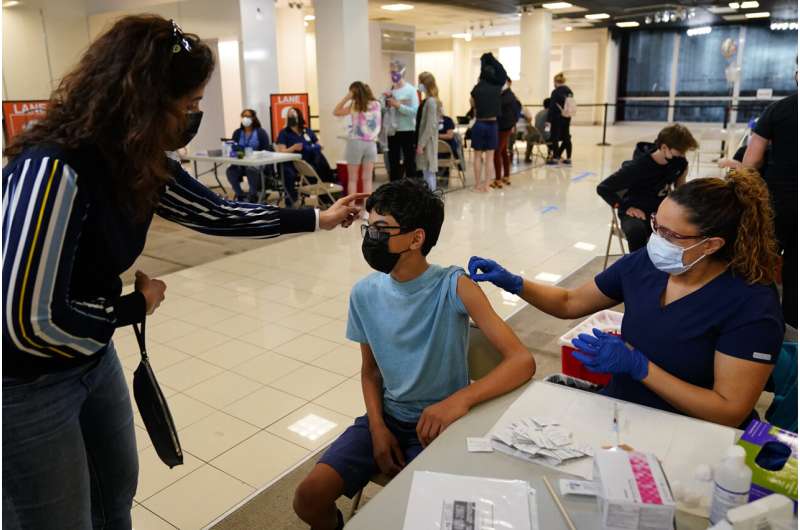 States are rolling out Pfizer’s COVID-19 shots to pediatricians and even some school vaccine clinics as they prepare to vaccinate millions of kids as young as 12.

Federal health advisers were meeting Wednesday to issue recommendations on how to vaccinate those 12 to 15 years old with the shot. Earlier in the week, the Food and Drug Administration cleared expanded use of Pfizer’s shots, citing evidence they worked as well for the younger age group as for those 16 and older.

While kids in some places already are rolling up their sleeves, much of the nation is awaiting the recommendations from advisers to the Centers for Disease Control and Prevention. Among the outstanding questions: Is it OK to get vaccinated against COVID-19 at the same doctor’s visit as kids receive some routine vaccinations, such as the HPV shot?

Doctors who are ready to vaccinate their own kids want other parents to line up, too.

“Their lives have been really disrupted by this virus,” said Dr. Anne Zink, Alaska’s chief medical officer and president-elect of the Association of State and Territorial Health Officials.

Zink described how her already vaccinated 16-year-old loves hanging out with unmasked friends while “my 13-year-old pouted away and said, ‘I can’t wait for mine'”—shortly before learning she will get a turn, too.

The FDA on Monday authorized use of Pfizer’s vaccine in younger teens after a study of more than 2,000 12- to 15-year-olds found it offers strong protection. There were no cases of COVID-19 among volunteers given the two-shot vaccination compared with 16 in the group given dummy shots. Kids got the same dose as adults but developed even higher levels of virus-fighting antibodies.

Side effects are the same as adults experience, mostly sore arms and flu-like fever, chills or aches that signal the immune system is revving up. But not surprisingly they were a little more common in the kids. Headache, for example, occurred in half of people 16 and older but in three-quarters of the younger teens in Pfizer’s studies.

Vaccinating Americans of all ages will be critical to getting back to normal, and there’s plenty of supply for the nation’s nearly 17 million 12- to 15-year-olds.

In addition to the mass vaccination sites and health department rollouts that were key for adults, many states will be offering kids more familiar options—shipping doses to pediatricians and even to schools. In Alaska, for example, Zink said some schools were set to hold vaccination clinics in cafeterias in the coming days.

Pfizer is not the only company seeking to lower the age limit for its vaccine. Moderna recently said preliminary results from its study in 12- to 17-year-olds show strong protection and no serious side effects, data the FDA will need to scrutinize.