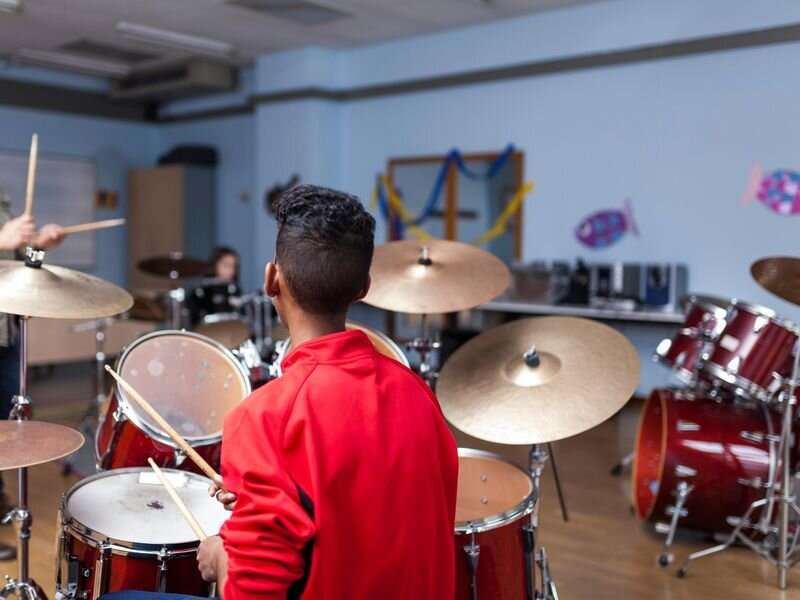 The percussive skill needed to bang out rhythms on a drum may help improve socializing, inhibition control and focus among teens with autism, new research suggests.

The finding follows work with 36 teens with an autism spectrum disorder.

Half were randomly chosen to receive two months’ worth of drum training, based on a standard electronic drum kit program.

Designed so that it could track each teen’s motor performance and timing accuracy, the program “consisted of learning to perform a series of repetitive rhythm patterns,” explained lead author Marie-Stephanie Cahart.

The upshot: Learning to drum appeared to reduce hyperactive behavior and improve teens’ ability to focus and pay attention, she said. The activity also seemed to enhance communication “between brain regions responsible for inhibitory control, action-outcome monitoring, and self-regulation.”

Cahart is a doctoral candidate at the Institute of Psychiatry, Psychology and Neuroscience at King’s College London in the United Kingdom.

She noted that autism is a lifelong neurodevelopmental condition marked by deficits in social communication and interaction, as well as a range of repetitive interests, activities and behaviors.

Those deficits often show up as a lack of inhibition, impulsiveness, attention problems, and hyperactive behavior, Cahart said. But drumming requires “motor planning and timing accuracy” as well as focused attention and inhibition control, she said. Other small studies have also investigated drumming as an autism intervention.

To see if it could be of help, researchers tested a drumming program among three dozen teens (average age 18). None had drummed before.

Those assigned to drum training were given two 45-minute sessions a week for eight weeks. The other group received no drum training.

All underwent brain scans and neuro-psychological testing both before and after the study. Severity of autism symptoms was also assessed for all.

By the study’s end, caregivers and drum tutors reported that participants who received drum training had better ability to make eye contact, verbalize their needs and regulate their emotions, Cahart said. As a result, participants’ self-esteem was better and there were fewer angry outbursts, according to the caregivers and tutors.

Plus, young people in the drumming group “reported that they really enjoyed learning to drum,” Cahart said.

“It is now clear that drumming activities are particularly relevant in the context of autism spectrum disorders,” Cahart said, suggesting that the activity—even if it’s not yet considered an autism “treatment,” per se—would likely confer benefits to patients with “a wide range of ability levels and autism symptoms.”

Why? Cahart pointed to the emphasis that drumming places on timing, hand-eye coordination and the need to continuously monitor and correct mistakes—all of which enhance the attention, inhibition and thinking skills that are keys to “social outcomes and physical and mental health well-being.”

Plus, “percussion activities are also enjoyable and accessible to everyone, regardless of ethnicity, age range and musical background,” she added.

“Most importantly, [they] offer a non-verbal means of self-expression, thus making them particularly suitable in the context of autism spectrum disorders,” Cahart said.

Donna Murray, vice president and head of clinical programs at Autism Speaks, said she is not aware of drumming being specifically deployed as an autism intervention.

At the same time, she suggested that the potential benefit be viewed in the overall context of music therapy, which “is a common supplemental therapy” for people with autism.

Music therapies designed “to address motor coordination, synchronization and even tapping to enhance verbal communication have been successful in improving outcomes, in a number of conditions,” Murray added.

In this instance, she noted, the findings suggest that drumming may have a positive impact in several areas of concern for people with autism, including attention and focus, inhibition and motor control, and better timing.

“More research is needed to determine type of drumming intervention, how much, and for whom it may be beneficial,” she said.