It’s probably the last thing you want to do while starving on a diet.

But going an intense run could beat those junk food cravings during a calorie deficit, a study suggests.

In an experiment on rodents, scientists found strenuous physical activity curbed their desire to eat high-fat pellets after a month on a restricted diet.

Hormonal changes that occur when we do high intensity exercise is known to have  an appetite-suppressing effect in the short term.

The researchers said exercise could help people resist cues to consume fatty foods especially if they’ve been on a diet for a while and the cravings are starting to build.

Dr Brown, a neuroscientist at Washington State University who led the study, said: ‘We’re always looking for this magic pill in some ways, and exercise is right in front of us with all these benefits.’ 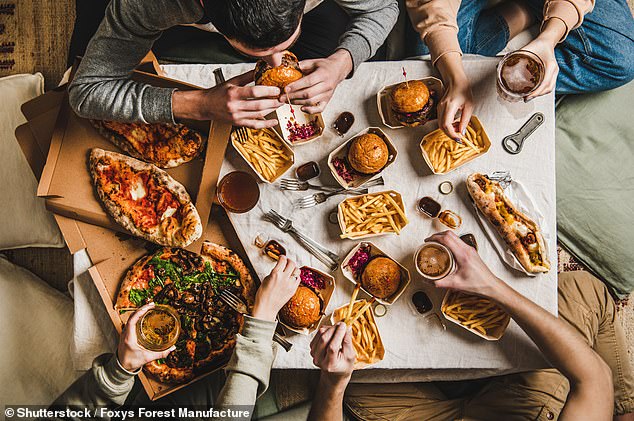 Obesity is a growing problem in the UK, with about a quarter of British adults and children classified as too fat.

The issue is even greater in America where about half of adults are considered obese.

Body mass index (BMI) is a measure of body fat based on your weight in relation to your height.

The latest experiment, published in the the journal Obesity set out to test a phenomenon called ‘incubation of craving’.

This is theory that the longer something is deprived from someone, the more they crave it.

The researchers trained two groups of 14 rats to pull a lever which when activated turned on a light and emitted a musical tone before dispensing a high-fat food pellet.

After the training, the researchers established a baseline of how frequently the rodents would press the lever to get a pellet.

They then split the rats into two groups, one of which underwent an intense exercise regime and other group did not as a control.

Scientists found the rats who exercised in their 30 day abstinence period pulled the lever significantly less than those who did not go on the workout regime.

Dr Brown said this indicates exercise helped curb the cravings for fatty foods in the rodents.

He said the team now plan to test how different levels of exercise influence this type of craving, as well as work out how exactly physical activity produces this resistance to cravings in the brain itself.

Dr Brown said whether food can be addictive the same way as drugs can is still an unsettled question for researchers, noting that ‘no one binge eats broccoli’.

HOW MUCH EXERCISE YOU NEED

To stay healthy, adults aged 19 to 64 should try to be active daily and should do:

A good rule is that 1 minute of vigorous activity provides the same health benefits as 2 minutes of moderate activity.

One way to do your recommended 150 minutes of weekly physical activity is to do 30 minutes on 5 days every week.

All adults should also break up long periods of sitting with light activity.