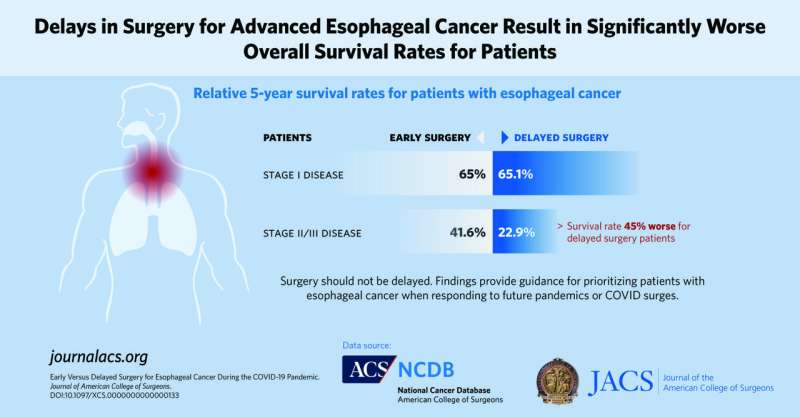 Delays in surgery for esophageal cancer did not appear to have much impact on patients’ relative survival for early-stage cancer compared with patients who had surgery early, but they did reduce the relative survival rate by almost half for patients with more advanced disease, according to an analysis of the National Cancer Database (NCDB).

The research is published as an “article in press” on the website of the Journal of the American College of Surgeons and is one of the earliest studies to examine the impact of an extended three-month delay in esophagectomy for esophageal cancer.

The relative survival rate indicates whether a disease shortens one’s life. It’s a way to compare survival of those who have a specific disease with those who don’t over a given period of time, typically five years from diagnosis date or the start of treatment for those with the disease, according to the National Cancer Institute.

“Timely care should always be the priority for patients,” said senior author Chi-Fu Jeffrey Yang, MD, a thoracic surgeon at Massachusetts General Hospital in Boston and an assistant professor of surgery at Harvard Medical School. “However, there were times during the COVID-19 pandemic when delays to cancer care occurred. This study, using pre-pandemic data, helps us understand the impact of the delay to care for patients with different stages of operable esophageal cancer.”

Added lead author Simar Singh Bajaj, a student at Harvard and a researcher in the department of surgery at Mass General, “When we looked at early versus delayed surgery for patients with stage I cancer, patients in both groups had similar five-year survival rates. However, for patients with stage II or III disease, delayed surgery was associated with worse survival when compared with early surgery.” Stage II and III esophageal cancer is more advanced than Stage I.

“This finding is especially important as we’re still working toward reintegrating services during the pandemic,” Mr. Bajaj said. “We’ve seen a lot of delays in care as hospitals have been overwhelmed with COVID patients.”

The researchers extracted pre-COVID-19 pandemic surgical cases for esophageal cancer from the NCDB, a joint project of the Commission on Cancer of the American College of Surgeons (ACS) and the American Cancer Society. The NCDB is estimated to include more than 75 percent of the newly diagnosed esophageal cancer cases in the United States.

At the start of the COVID-19 pandemic in March 2020, the Centers for Medicare and Medicaid Services announced that “all elective surgeries, non-essential medical, surgical, and dental procedures would be delayed during the 2019 Novel Coronavirus (COVID-19) outbreak” to preserve hospital resources to handle the pandemic. Some national medical societies issued triage guidelines for dealing with delays for a host of elective procedures. The ACS and the Thoracic Surgery Outcomes Research Network issued early guidance that recommended a three-month delay of surgery for esophageal cancer in hospitals with resources—intensive-care unit beds, ventilators, hospital staff—stretched thin by the pandemic.

When appointments could be scheduled again, cancer clinicians noticed patients were slow or unlikely to schedule regular cancer screenings. However, research findings are just starting to emerge to determine the impact that all of these delays may have had on patient outcomes, including survival for a variety of cancers.

“As we continue to move out of the COVID pandemic, surgeons are trying to address the backlog of patients with esophageal cancer. The point of this study is to consider how we should reintegrate services in such a way that it prioritizes patients that are most at risk,” Mr. Bajaj said.

That prioritization means patients with stage II/III esophageal cancer should get surgery “as soon as possible,” he said. Although the researchers found no difference in survival for early versus delayed surgery for patients with stage I esophageal cancer, he warned that’s not a valid reason to delay their care. “This study should not be used to recommend delays in any circumstance, just because for stage I disease we didn’t see that there was an adverse impact to survival when you delayed surgery,” he said. “Esophageal cancer surgery should always be performed as promptly as possible.”

The findings provide esophageal cancer guidance for responding to future pandemics or COVID surges, Mr. Bajaj said. “Triage is all about prioritizing patients and trying to treat the most vulnerable first in order to give them the best chance of survival,” he said.

“This study highlights the differences in early-stage and advanced-stage esophageal cancer and helps us to realize how important timely treatment is,” said Shanda H. Blackmon, MD, MPH, FACS, a thoracic surgeon at Mayo Clinic in Rochester, Minn., who was not involved with the study.

Being mindful of treatment delays for esophageal cancer patients is critical at any time, she said. “Many esophageal patients have significant delays in diagnosis as the majority of these patients don’t present until they’re symptomatic, and, frequently, by the time they do present, they have advanced disease,” Dr. Blackmon said.