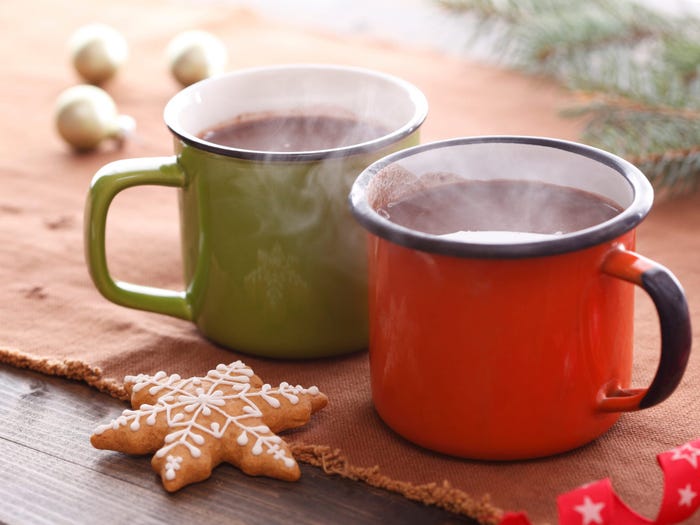 A cup of hot cocoa is not just a welcome treat on a cold winter's day, but could also help boost your brain power, a small new stu suggests.

Flavanols, a type of nutrient in cocoa, can improve blood oxygen levels in the brain and are linked to cognitive benefits, according to a small study published this week in Scientific Reports.

Researchers from the University of Birmingham and the University of Illinois at Urbana-Champaign looked at 18 healthy adult men who completed two increasingly difficult cognitive tests. The participants were tested after receiving either a cocoa drink high in flavanols, or a placebo drink of processed cocoa without flavanols.

The study found participants who drank the flavanol-rich cocoa performed significantly better on the cognitive tests, completing them 11% faster on average compared to when they drank the placebo.

The researchers also tested the blood oxygen levels of participants during the tests by having them breathe a higher concentration of carbon dioxide, a procedure that helps measure the blood flow response in the brain.

They found participants had better oxygen levels in their brains after consuming the flavanols. These findings suggest that flavanols could benefit cognitive ability by improving blood flow and increasing the amount of oxygen in the brain.

"Our results showed a clear benefit for the participants taking the flavanol-enriched drink – but only when the task became sufficiently complicated," Dr. Catarina Rendeiro, lead author of the study and nutrition lecturer at the University of Birmingham, said in a press release.  "We can link this with our results on improved blood oxygenation – if you're being challenged more, your brain needs improved blood oxygen levels to manage that challenge.

While this study is small, it is supported by existing evidence that flavanols have cognitive benefits.

A 2017 study found that flavanol-rich cocoa was linked to improved blood flow, including in the brain, which was found to benefit memory, processing speed, attention, and overall mental performance.

Cocoa in particular has been linked to lower risk of Alzheimer's disease and stroke, according to a 2013 study.

There's also evidence that flavanol-rich foods, including cocoa and tea, have benefits for blood flow through the body, including reducing blood pressure as effectively as specialized diets.

Plant foods like cocoa and tea are rich in many types of antioxidants, including flavanols, so more research is needed to better understand which compounds are specifically linked to which benefits.

This latest study was also limited in that it tested flavanols on healthy young men. Future research will need to test the effects of these nutrients on different populations, including women, elderly people, and those with existing illnesses, to see if the benefits are consistent.

It's not just cocoa — tea, red wine, berries, and apples are also rich in flavanols

Cocoa is only one example of a flavanol-rich food. The nutrients are also found in a variety of other plants, including tea, apples, berries, and vegetables like kale, onions, and hot peppers.

You can also get a flavanol boost from grapes or from drinking red wine, previous studies have found.

The findings of this study, then, suggest that people could see the cognitive benefits of flavanols by consuming all of the above, from sipping tea to snacking on blueberries.

"We used cocoa in our experiment, but flavanols are extremely common in a wide range of fruit and vegetable," Rendeiro said. "By better understanding the cognitive benefits of eating these food groups, as well as the wider cardiovascular benefits, we can offer improved guidance to people about how to make the most of their dietary choices."

Tea, berries, and apples contain a micronutrient that could lower blood pressure as much as the DASH diet

Eating high-protein meals could help you burn fat more efficiently, according to a new study