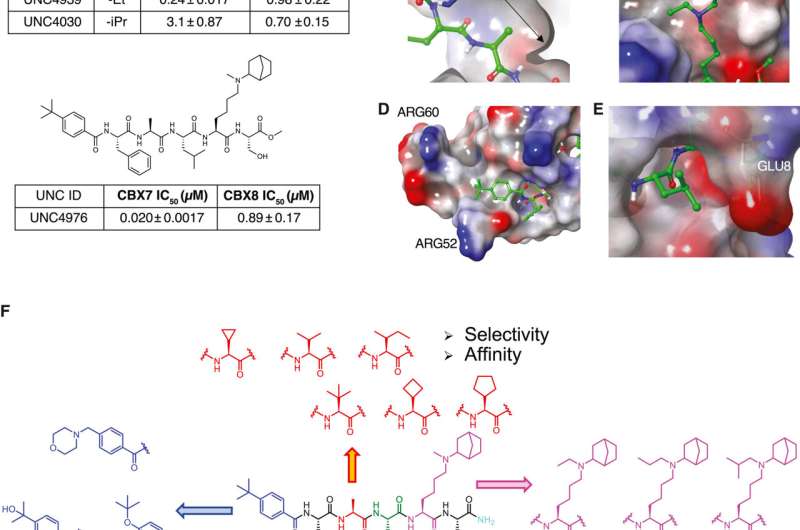 A decade ago, genome sequencing revealed a big surprise: about 50 percent of human cancers are linked to mutations in what are known as epigenetic regulators, which control the activity of genes.

In a new study in Cell Chemical Biology, a team of scientists led by Oliver Bell from USC and Stephen V. Frye from the University of North Carolina at Chapel Hill developed a new drug-like molecule that can counteract the effects of mutated epigenetic regulators, which are known to drive certain types of cancer including lymphoma.

In healthy cells, epigenetic regulators play an essential role: turning on and off the activity of hundreds of genes in the precisely orchestrated sequence that directs normal human development.

One of these epigenetic regulators, EZH2, controls the transient inactivation of specific genes in order to permit the maturation of immune cells. However, mutated EZH2 may cause persistent repression of these genes, thus preventing the immune cells from developing normally and ultimately leading them to transform into cancerous malignancies.

The good news is that in contrast to many other types of mutations, cancer-causing mutations in epigenetic regulators are potentially reversible by therapeutic drugs. With this in mind, first author Junghyun L. Suh and the research team set out to design a drug-like molecule to reverse the cancer-causing gene repression by EZH2.

Suh and her colleagues started by considering the mechanism by which EZH2 controls gene repression. EZH2 acts as a “writer” that marks which genes will be repressed. A second epigenetic regulator called CBX8 serves as a “reader” that interprets these repressive marks, and recruits additional regulatory machinery that actually turns off the genes.

Compared to the writer, the reader CBX8 seems to be equally critical for the proliferation of cancer cells, but is more dispensable for the function of healthy cells. This means that drugs targeting the reader would be expected to have fewer toxic side effects on the healthy cells throughout a patient’s body.

To specifically target CBX8, the researchers first engineered mouse stem cells in which they could easily screen a large number of drug-like molecules. These engineered stem cells relied on CBX8 reading the marks deposited by EZH2 to repress a gene producing a visible green fluorescent protein (GFP). If the stem cells showed activation of the telltale green glow, the scientists knew that a drug-like molecule had successfully prevented CBX8 from reading the repressive marks.

The researchers then parlayed their knowledge of CBX8 into several iterations of drug-like molecules that targeted this particular reader. They took into account CBX’s intricate protein structure, as well as the way that it binds to DNA and reads repressive marks. When they had succeeded in synthesizing a potent molecule that worked well in the engineered mouse cells, they moved on to testing in human cancer cells.

“When we exposed human lymphoma and colorectal cancer cells to our newly synthesized drug-like molecule in the laboratory, the malignant cells ceased to proliferate and began to behave more like healthy cells,” said the study’s co-corresponding author Oliver Bell, who is an assistant professor of biochemistry and molecular medicine, and stem cell biology and regenerative medicine at the Keck School of Medicine of USC, and a member of the USC Norris Comprehensive Cancer Center.