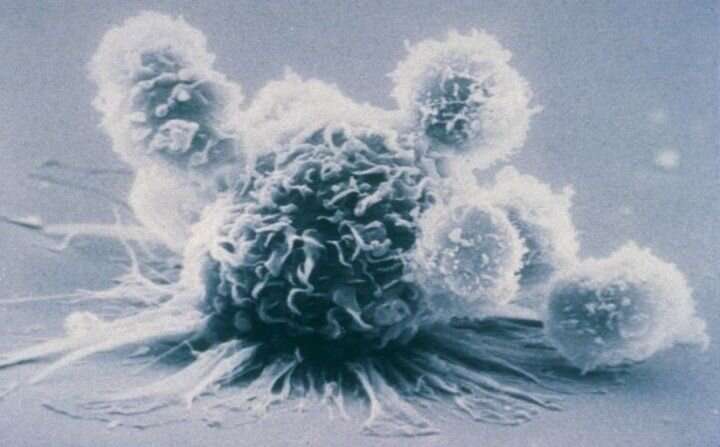 A new drug has been found to slow or temporarily stall the progression of ALS (amyotrophic lateral sclerosis) in a select group of patients. The drug, a proprietary form of purified chlorite that inhibits production of pro-inflammatory cytokines, may provide a treatment option in patients aged 40 to 65 with higher levels of inflammation, according to a new study.

The study is the latest milestone in an odyssey of twists and turns for researchers and patients who have a post-diagnosis life expectancy of between two to five years. It follows a previous phase 2A study that showed no significant slowing of decline between the participants who took the drug, known as NP001, compared with those on placebo. But researchers identified a subset of patients—those on the higher dose of the drug whose blood tests showed elevated levels of an inflammatory marker—who seemed to fare surprisingly well.

In the current phase 2B study, publishing in the journal Muscle & Nerve on Jan. 31, researchers used new data together with data from 2A, restricted to participants with elevated levels of the inflammatory marker who were on the higher drug dose, but the results were again disheartening. It was not until a post-hoc analysis, published in the same paper, which narrowed the field of 154 participants, aged 32 to 76, to 117 participants, aged 40 to 65, that a more promising picture emerged.

Age is a factor in success of new treatment

Researchers, led by senior author Michael S. McGrath, MD, Ph.D., Emeritus Professor of Medicine at UC San Francisco, found that those who had received NP001 had a 36 percent slowing of decline compared to the placebo group, according to their ALSFRS-R score, a questionnaire that ranks physical changes over time. Similarly, the NP001 recipients experienced a 51 percent slowing of decline in vital capacity, or respiratory function—a second test determining ALS progression—compared to the placebo group. These effects persisted months after treatment concluded.

“It is plausible that the disease mechanism and trajectory for those patients under 40 differs from older patients and is more likely to have a genetic or heritable component as is often seen in other chronic diseases, although this has not yet been proven,” said McGrath who is also a cofounder of Neuvivo, Inc., a pharmaceutical company and the study’s sponsor.

“People over 65 have a higher level of the plasma inflammatory marker C-reactive protein, the inflammation marker we tracked in our study, so this may have allowed for an overrepresentation of older ALS patients,” he said. “These higher levels may be attributed to other conditions unrelated to ALS, like diabetes and cardiovascular disease, making interpretation of ALS-specific variables difficult and potentially confounding.”

The development of NP001 is based on the premise that chronic inflammation is a key factor in the loss of motor neurons, the hallmark of ALS. According to the researchers, ALS starts with the activation of macrophages, a type of immune cell. NP001 reverts these macrophages back to an inactive anti-inflammatory state, thus slowing or stopping the disease.

In the study, participants with a probable or definite ALS diagnosis were recruited at 21 sites in the United States and Canada. They had experienced an onset of ALS-related weakness within the last three years and had a life expectancy of at least six months. Minimal side effects were reported; the main one being burning sensation at the site of infusion.

Currently, two drugs have been approved to slow the progression of ALS: riluzole (Rilutek), shown to increase life expectancy by three months, and edaravone (Radicava), shown to decrease decline of physical function by 33 percent at 24 weeks.

“My hope is that we can continue the study of patients whose disease progression slowed or halted with NP001 as compared to placebo,” said McGrath. “We’ve still got a lot to learn about ALS pathogenesis and how best to treat, but I believe that we’ve found a path forward for use of an immunoregulatory approach to a large subset of patients with ALS.”