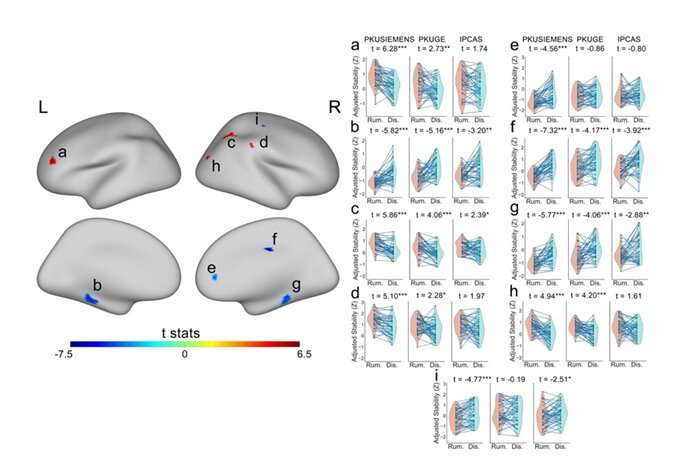 People tend to keep thinking about the distress itself and the possible causes and consequences when they encounter life distress. This psychological process is termed as “rumination” in literature. It is a common symptom and an important risk factor for major depressive disorder, but its neural mechanisms are still not clear.

Recently, a research team led by Prof. Yan Chaogan from the Institute of Psychology of the Chinese Academy of Sciences found that, the stability features of two large-scale brain networks were altered when participants were engaging active rumination.

In this study, the researchers induced participants into a continuous rumination state in a magnetic resonance imaging scanner and recorded the blood oxygen level-dependent signal during this state.

Then they characterized the temporal dynamics of the signal using a metric based on the sliding window strategy. This metric measures the overall similarity of functional connectivity architecture across all sliding windows.

These results indicated that the default mode network shows highly dynamic functional couplings with other brain regions to generate rumination while frontoparietal control network remain stable to exert over-constraint on the activity of default mode network.