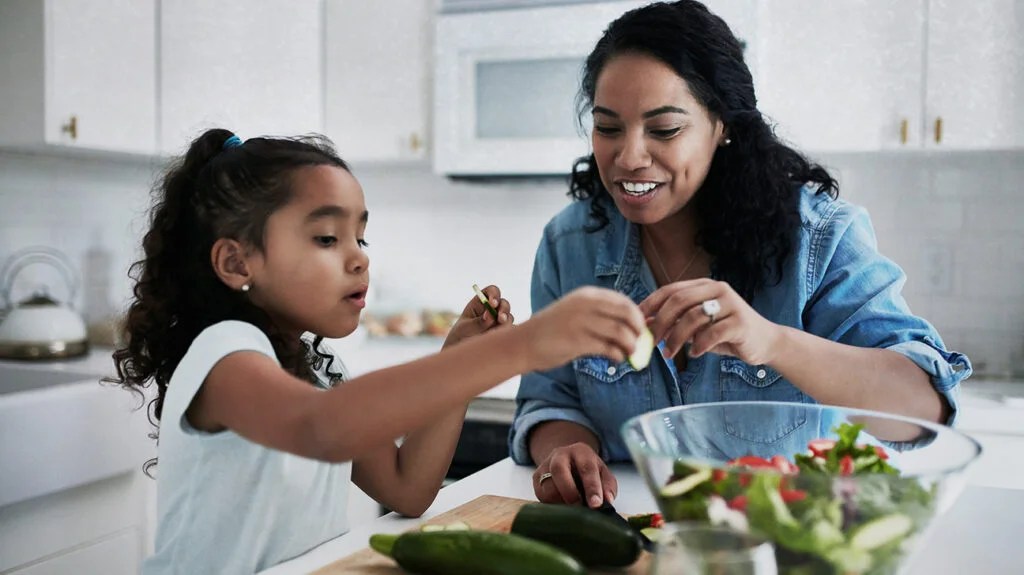 Although well-being among adults and children is similar, it is not exactly the same for both groups. Children are still growing, and multiple factors need to be taken into account when evaluating children’s health.

One area of interest is the association between nutrition and children’s mental well-being. A new study, which appears in the journal BMJ Nutrition, Prevention & Health, suggests that children who eat more fruits and vegetables are more likely to have a better sense of mental well-being than those who eat less.

The mental well-being of children

The provide the following definition of what it means for children to be mentally healthy:

“Being mentally healthy during childhood means reaching developmental and emotional milestones and learning healthy social skills and how to cope when there are problems. Mentally healthy children have a positive quality of life and can function well at home, in school, and in their communities.”

“Mental well-being in children plays a vital role in more than their health outcomes. Positive mental well-being is influenced by a variety of factors, and, in turn, impacts a range of outcomes, from education to health [and from] friendships to decision making.”

Chambers continues, “It also provides the platform to develop resilience, cope with stressors, and become rounded and healthy adults. It is also pivotal in their ability to be safe and for healthy relationships.”

“In an increasingly dynamic and uncertain world, mental well-being provides the foundations for children to build upon, to explore and learn, to play and have fun, and to navigate the challenges and adversity that come with being human.”

Research is ongoing when it comes to understanding the factors that influence mental health and well-being. The relationship between nutrition and mental health is an area of great interest — particularly regarding how nutrition is linked to the mental well-being of children.

The authors of the recent study note that:

“Nutrition, a modifiable factor at both an individual and societal level, is an important influence on health throughout the life course, is intricately involved in [the] development and normal functioning of the body, and thus has the potential to affect both physical health and mental well-being.”

The recent study was a cross-sectional study that examined the association between children’s consumption of fruits and vegetables, their meal choices, and their mental well-being.

These data came from The Norfolk Children and Young People’s Health and Wellbeing Survey 2017. A total of 10,853 children filled out this survey.

Both of these assessments use a system wherein a higher score indicates a higher level of well-being.

The survey also asked about the children’s intake of fruits and vegetables and the types of breakfasts and lunches they ate.

The scientists also collected data on other covariates, such as:

Some of these covariates, such as alcohol use, were not included in the survey for primary school children because the researchers deemed them inappropriate.

The study found that higher levels of fruit and vegetable consumption were associated with higher mental well-being scores among secondary school children.

It also found that, in secondary school children, only consuming an energy drink instead of breakfast was associated with lower mental well-being scores than not eating breakfast at all.

For both primary and secondary school children, the scientists found that mental well-being scores were higher for those who had breakfast or lunch than for children who did not eat these meals.

“These statistics are concerning, as poor nutrition is likely to impact on academic performance at school as well as growth and development,” Prof. Welch added.

The researchers note a few limitations to their study. Firstly, because the children only took the questionnaires once, the scientists could not track changes in well-being and diet over time.

Secondly, the data collection relied on self-reporting from children, which has the potential to be inaccurate. They also note that some of the questions related to the children’s diets were simplistic.

Based on previous research and the study’s results, the study authors advocate for schools to work to ensure that that nutritious food is available to all children.

Prof. Welch emphasized to MNT that:

“Good quality nutrition needs to be available to all children of school age to optimize mental well-being and empower children to fulfill their full potential. The associations found between nutrition and mental well-being in our study mean that strategies to improve nutrition in school children need to be investigated and implemented.”

Prof. Welch also noted that we need to understand the reasons that some students are not consuming meals. She told MNT:

“Further investigations are required to uncover the reasons why some children are not having breakfast, and/or lunch, or are consuming energy drinks only. These may include social, cultural, knowledge, and economic factors, including provision and access to [fruits] and vegetables being limited in areas of deprivation.”