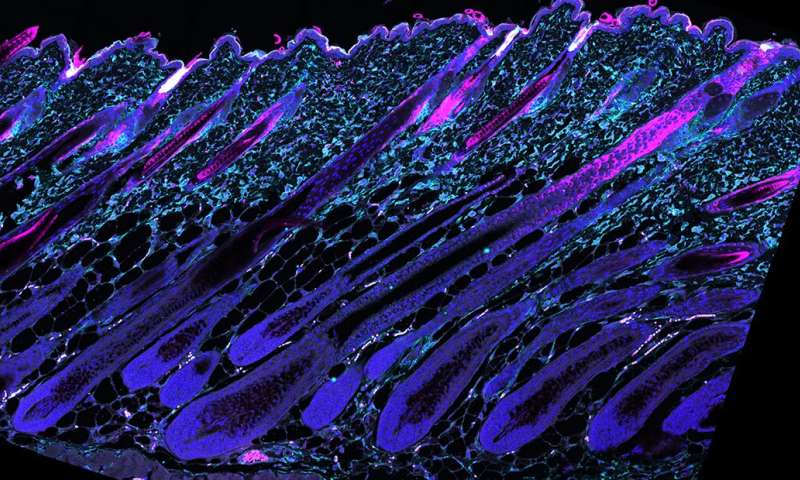 A team of researchers from Cologne and Helsinki has discovered a mechanism that prevents hair loss: hair follicle stem cells, essential for hair to regrow, can prolong their life by switching their metabolic state in response to low oxygen concentration in the tissue. The team was led by Associate Professor Sara Wickström (University of Helsinki and Max Planck Institute for the Biology of Ageing) and the dermatologist Professor Sabine Eming (University of Cologne), and included researchers from the University of Cologne’s Cluster of Excellence in Aging Research CECAD, the Max Planck Institute for the Biology of Ageing, Collaborative Research Centre 829 “Molecular Mechanisms Regulating Skin Homeostasis,” the Center for Molecular Medicine (CMMC) (all in Cologne), and the University of Helsinki. The paper “Glutamine Metabolism Controls Stem Cell Fate Reversibility and Long-Term Maintenance in the Hair Follicle’ has been published in Cell Metabolism.

Every day, tissues such as the skin and its hair follicles are exposed to environmental damage like ultraviolet radiation. Damaged material is continuously removed and renewed. On average, 500 million cells and 100 hairs are shed every day, amounting to 1.5 gram of material. The dead material is replaced by stem cells, which are specialized, highly proliferative and long-lived. Tissue function relies on the activity and health of these stem cells; compromised function or reduced number leads to aging. “Although the critical role of stem cells in aging is established, little is known about the mechanisms that regulate the long-term maintenance of these important cells. The hair follicle with its well understood functions and clearly identifiable stem cells was a perfect model system to study this important question,” said Sara Wickström.

To understand what made stem cells functionally distinct from their differentiated daughter cells, the team investigated the transcriptional and metabolic profiles of the two cell populations. “Intriguingly, these studies showed that stem cells and daughter cells have distinct metabolic characteristics,” said Dr. Christine Kim, co-leading scientist of the study. “Our analyses further predicted that Rictor, an important but relatively poorly understood molecular component of the metabolic master regulator mTOR pathway, would be involved.” The mTOR signal transduction regulates processes like growth, energy, and oxygen consumption of cells.

In more detailed analyses, the team showed that stem cell depletion was due to the loss of metabolic flexibility. At the end of each regenerative cycle, during which a new hair is made, the stem cells will return to their specific location and resume a quiescent state. Dr. Xiaolei Ding, the other co-leading scientist, explained, “The key finding of this study is that this so called “fate reversibility” requires a shift from glutamine metabolism and cellular respiration to glycolysis. The stem cells reside in an environment with low oxygen availability and thus use glucose rather than glutamine as a carbon source for energy and protein synthesis. This shift is triggered by the low oxygen concentration and Rictor signaling. The removal of Rictor impaired the ability of this stem cell fate reversal, triggering slow, age-dependent exhaustion of the stem cells and age-induced hair loss.” Ding and Eming had recently generated a genetic mouse model to study Rictor function and observed that mice lacking Rictor had significantly delayed hair follicle regeneration and cycling, which indicated impaired stem cell regulation. “Interestingly, with aging these mice showed hair loss and reduction in stem cell numbers,” said Ding.