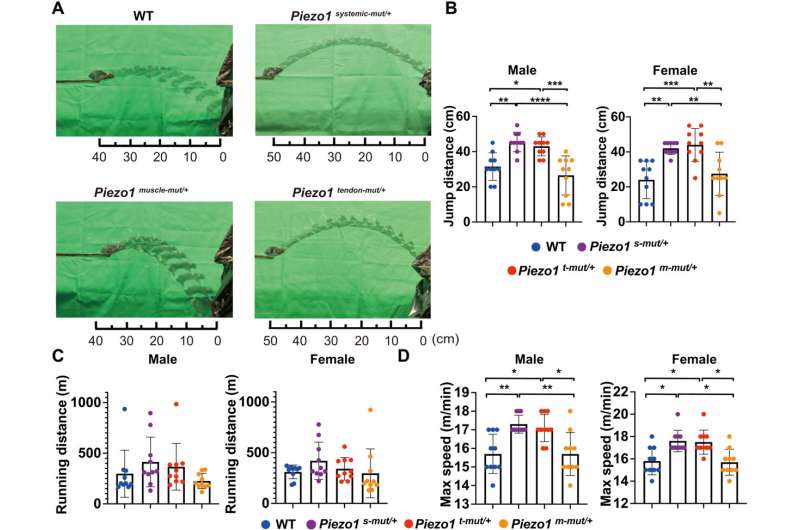 When you applaud the strength and speed of an animal or athlete, you probably don’t praise their tendons (the cords of connective tissue that attach muscles to bones)—but maybe you should. Scientists at Scripps Research have discovered a genetic mutation that gives tendons the ability to store more energy, letting mice jump higher and reach faster speeds than usual, as the team reported June 1, 2022, in Science Translational Medicine. Preliminary data on humans suggests that the gene variant, which is in a sensor protein known as PIEZO1, might play a similar role in people.

“Based on our data, PIEZO1 plays a key role in the properties of tendons,” says senior author Hiroshi Asahara, MD, Ph.D., professor of Molecular Medicine at Scripps Research. “It also has the potential to be a therapeutic target for treating age-related declines in physical performance.”

The PIEZO1 protein is a touch-sensitive ion channel; it sits on the membranes of cells and, when it detects pressure, opens to allow charge ions to flow through. It was first discovered in 2010 by Scripps Research professor Ardem Patapoutian, Ph.D., who won the 2021 Nobel Prize in Physiology or Medicine in part for the finding and for showing how the related protein PIEZO2 enables our senses of touch and proprioception.

“This new role of PIEZO1 in tendon biology, identified in mice, underscores just how important this group of ion channels is,” says Patapoutian, who is also a Howard Hughes Medical Investigator and who collaborated with Asahara on the new work. “We’re discovering more possible new roles of PIEZOs in health and disease as we keep studying them.”

In the years since Patapoutian discovered PIEZO1, the protein has been shown to play a role in the development of blood vessels, heart, bone and immune cells. Last year, Patapoutian’s group found that a variant of the PIEZO1 gene, carried by up to a third of people of African descent, helps protect against malaria but may predispose people to high levels of iron in their blood.

Recently, another group of researchers found that PIEZO1 regulates MKX, a gene that Asahara discovered and was already studying for its importance in tendon development. Asahara wondered how the PIEZO1 gene variant probed by Patapoutian’s group might impact tendons.

The researchers studied mice with a genetic change to PIEZO1 that led to the same effect as that seen in humans: the PIEZO1 ion channel closes more slowly every time it is activated. Some mice had the genetic alteration in all the cells in their body, some only in muscle cells, and some only in tendon cells. Mice with the genetic change in all their cells, or in tendons alone, could jump about one and a half times further than other mice. When the researchers tested how far the mice could run, they found no difference in endurance, but observed that the mice with the PIEZO1 mutation in either all their cells or their tendons could reach higher top speeds.

“All these results suggested that this PIEZO1 mutation is enhancing tendon tissue in a way that really impacts physical ability,” says first author of the paper Ryo Nakamichi, MD, Ph.D., a former member of the Asahara lab who is now working as an orthopedic surgeon at Okayama University in Japan.

When the team repeated the experiments with mice that had normal PIEZO1 activity during embryonic development but the PIEZO1 mutation after birth, they observed the same results—suggesting that the impact of the mutation is not only on the initial development of tendons.

To learn how the PIEZO1 variation might be giving mice the ability to jump higher and run faster, the researchers took a closer look at the animals’ muscles and tendons. Overall, they found high levels of the PIEZO1 gene in tendon cells and low levels in muscle cells, suggesting that the gene was not important to muscle function. In tendons, the ion channel was responsible for letting calcium flow in and out of cells, they showed. This altered flow of calcium changed the levels of a number of other genes—including MKX—that are involved in the generation and structure of tendon cells.

When Nakamichi, Asahara and colleagues measured the Achille’s tendons of the mice, they discovered that mice with the PIEZO1 mutation had tendons that were about 1.2 times wider, as well as wider fibrils composing each tendon. Further analysis showed that the tendons from mice with the PIEZO1 mutation were more compliant—the opposite of stiff—and could store about three times more energy than tendons from other mice, explaining their improved ability to jump and sprint. There were no differences in the muscles or nerves of the animals.

“These data suggested that what we observed in mice might hold true in humans but more work is needed to understand the full role of PIEZO1 in human tendons,” says Asahara.