In diploid organisms, two copies of a gene are inherited − one from the mother and one from the father. For most genes, both alleles are expressed, but in a small subset, only one of the copies are expressed whilst the other is inactive. This is termed genomic imprinting. 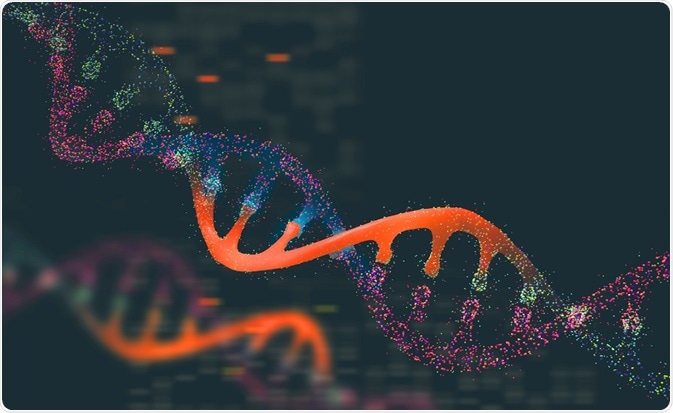 Genomic imprinting means that specific genes inherited from the mother or father are active, whilst the gene inherited from the other parent is inactive. This preferential expression of one allele is important for normal development. Genomic imprinting is found in all mammals and investigation of this process has been aided by the presence of many conserved imprinted genes between mice and humans.

This indicated that imprinted genes with preferential expression of one inherited allele (either paternal or maternal), were central to normal development. The paternally expressed IGF2 gene was one of the first imprinted genes to be identified as a positive regulator of fetal growth. Interestingly, it’s expression is controlled by the maternally imprinted IGF2R gene.

Imprinted genes also have an important role in neural development and function. Genomic imprinting provides unique gene expression in the brain that is separate from patterns seen in other tissues. One example is the UBE3A gene where both copies are expressed in most tissues but only the maternal copy is expressed in brain tissue where it promotes neural plasticity. Some imprinted genes are associated with specific neuronal subtypes that assist in the establishing diverse cell types within the brain tissue.

Genomic imprinting occurs through the marking of a gene during gamete production via different epigenetic mechanisms. Two major mechanisms by which genes are imprinted are DNA methylation and histone modifications. During DNA methylation, a methyl group is added to a segment of DNA and is employed in the identification of a maternal or paternal allele.

The epigenetic process alters gene expression through imprinting without altering the DNA sequence. Histone modifications alter the chromatin structure leading to changes in gene expression. There are numerous modifications that can be applied to the histone for imprinting including histone acetylation, which forms an accessible chromatin formation, and histone deacetylation leading to compressed chromatin.

After fertilization, specific imprints from each parent must be maintained during genome reprogramming. The final stage of genomic imprinting involves the erasure of the somatic pattern of biparental imprints.

Some diseases occur as a result of deletions or mutations in imprinted genes. Prader-Willi syndrome and Angelman syndrome were the first reported diseases associated with genomic imprinting in humans. The diseases have distinct symptoms though they are both caused by a deletion in the same region of chromosome 15. This is because the parental origin of the affected chromosome differs between the two syndromes.

In normal embryonic kidney cells, the imprinted maternal copy of H19 is expressed that has a growth suppression function along with the imprinted paternal copy of IGF2, a known growth factor. In Wilm’s tumor cells the imprinting of H19 and IGF2 is lost, meaning that the lack of H19 function causes an overexpression of IGF2 resulting in tumorigenesis.