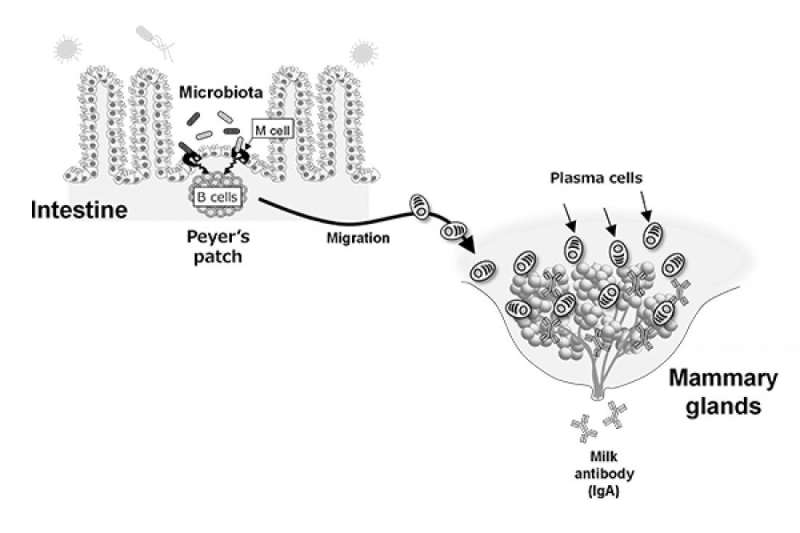 A research group has discovered an interorgan network between the mammary glands and the small intestine that plays an essential role in transferring antibodies via breastfeeding.

Breastfeeding offers an array of benefits for mothers and newborns. Maternal antibodies are transferred via breastfeeding, protecting the gastrointestinal tracts of babies from several pathogen-caused infections. Yet the molecular mechanism by which maternal antibodies, especially immunoglobulin A (IgA), are produced in mothers during lactation still puzzles scientists.

Now, a research group led by Tomonori Nochi from Tohoku University’s Graduate School of Agricultural Science has discovered that an interorgan network between the mammary glands and the small intestine plays an essential role in maternal antibody transfer through breastfeeding.

Details of their research were published in the journal Cell Reports on September 7, 2021.

Nochi states the research was linked to a need to develop an immune strategy that enhances the quality and quantity of maternal IgA in milk. “We still lack a complete picture when it comes to antibody production in lactating mothers, and this has hindered the discovery of immunological and microbiological approaches to increasing breastfeeding quality.”

In the past, scientists have struggled fully comprehend antibody production in lactating mothers. This has hindered the discovery of immunological and microbiological approaches to increasing breastfeeding quality.”