Hospitals in Houston reportedly say they could run out of the antibody treatment sotrovimab within the next two weeks.

Sotrovimab has been proven effective against the omicron variant of the coronavirus.

The University of Texas Medical Branch (UTMB) told Fox News on Saturday that its four-hospital network is “using sotrovimab with the patients who need it most and are waiting on the next shipment.”

In a Dec. 27 news release, the DSHS said that the federal government controls the distribution of monoclonal antibodies and that regional infusion centers in Austin, El Paso, Fort Worth, San Antonio and The Woodlands have exhausted their supplies of sotrovimab “due to the national shortage.”

“They will not be able to offer it until federal authorities ship additional courses of sotrovimab to Texas in January. People who had appointments scheduled this week will be contacted directly and advised. Other monoclonal antibodies have not shown to be effective against the omicron variant, which now accounts for more than 90% of new cases. The infusion centers will continue to offer those antibodies as prescribed by health care providers for people diagnosed with a non-omicron case of COVID-19,” the department wrote, noting that two new oral antiviral drugs authorized last week by the U.S. Food and Administration (FDA) will be available soon, with an expected limited initial supply. 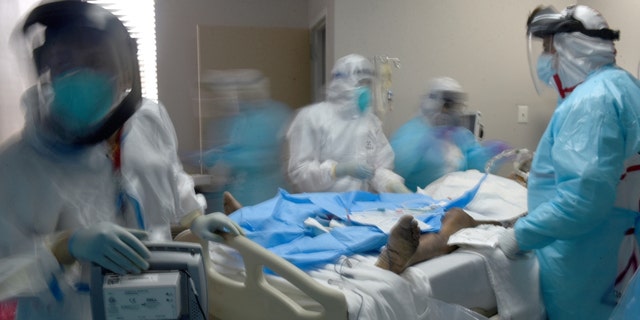 The federal government will also control their distribution.

A spokesperson at the DSHS told the Chronicle the state health agency would learn more about future monoclonal antibody allocations on Monday.

The U.S. Department of Health and Human Services (HHS) said in a statement that supply of the drug is “extremely limited, and additional doses of the product will not be available until the week of January 3rd.”

Monoclonal antibodies are critical tools for hospitals – though not a substitute for vaccination – and are intended for people who are at high-risk or symptomatic.

Texas identified its first case of omicron on Dec. 6, and Harris County Judge Lina Hidalgo said last month that a Houston man is believed to have been the first American to die from the strain.

“The omicron variant of the COVID is extremely contagious,” Dr. David Persse told Fox 26. “We’re seeing the numbers go up rather dramatically.”