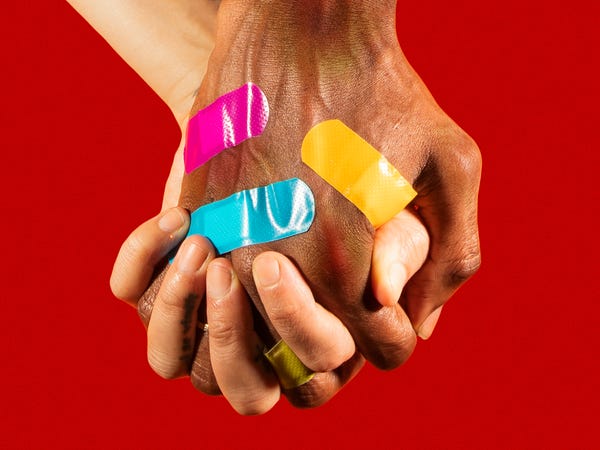 After leaving NXIVM, an alleged sex cult covered up as a multi-level marketing company that sold self-help courses, Sarah Edmondson felt unsure about what was next.

She dedicated 12 years of her life to NXIVM, and even met her husband, Anthony "Nippy" Ames, there in 2006. The cult's leader Keith Raniere married Edmondson and Ames in 2007, and wrote vows for their ceremony that they recited.

But after Edmondson was forcibly branded with Raniere's initials and she revealed the traumatic event to her husband, they realized they'd been brainwashed, and decided to leave for good in 2017.

Then comes recovery. For an individual, that looks like regaining trust, rehashing trauma, and building self-confidence. But for a couple who went through the same brainwashing together, the healing process is even more complex.

Three years later since leaving NXIVM, Edmondson and Ames told The Cut reporter Anna Silman they had to rebuild their relationship from the ground up, since toxic NXIVM practices influenced so much of it.

According to Ames, it's the love they share that allowed them to leave NXIVM, become whistleblowers, and move forward in a new chapter of their lives.

"Ultimately, I married her character, and when it was tested, it proved to be what I thought it was," Ames told Silman, adding that "love was the thing that brought this entire organization down. And anyone who didn't have that in their lives wasn't really going to survive this."

Though the foundation of love has always been there, Edmondson said she and Ames have had to reckon with unhealthy habits Raniere and his teachings drove into their subconscious.

"The first thing was learning to just listen and have empathy and not coach each other," Edmondson told Silman, which was difficult because Raniere taught followers that there's no such thing as a victim, and empathy is a weakness.

She said practicing empathy for each other is an ongoing process, and there have been slip-ups.

Edmondson recalled a recent three-day panic attack she had after taking an over-the-counter-sleep aid. During that time, she wanted Ames to soothe her and tell her it'd be OK, but instead he became distant.

When Edmondson asked her husband why that was, he said he thought she was being too "indulgent." That word triggered Edmondson.

"And that was a Keith word. Keith would say that women 'indulge' their emotions to get attention. In making distinctions between men and women, Keith made women feel bad about their emotions and, you know, invoked the whole 'women are crazy' concept," Edmondson said.

After discussing the situation, Ames took responsibility for being cold and distant when she needed support, but the experience was a lesson in how deeply NXIVM teachings were ingrained in both of them, said Edmondson.

Moving forward, Edmondson said she and her husband will build "a new type of intimacy and a new type of communication based on empathy and humaneness."

After leaving NXIVM, she realized she and Nippy weren't really tuned into each other's mental and emotional needs, since they were constantly busy with cult leaders' demands. The couple didn't even have a honeymoon because they were so wrapped up with the group, according to Edmondson.

Now, she wants to carve out quality time to get to know her husband and build an emotional awareness that's been lacking.

"We didn't have a strong relationship at that time. I don't blame him for that at all. But it was definitely a hurdle. Our focus now is — and must be — maintaining our strong connection, so we always know what's up with each other," Edmondson said.