Selective serotonin reuptake inhibitors (SSRIs) block the reuptake of serotonin by the serotonin transporter (SERT) protein, a type of monomine transporter. They are commonly used in the treatment of depression and anxiety. 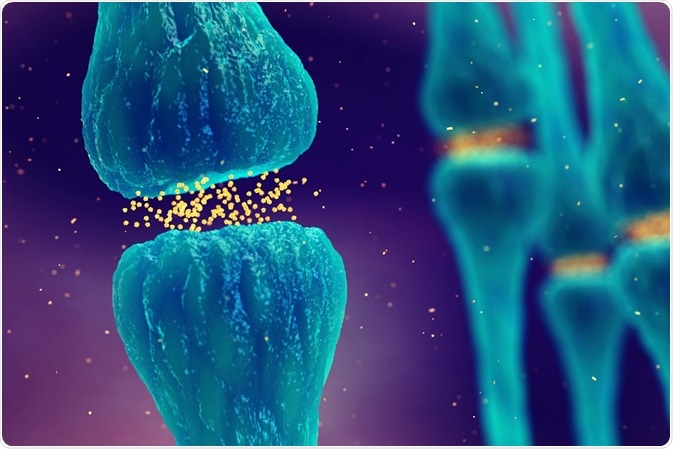 Their main purpose is to limit the transmission of the nerve impulse to one direction–from the body cells to the brain in response to a stimulus (along a sensory neuron), or from the brain to an effector cell (along a motor neuron) to activate a response.

When the presynaptic neuron is stimulated by a nerve impulse, certain channels are opened in the membrane of the nerve cell. This allows calcium ions to flow in and signal to vesicles containing neurotransmitters to empty their contents into the synaptic cleft.

One example of a neurotransmitter is serotonin, which contributes to feelings of happiness and enjoyment. When someone is suffering from depression, less serotonin is released by the presynaptic neuron, meaning that mood can radically be affected. Many different drugs, including neurotransmitter analogues act via this mechanism.

Monoamine transporters are a class of protein found in the cell membrane of neurons in the central and peripheral nervous system. They function as transporter protein of the neurotransmitters commonly used in synaptic transmission.

The different types of monoamine transporters bind their respective neurotransmitter and move them back into the presynaptic neuron.

Selective serotonin reuptake inhibitors (SSRIs) are commonly used as antidepressants to treat depressive and anxiety disorders. They inhibit reuptake of serotonin via the monoamine transporter SERT that bind to an allosteric site on SERT (a binding site on the protein which is not the main active site). This blocks the reuptake of serotonin into the presynaptic neuron.

The exact structure of this binding site is currently not known–when SSRIs bind to this site it causes any ligands that bind to SERT, such as serotonin, to dissociate.

SSRIs are second-generation antidepressants, meaning that they were first introduced in the 1970s and 80s, after the introduction of TCAs (tricyclic antidepressants). TCAs inhibit the action of both SERT and NET and are considered to be a first generation MAT inhibitor antidepressant.

SSRIs, such as fluoxetine, citalopram and paroxetine have fewer side effects than tricyclic antidepressants. For example, common TCA’s, such as imipramine and clomipramine can cause blurred vision, dry mouth, difficulty urinating, and drowsiness. The side effects of SSRIs include nausea or vomiting, a common side effect of many drugs.

SSRI’s are therefore a very useful inhibitor of monoamine transporters, and can greatly help with depression. They are widely distributed and are one of the most common antidepressants.