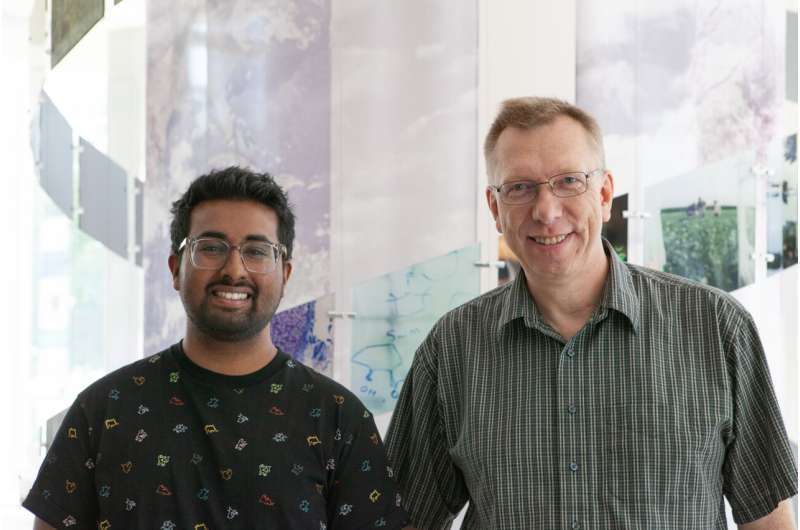 Although Enterococcus faecalis is usually an innocuous member of the bacterial community in the human gut, it can also cause several infections, including liver disorders. The bacteria produce cytolysins, which are molecules that destroy cells. In a new study, researchers have uncovered how they do so.

“Your chances of dying increase by 5-fold when you get infected by E. faecalis that can make cytolysin compared to those that cannot,” said Wilfred van der Donk (MMG), a professor of chemistry and investigator of the Howard Hughes Medical Institute. “Cytolysin is an important molecule and it has been known since the 1930s, our lab determined the cytolysin structure only in 2013.”

Concerningly, E. faecalis is resistant to vancomycin, which is used as a last resort to treat bacterial infections. By understanding how cytolysins affect cells, the researchers hope to prevent its production and reduce the number of lethal infections.

Cytolysin is made up of two subunits, CylLL” and CylLS”, which have been previously shown to kill both mammalian and bacterial cells. The structure of the subunits is stabilized with the help of rings, called macrocycles, that staple the ends and prevent the structure from unfolding. To understand how they work, the researchers replaced each amino acid in both these subunits to determine which amino acids are important.

“After mutating the amino acid residues, we purified and tested each of the mutants to see whether they had anti-bacterial activity or if they could lyse rabbit blood cells,” said Imran Rahman, a graduate student in the van der Donk lab and the first author of the paper. “We found that the macrocyclizations in both subunits are important for both activities.”

Additionally, the researchers discovered that CylLL” contains a hinge region which is also important. “The hinge contains three consecutive glycine residues and if we delete them, CylLL” becomes so unstable that we can no longer purify it,” Rahman said.

The residues help CylLL” switch between two different shapes: a jackknife and an elongated form that can span across the bacterial membrane. “When it’s longer, the subunit can make holes in the membrane and we think that’s why the glycine residues are required for its activity,” van der Donk said.

The researchers are interested in identifying the targets of cytolysin. “These molecules are unusual because unlike our current antibiotics, which bind to big cellular targets, these bind to small molecules and seem to use them to make holes in the membrane,” van der Donk said. “We don’t know what their targets are and we’re working to find them.”