To better cope with all the dispiriting news about rising COVID-19 cases and so much else, you might want to get out and move, according to a new report.

A large-scale study of almost 200,000 cross-country skiers found that being physically active halves the risk of developing clinical anxiety over time. The study, from Sweden, focused on skiing, but the researchers said almost any kind of aerobic activity likely helps protect us against excessive worry and dread, a cheering thought as we face yet another grim pandemic season. 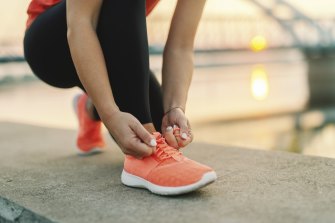 The study results indicate the link between exercise and reduced anxiety is strong.Credit:iStock

Science already offers plenty of encouraging evidence that exercise can lift our moods. Experiments show that when people (and lab animals) start working out, they typically grow calmer, more resilient, happier and less apt to feel unduly sad, nervous or angry than before. Public health research studies, which often focus on the links between one type of activity or behaviour and various aspects of health or longevity, likewise find that more exercise is linked with substantially lower chances of developing severe depression; conversely, being sedentary increases the risk for depression. A remarkable neurological study from 2013 even found that exercise leads to reductions in twitchy, rodent anxiety by prompting an increase in the production of specialised neurons that release a chemical that soothes overactivity in other parts of the brain.

But most of these studies were small, short-term or mainly relevant to mice, leaving open many questions about what kinds of exercise might help our mental health, how long mood enhancements might potentially last, whether men and women benefit equally and whether it is possible to work out too much and perhaps increase your likelihood of feeling emotionally worse off.

So for the new study, which was published in Frontiers in Psychiatry, exercise scientists at Lund University in Sweden and other institutions decided it would be worthwhile to look into the long-term mental health of the thousands upon thousands of men and women who have raced Sweden’s famous Vasaloppet cross-country skiing event over the years.

The Vasaloppet, which celebrates its centenary this winter, is the largest series of cross-country ski races in the world, with crowds of racers annually lining up in the woods of central Sweden to whoosh, glide and pant through races ranging in length from 30 kilometres to the showcase distance of 90 kilometres. Because this kind of endurance event requires abundant health, stamina and training, researchers previously have used data about Vasaloppet racers to study how exercise influences heart health, cancer risks and longevity.

“We use participation in a Vasaloppet as a proxy for a physically active and healthy lifestyle,” said Tomas Deierborg, director of the experimental medicine department at Lund University and senior author of the new study, who has twice completed the 90-kilometre race.

To start, he and his colleagues gathered finishing times and other information for 197,685 Swedish men and women who participated in one of the races between 1989 and 2010. They then cross-checked this information with data from a Swedish national registry of patients, looking for diagnoses of clinical anxiety disorder among the racers in the following 10-20 years. For comparison, they also checked anxiety diagnoses during the same time period for 197,684 of their randomly selected fellow citizens who had not participated in the race and were generally considered relatively inactive.

The skiers, the researchers found, proved to be considerably calmer over the decades after their race than the other Swedes, with more than 50 per cent less risk of developing clinical anxiety. These good spirits tended to prevail among male and female skiers of almost any age – except, interestingly, the fastest female racers. The top female finishers from each year tended to be more likely afterward to develop anxiety disorders than other racers, although their risk overall remained lower than for women of the same age in the control group.

These results indicate “the link between exercise and reduced anxiety is strong,” said Dr Lena Brundin, a lead investigator of neurodegenerative diseases at the Van Andel Research Institute in Grand Rapids, Michigan, who was another author on the study.

And helpfully, you probably do not need to cross-country ski for long distances in the snowy woods of Sweden to reap the rewards, Deierborg said. Earlier studies of exercise and mood suggest that following the World Health Organisation’s recommendations of about 30 minutes of brisk walking or similar activities most days “has good effects on your mental health,” he said, and these benefits appear to apply to a “broader population” than just Swedes.

The findings have limitations, though. They cannot prove exercise causes people to enjoy better moods, only that highly active people tend to be less anxious than their more sedentary peers. The study also does not explain how skiing might reduce anxiety levels. The researchers suspect physical activity changes levels of brain chemicals related to mood, such as dopamine and serotonin, and reduces inflammation throughout the body and brain, contributing physiologically to stouter mental health. Getting outside among silent, snow-drenched pines and far from Zoom calls while training for a Vasaloppet probably does not hurt, either.

Any exercise in any setting likely should help us cope better this winter, the researchers said. “A physically active lifestyle seems to have a strong effect on reducing the chances of developing an anxiety disorder,” said Deierborg, who hopes to extend those benefits to the next generation. He plans to enter and train for another Vasaloppet in a few years, he said, when his young children are old enough to join him.

This article originally appeared in The New York Times.