MADISON, Wis. — Tucked inside a residential neighborhood, and surrounded by a wooden fence and greenery, are nine little houses. With multicolored siding and roofs, they look like people-sized birdhouses. And they fit right in.

So does Gene Cox, 48. He hasn’t been homeless in more than seven years. That’s the point of this little development.

“This is the longest time I’ve stayed in one place,” said Cox, nursing coffee and a cigarette outside his tiny home after working second shift as a benefits administrator. “I’m very nomadic. I’ve moved around Wisconsin a lot over the last 22 years.”

After Cox got divorced in 2009, he bounced around rentals before living in his van for a year. He tried a local men’s shelter. He lasted only two nights.

Then in 2014, he heard about this community being planned by Occupy Madison, a spinoff of the national movement against income inequality. Cox started helping with gardening, one of his passions. A few months later, he moved into one of its 99-square-foot houses (echoing the “99%” of the population that Occupy aimed to represent).

With housing costs rising, tiny homes are spreading as a solution to homelessness in California, Indiana, Missouri, Oregon, and beyond. Arnold Schwarzenegger garnered considerable publicity in December when he donated money for 25 tiny houses for homeless veterans in Los Angeles. It reflects a growing interest in outside-the-box ideas to get unhoused people off the streets, especially during winter in cold climates and amid the covid-19 pandemic.

“Anything that increases the supply of affordable housing is a good thing,” said Nan Roman, CEO of the National Alliance to End Homelessness. “We have a huge shortage of housing — around 7 million fewer affordable housing units than there are households that need them.”

Housing and health are inextricably linked. In a 2019 study of 64,000 homeless people, individuals living on the streets were more likely to report chronic health conditions, trauma, substance misuse, and mental health issues than those who were temporarily sheltered.

But not all tiny homes are created equal. They range from cabins with a cot and a heater to miniature houses with kitchens and bathrooms.

The communities themselves differ, too. Some are just “agency-managed shelters that use pods instead of the traditional gymnasium full of bunk beds,” said Victory LaFara, a program specialist with Dignity Village, a tiny-home encampment since 2000, in Portland, Oregon. Some are self-governing, like Dignity Village and Occupy Madison, and a few offer a path to tiny home ownership.

Many are in remote parts of town, though — far from jobs, grocery stores, and social services. “There’s a balance between the benefits you get from the improved structure and the bad factors you could get from being in a worse location,” said Luis Quintero, a housing researcher at the Johns Hopkins Carey Business School.

Donald Whitehead Jr., executive director of the National Coalition for the Homeless, said he thinks tiny homes are a good emergency option, to protect people from the elements and violence, but are not long-term solutions, like increasing the number of living-wage jobs, the housing stock, and funding for housing vouchers.

“There’s been this theme since the ’70s that there are some people in society that are less deserving,” he said. “And the tiny home kind of fits within that mindset.”

Zoning regulations and building codes have prevented tiny homes from being built in some cities, as have concerned neighbors. That opposition often fades once the communities are up and running, according to village organizers. “Since we moved into Community First! Village six years ago, there have been no documented crimes from anyone on this property in any of the adjacent neighborhoods,” said Amber Fogarty, president of Mobile Loaves & Fishes, a homeless outreach group in Austin, Texas, that operates the nation’s largest tiny-home project. 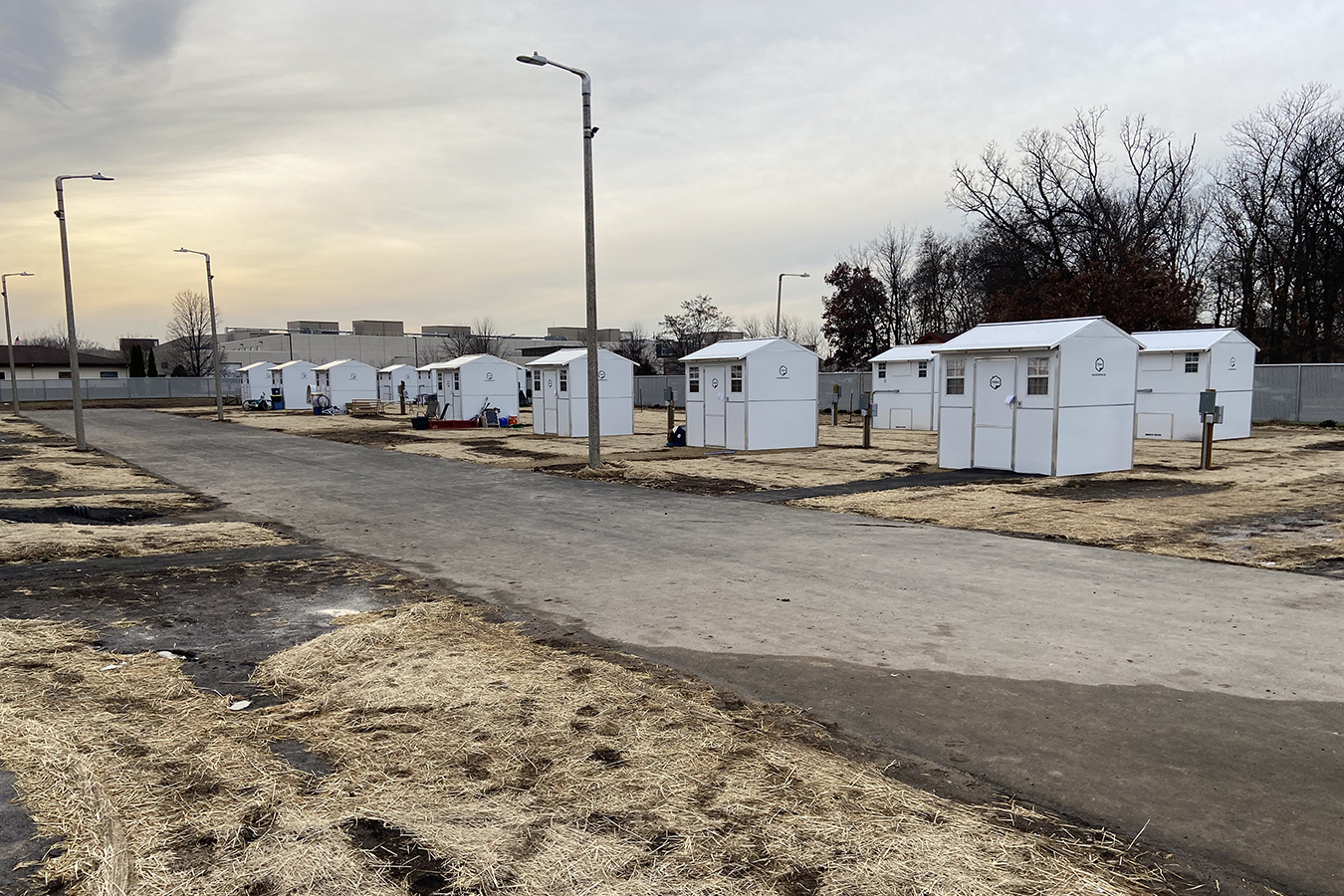 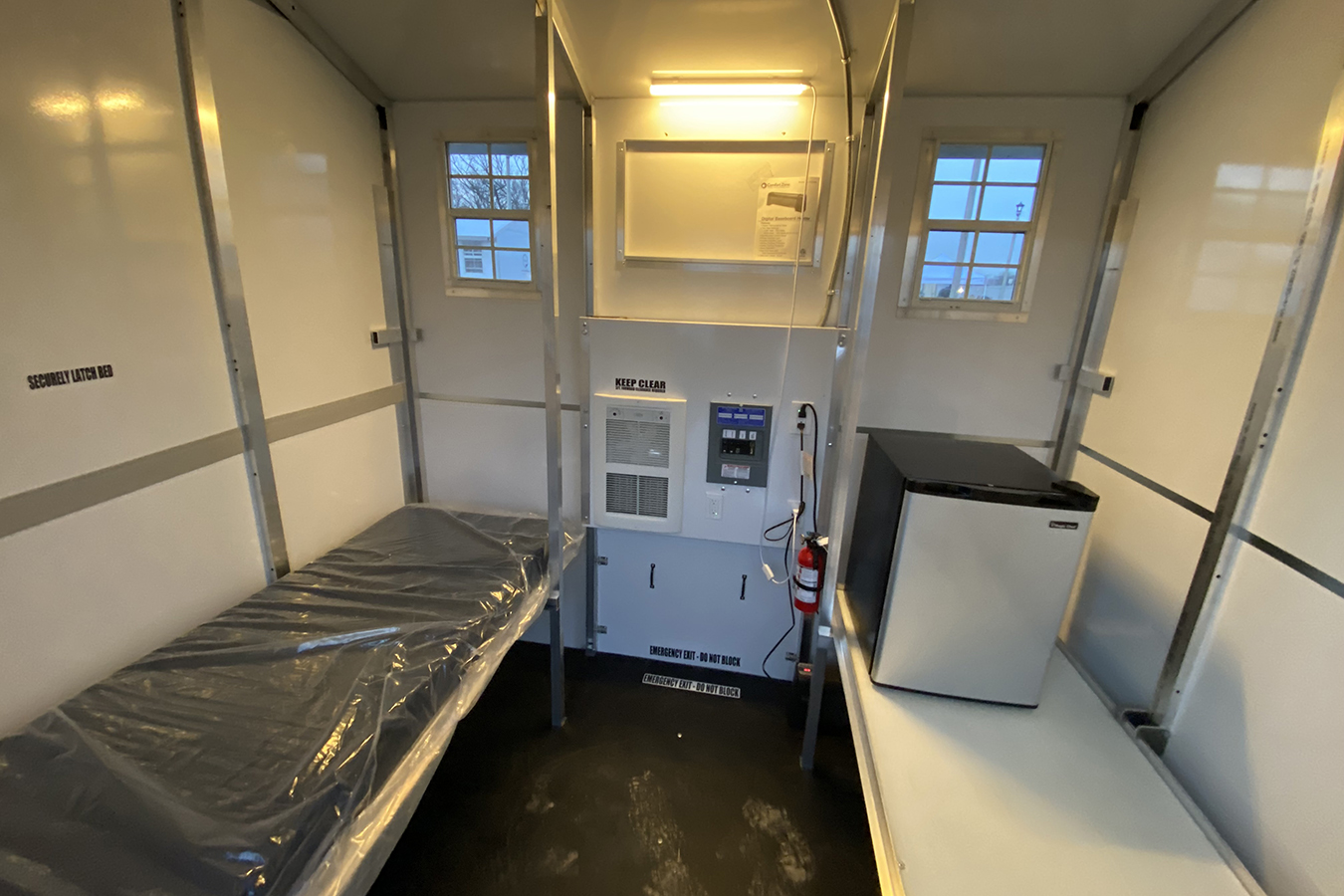 Madison, which has about 270,000 residents and is home to Wisconsin’s Capitol and flagship university, has three different types of tiny homes showcased in three locations.

Occupy Madison’s newest village opened in late 2020 about a mile north of its original site. Next to a shuttered bar, 26 Conestoga huts, resembling covered wagons from the old West, line a fenced parking lot. The 60-square-foot temporary structures will eventually be replaced by tiny houses, which occupants are expected to help build.

On the outskirts of town, in an industrial development near an interstate, the city’s new tiny-home project features parallel rows of 8-by-8-foot white prefabricated shelters that look like ice fishing shanties. Unlike the two Occupy settlements, this one has a full-time staff, including a social worker and an addiction counselor; on a recent day, residents streamed in and out of its cramped office, either to use the phone or grab a muffin or some cookies. People walked their dogs outside.

The 30 residents had previously been living in tents in Madison’s busy Reindahl Park.

“The city was solving a political problem, first and foremost,” said Brenda Konkel, president of Occupy Madison and executive director of Madison Area Care for the Homeless OneHealth. The so-called sheltered encampment cost about $1 million to set up and will run about $800,000 to $900,000 a year to operate. 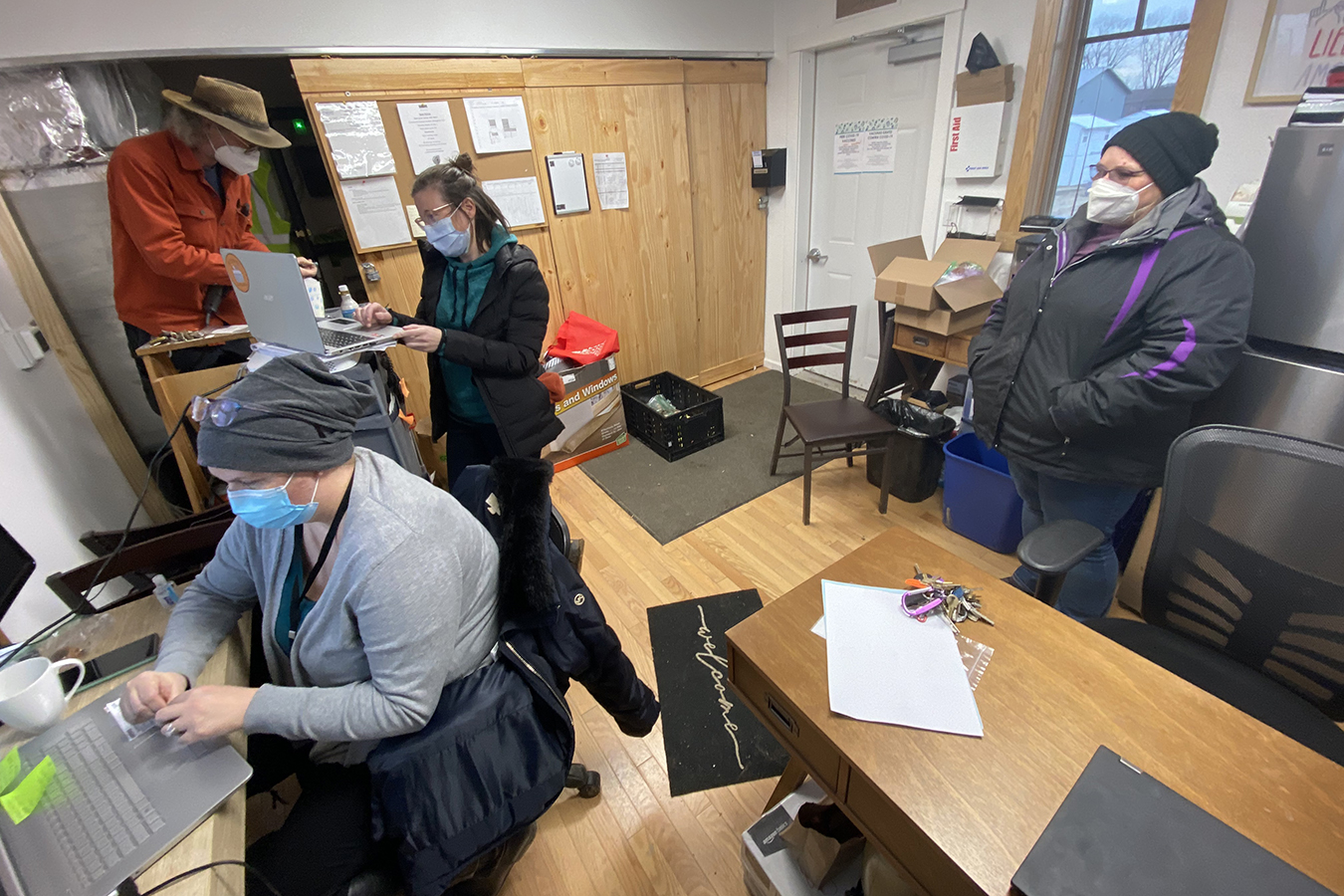 City Community Development Director Jim O’Keefe said housing people in a traditional shelter would be significantly cheaper in the short term. But tiny-home villages can often serve those who are either unwilling or unable to stay in a congregate setting, because they have pets or partners, have severe emotional or psychological issues, or are banned from the shelter system.

“Anybody that spent any time at Reindahl understood how unsafe and untenable it was for people who were staying there,” O’Keefe said.

Sara Allee-Jatta, clinical director of Kabba Recovery Services, said residents’ substance use had increased since they arrived at the city-run site, perhaps because they finally had warmth and didn’t have to worry about keeping their belongings safe. She hopes their newfound quietude will also give them the space to recover when they’re ready.

For Jay Gonstead, a lifelong Madisonian who moved into the camp after it opened in November, the place has been a godsend. After a divorce, he lived in the tent city for seven months.

“Toward the end, it got really bad. I never thought in my lifetime I’d have to shoot Narcan into somebody, but I did,” he said, referring to the treatment that reverses opioid overdoses. “I witnessed a man be shot. I witnessed stabbings. That was not a good place.”

The 54-year-old sets out on his bike regularly to look for work. “I have a criminal history. I’m an alcoholic,” he said. “It makes it tough.”

But he’s noticed smiles on his neighbors’ faces for the first time he can remember. Electricity and hot showers — along with a sense of community — tend to have that effect, he said.

“When you’ve got a roof and a door that locks, that’s home,” he said, fighting back tears. “We’re not homeless.”