Surging demand and supply issues have left many struggling to access medications that soothe the debilitating symptoms of the menopause.

Some have been forced to take time off work to scour the country for pharmacies stocking their prescriptions, while others have travelled abroad where it is available over the counter.

Desperate women have even resorted to meeting in car parks to swap medication, with concerns supply may not be sorted until June at the earliest.

Reena Barai, a pharmacist in Sutton, London, and member of the National Pharmacy Association, called on the Government to empower chemists to offer different drugs to what they have been prescribed.

Currently, patients need to get their GP’s permission to get alternative medications, which can take days.

Some women have been reluctant to take alternative medications because of their side effects. The crippling shortage is mainly caused by HRT gels, which are most popular.

No10 has stepped up its approach to the crisis by appointing one of the women responsible for securing Covid vaccines for the UK.

There were about 512,000 NHS prescriptions written for ‘female sex hormones and their modulators’ in England in February, the latest official data shows, compared to 265,000 in March 2017. Many of these will be HRT medications but some may include other female hormone drugs such as contraceptives

Madeleine McTernan has been appointed the new head of the Government’s HRT Taskforce.

Ms McTernan is a former investment banker, working as the managing director at Credit Suisse.

She holds a law degree from the University of Cambridge and worked for Lehman Brothers prior to her 10 years at Credit Suisse.

She joined UK Government Investments (UKGI) — a company owned by the Government that manages a portfolio of 17 businesses, including NatWest Group, Channel 4 and Urenco Group — in 2017.

Ministers appointed her director general of the Vaccines Taskforce in December 2020, where she was in charge of procuring jabs.

She was honoured by the Queen in December for her success in the role, being made a Companion of the Order of the Bath.

The Department for Health and Social Care said Ms McTernan will use her knowledge from supplying vaccines to help address the HRT shortage.

Madelaine McTernan has been put in charge of fixing supply issues and will spearhead efforts to deal with shortages of the medicine.

She was director general of the heavily praised Vaccine Taskforce, credited for the success of Britain’s Covid jab rollout.

Now, she will turn her hand to helping thousands of menopausal women struggling to get HRT, mostly due to problems with supplies of a popular oestrogen gel.

Ms Barai told BBC Radio 4’s Today programme: ‘We live in a first world country and it seems really embarrassing sometimes to say to a patient “I’m so sorry, I can’t get your medication”.

‘So anything the Government can do to help us to really resolve this situation will be great for our pharmacy teams because we spend several hours trying to source medication for patients.

‘And that’s time we could use in a better way to support patients with other services like blood pressure checks, flu jabs, Covid vaccines.’

Ms Barai also said it ‘absolutely makes sense’ that Ms McTernan has been appointed to lead a new HRT taskforce.

She added: ‘Somebody needs to get a grip on this situation and co-ordinate the response.

‘That would be a game changer for pharmacists and for our patients as well.

‘And also often we’re not able to share medicines with each other, with other pharmacies, and if we were able to do that as well we’d really save lots of precious GP time that’s wasted in issuing alternative prescriptions.’

Asked if the process could be speeded up, she said: ‘Absolutely.

‘It would be really useful for us to be able to do that and support our patients, because we undeservedly get the brunt of people’s frustration in these difficult circumstances.’ 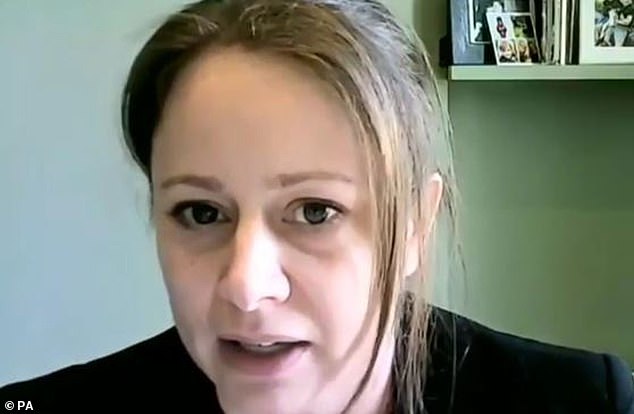 Madelaine McTernan (pictured) has been appointed the new HRT tsar and will spearhead efforts to deal with shortages of the medicine.

Other members of the Vaccine Taskforce have also been drafted in to tackle the HRT crisis, as the Government redoubles its efforts to ensure women can get hold of the medication.

Announcing Ms McTernan’s new role, Health and Social Care Secretary Sajid Javid said: ‘I understand how much women rely on HRT which is why we will leave no stone unturned to help make sure women can get the HRT they need.

‘Madelaine McTernan will use her excellent skills and expertise to build on the success of the Vaccine Taskforce to bolster supply of vital medicines to women across the country.’

Demand for HRT has risen dramatically, with a 38 per cent increase in the number of prescription items over the past seven years.

The HRT taskforce will be responsible for working with suppliers to find out what can be done to reduce shortages in the short and long term.

Miss McTernan, a Cambridge law graduate who went on to work in investment banking, will remain director general of the Vaccine Taskforce but be primarily focused on HRT supply for the foreseeable future.

‘We will apply the key learnings from the successful way the Vaccine Taskforce have procured life-saving vaccines during the pandemic to help ensure women have reliable ongoing access to these critical medicines,’ she said.