Can surgery for a monthly misery make it worse? It affects thousands of women, but now some experts believe it’s time for a radical rethink of how endometriosis is treated

At Liverpool Street Station in London at rush hour, Helen McLaughlin was overcome by waves of agonising pain — then she fainted.

‘I was waiting for my boyfriend and lost consciousness as the pain in my abdomen was so intense,’ she recalls. ‘I couldn’t speak or breathe. I kept coming round then fainting again, and was rushed to hospital. I was there for three days, on a morphine pump.

‘I have been in severe pain before then and have been since, but that was the worst day. Sometimes I’d burn myself with a hot-water bottle deliberately to distract from the agony.’

Most women are familiar with period pain as the womb cramps to expel its lining once a month. But what Helen, a 35-year-old accountant, describes are symptoms of endometriosis. 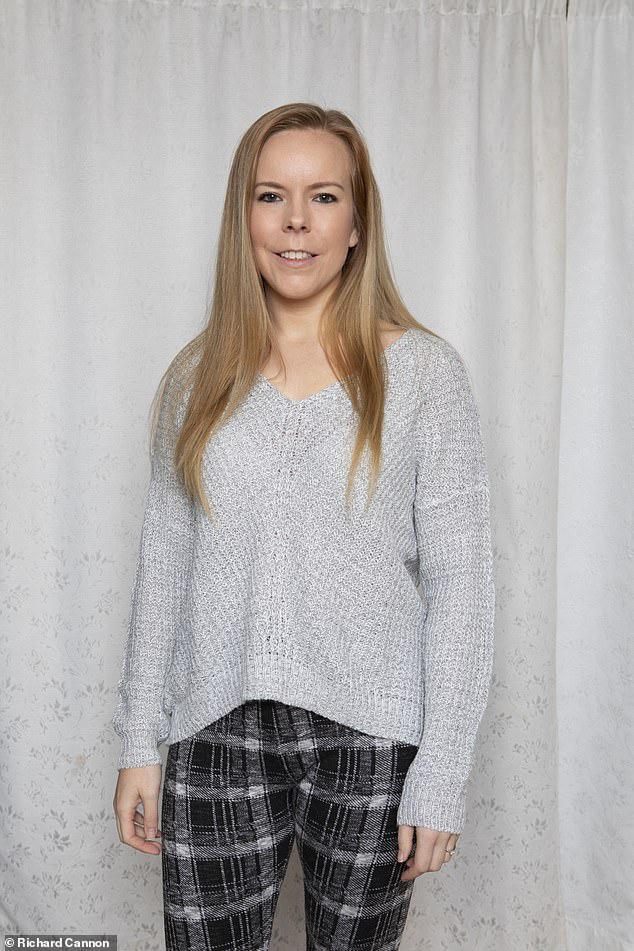 Helen McLaughlin 34, is crippled by endometriosis- a condition where bleeding uterine tissue appears elsewhere in the abdomen, causing debilitating pain

The highly painful condition happens when tissue that usually forms in the womb’s lining each month appears elsewhere — such as the pelvic area and stomach, the chest, spine and even the brain. And just like the lining of the womb, this endometrial tissue, fed by oestrogen, swells and bleeds each month.

However, there is nowhere for this blood to go, so it can cause inflammation that leads to a build-up of scar tissue that typically gets worse over time.

The result is women find themselves in monthly agony, not just during a period but also during ovulation, when their bodies prepare to release an egg.

As the symptoms follow the cycle of the period, endometriosis is often mistaken for heavy or painful periods and can go undiagnosed for years, causing often excruciating pain that builds up over a woman’s reproductive life — and improves only with menopause. The charity Endometriosis UK says it affects at least 1.5 million women in Britain. 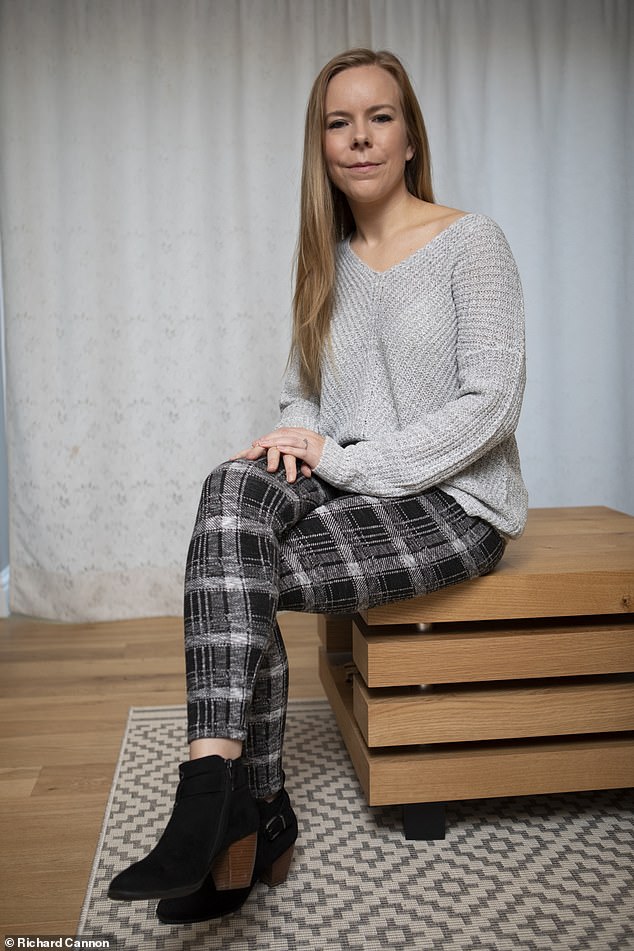 Many women end up having keyhole surgery, under general anaesthetic, to remove the endometrial tissue

Other symptoms vary depending on where the endometrial tissue grows: in the pelvis it can cause heavy, painful periods and pain during sex; around the reproductive organs, it can cause fertility issues.

Mild cases can be treated with anti-inflammatory painkillers, such as ibuprofen, as well as the Pill or coil, which help suppress the oestrogen that can promote tissue growth.

But many women end up having keyhole surgery, under general anaesthetic, to remove the endometrial tissue, where the deposits are cut out or lasered in a technique called ablation.

If this doesn’t work, some women opt for a hysterectomy (womb removal) or oophorectomy (ovary removal). But it can come back — recurring in about 13 per cent of women with severe endometriosis within three years.

Some will have more surgeries, with mixed results.

Now an Australian gynaecologist has a controversial theory as to why these repeat operations could actually make the pain worse.

Professor Jason Abbott of the University of New South Wales says some cases of endometriosis are not just a physical disease but a ‘pain syndrome’ generated by the brain and caused by ‘central sensitisation’, he told Gabrielle Jackson, the author of a recently published book on endometriosis, Pain And Prejudice.

This theory suggests that the brain gets into a pattern of experiencing pain ‘by heart’, in much the same way as a pianist can play a piece of music without seeing the score. The theory does not dispute that the painful tissue forms, but suggests that the pain it causes may linger even after the tissue has been removed.

Helen is uneasy about this: ‘Being told the pain is all in women’s minds could be very insensitive,’ she says, yet adds she knows two desperate sufferers who had hysterectomies hoping to eradicate endometriosis, only to be left in even worse pain.

There is little doubt that the psychological element of pain perception — whatever the condition — is fraught with difficulty. 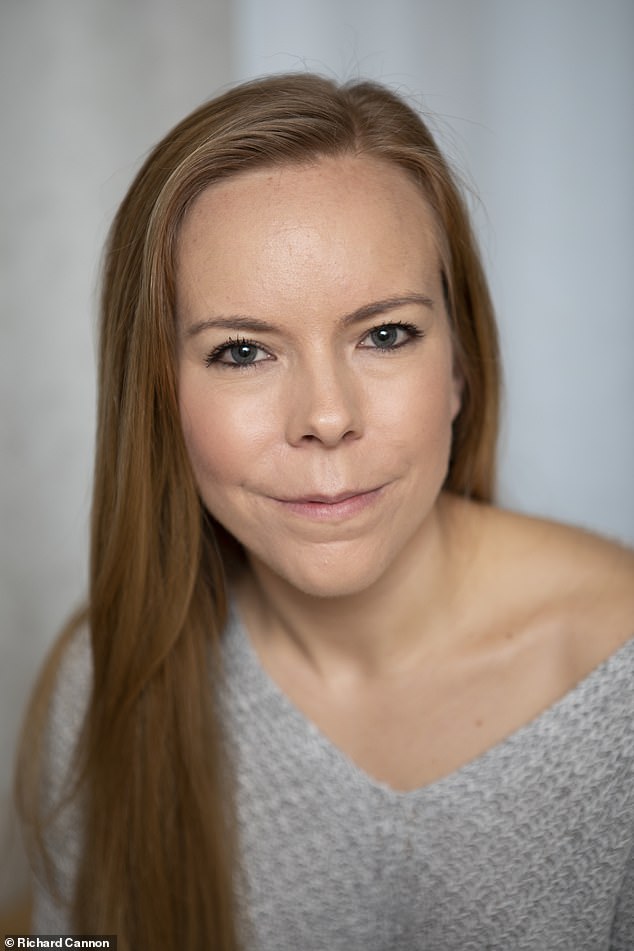 Helen, who lives in Essex, with fiancé David, 32, has had surgery but does not think the pain sensitisation theory applies to her

‘We know that in chronic pain conditions, including period pain, central sensitisation plays a major role, but we don’t know if it is a cause of pain or a consequence,’ says Professor Katy Vincent, a gynaecologist and pain researcher at the University of Oxford. ‘My view is that as well as surgery, we should treat endometriosis holistically with physiotherapy and with psychotherapy.’

‘We’re in a transition period. The old clinical approach of ‘we can cure it with surgery’ is probably wrong,’ says Professor Becker.

‘Certain aspects of this disease may benefit from surgery, but we don’t understand the whole thing. Central sensitisation plays a role in some cases. As soon as someone talks about the brain, people misunderstand and think we are saying it is only in the head.’

Professor Abbott says that ‘for some endometriosis sufferers undergoing surgery, there is limited or even no response. If there is recurrence of pain within a few months or even a year, then repeat surgery is not going to produce a better outcome.’

The picture is further muddied by evidence that not all endometriosis sufferers experience pain.

‘You can get patients whose entire pelvic area is stuck with scar tissue but have no pain,’ says Nick Raine-Fenning, an associate professor of reproductive medicine at the University of Nottingham and spokesman for the Royal College of Obstetricians and Gynaecologists.

‘The disease can take years to diagnose. Many cases are wrongly attributed to irritable bowel syndrome, food intolerances or extreme period pain. The major difference is endometrial pain comes days or a week before the period.’

Helen, who lives in Essex, with fiancé David, 32, has had surgery but does not think the pain sensitisation theory applies to her.

She was treated for ‘problem’ periods as a teenager. ‘I was put on the Pill at 16 as I was having a period every two weeks,’ she says. ‘I was diagnosed with endometriosis ten years later, aged 26, and my pain just got steadily worse.

‘I was referred for ablation in February 2011. The endometrial tissue was in my abdomen, ligaments holding the womb in place and on the bowel and bladder. They removed what they could but the symptoms returned.’

She was given a coil, but it didn’t work: ‘When it’s bad, my pelvic floor spasms. I’m in so much pain I can’t breathe with my belly, only my chest. It makes me faint.’ Helen faced further unsuccessful surgery to remove the endometrial deposits and in December 2012 was prescribed the hormone suppressor Zoladex, which causes temporary menopause. Although her periods stopped, she suffered hot flushes and night sweats.

After three months, hormone replacement therapy (HRT) was offered alongside the Zoladex, but she was also told long-term Zoladex would damage her bones and she was given a new coil.

After her collapse at the station in May 2015, Helen was given the painkiller tramadol, but it left her brain feeling foggy and she was unable to work.

‘The last big surgery to remove endometriosis was in April,’ she says. ‘By then my left ovary was fused to my pelvic wall and other organs were stuck together. I also had adenomyosis, where endometrial tissue grows into the wall of the womb.

‘There was nothing for that other than a coil, which I already had, or a hysterectomy, which I didn’t want — even though I have parked the idea of having children.

‘I now go everywhere with painkillers, so that if it comes back, I can get home rather than collapse in the street.’