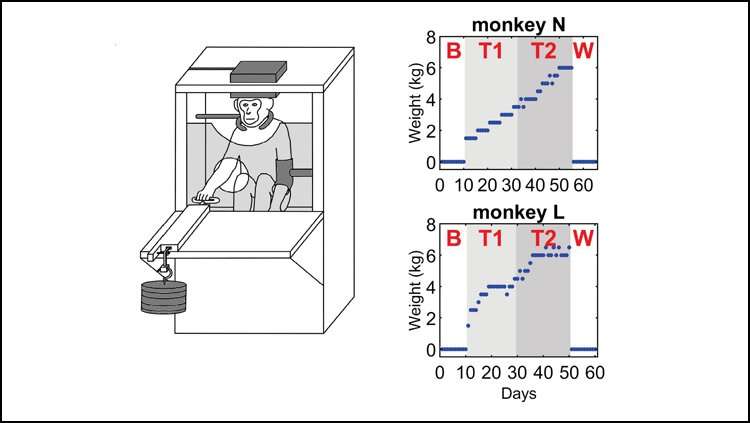 Gym-goers may get frustrated when they don’t see results from weightlifting right away, but their efforts are not in vain: the first few weeks of training strengthen the nervous system, not muscles. New research published in JNeurosci reveals how.

The brain orchestrates movement via two major neural highways descending to the spinal cord: the corticospinal tract (CST) and reticulospinal tract (RST). The CST is thought to be the dominant pathway, with the RST controlling posture. However, the CST does not change during strength training, so increased strength must stem from the more primitive RST.

Glover and Baker trained monkeys to pull a weighted handle using one arm, with the weight gradually increasing over twelve weeks. Each day, the scientists stimulated the motor cortex and the two motor tracts, measuring the resulting electrical activity in the arm muscles. Over the course of the training regimen, the electrical response from stimulating the cortex and RST increased—a sign of strengthened signaling.

After three more months of strength training, stimulating the RST elicited a greater response in the side of the spinal cord connected to the trained arm.