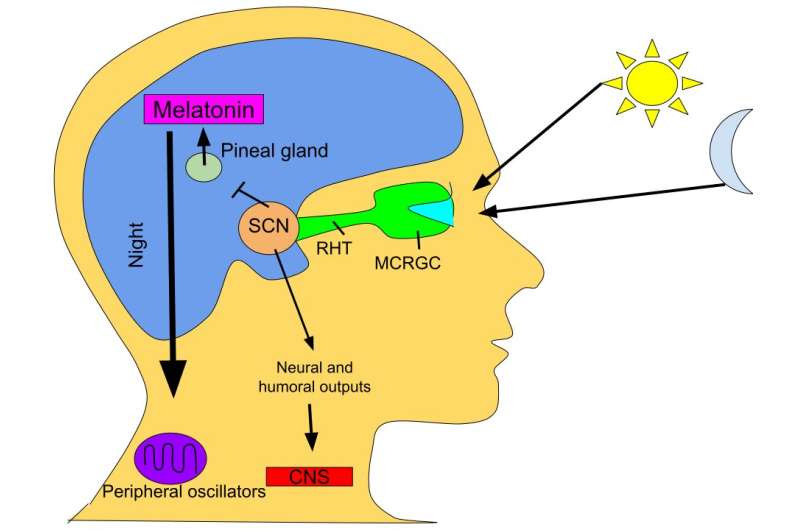 A team of researchers with members from Université Claude Bernard Lyon, Hospices Civils de Lyon and Paris-Saclay Université has found a link between pain sensitivity and a person’s circadian rhythm. In their paper published in the journal Brain, the group describes how they tested pain sensitivity in male volunteers undergoing a “constant routine protocol.”

Medical scientists have known for a long time that people who are in pain seem to feel it more strongly at night. But why this happens has remained a mystery. In this new effort, the researchers found a clue—the circadian rhythm.

Suspecting that pain sensitivity might be tied to a person’s circadian rhythm, the researchers enlisted the assistance of 12 healthy, male volunteers with no history of sleep problems. Each participated in a constant routine protocol while also being tested for pain tolerance.

A constant routine protocol involves having a person lie down in a semi-recumbent position for a period of time—typically 24 hours. During that time period, anything related to rhythm is eliminated. The light is held steady, as is noise. Food is given in small doses every hour. Participants are not even allowed to get up to use the bathroom. The protocol is undertaken as a means for studying circadian rhythms, those that are built into the human anatomy.

In this new effort, the 12 volunteers participated for 34 hours and were tested for pain sensitivity every two hours. The pain tests involved slowly increasing the temperature of a device taped to the body until the subject felt pain. The researchers noted that the volunteers typically halted the device at approximately 115° F. For their study, the researchers first measured the circadian rhythm for each of the volunteers by taking saliva samples every two hours over a 24-hour period and noting melatonin levels.

The researchers found what they described as a strong indication of the circadian rhythm impacting pain tolerance. They found, for example, that pain tolerance was the weakest at approximately 3 or 4 a.m., and strongest at 3 or 4 p.m. To prove that the sensitivity was related to pain and not just thermal stimuli, the researchers repeated the exercise with the pain test reduced to a warmth detection test. In this scenario, they found no differences in tolerance based on time of day.