On the roof of a seven-story apartment building, Rupa Marya, MD, squats to weed a bed of chard. Tall herbs flower against the backdrop of office buildings, shipping cranes, and commuter trains.

It’s a Monday afternoon at the 1-acre Rooftop Medicine Farm. Most of Marya’s colleagues at the University of California, San Francisco (UCSF), where she works as a hospitalist, are checking on patients in antiseptic rooms and tapping reports under fluorescent lights.

But Marya believes that coaxing nourishment from the soil matters at least as much to her patients’ health as anything she does at the hospital. She wants to provide an alternative to highly processed foods grown with petrochemicals, which she blames for inflammatory bowel disease (IBD), cancer, and many of the other diseases that she treats.

The rooftop farm produces 500-1000 lb of fruits, vegetables, and herbs per week, all of it donated to disadvantaged people, including patients at the UCSF pediatric clinic.

“It behooves the medical system to get involved in farming and food,” Marya says. 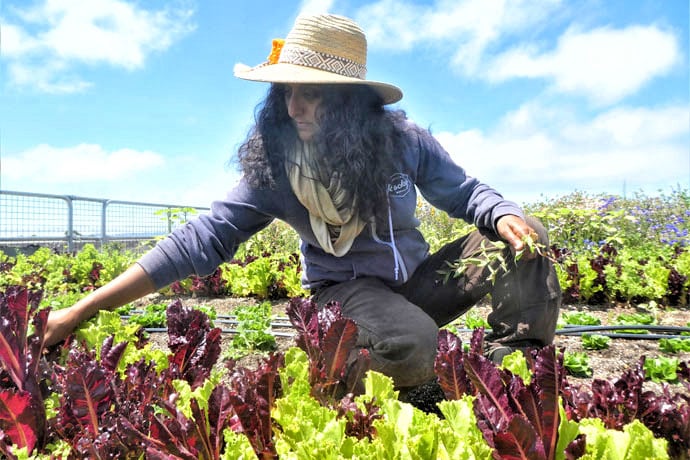 Factors in the environment play a role in most illnesses. And though that insight isn’t new, recent research into the gut microbiome in particular has highlighted the interdependence of the ecosystems within human bodies and the ecosystems that surround them. Now, more and more physicians like Marya are hearing a call to think like ecologists.

Some common health problems, such as cancer, heart disease, and obesity, disproportionately affect people who live in industrialized places, points out Gilaad Kaplan, MD, MPH, a professor of medicine in the division of gastroenterology and hepatology at the University of Calgary in Canada.

IBD serves as a particularly good example. At first, its causes appeared to be mostly genetic because it primarily affected people of European heritage. But then it became clear that wherever the industrial lifestyle went, it was soon followed by a rising rate of IBD.

People living in industrial environments are less likely to acquire beneficial viruses, bacteria, and fungi through vaginal birth and breastmilk as babies, through contact with soil, and through living in close contact with farm animals and people in large households. Our diets lack nutrients, such as soluble fiber, to feed these organisms. Pollution, antibiotics, and tobacco kill some of those that remain.

“We have lost valuable, potentially protective microbes in our gut, because of the way our living has evolved,” says Subrata Ghosh, MD, head of medicine at University College of Cork, Ireland.

The diversity of people’s microbiomes can vary from one region to another within a country, and even according to lifestyles. In one of the most intriguing studies on this subject, researchers reported that the microbiomes of the itinerant Irish Travellers are different from those of the settled people they live among.

These microorganisms in our guts can affect our health in multiple ways. For starters, they can outcompete harmful organisms such as Clostridioides difficile. Also, they can metabolize the chemicals that find their way into our intestines.

“Depending upon the specific kind of microbes you carry in your gut, you may experience an exposure physiologically differently than I do,” says Thomas Sharpton, PhD, associate professor of microbiology and statistics at Oregon State University.

And gut microorganisms can influence the immune system.

This is the mechanism that many researchers blame for IBD, and they believe it may play a role in other autoimmune conditions as well.

They are trying to pinpoint exactly which combinations of gut lifeforms can compensate for that deficit and how to cultivate them.

“In the not-too-distant future, we’re going to start to see the manipulation of the environment of the microbiome in such a way that it will be able to complement the kind of treatment paradigms we have today,” Kaplan says.

Sharpton and his colleagues are putting powerful computers to work sequencing the genomes of the complex communities of organisms in the human gut as well as all the chemicals found there. One goal is to predict how an individual might respond to a particular toxin or infection.

“The microbiome may serve as a very sensitive readout in terms of being able to prioritize individuals for earlier interventions that mitigate the arrival of more adverse physiological complications,” Sharpton says.

What Clinicians Can Do

These researchers are not proposing that individuals move from, say, Houston to the Brazilian rainforest as a way of diversifying their microbiomes. One reason is that there is evidence that microbiomes become established early in life. People who immigrate from less-developed to more-developed countries don’t increase their own risk for IBD but do increase the risk for any of their children born in their new country.

So how can physicians take the ecosystem into consideration? Research on probiotics is making headway, with fecal microbiota transplant already established as a treatment for C difficile.

In the meantime, microbiome researchers say the simplest way that patients can change their relationship to their environments is through diet. For the most part, that means following standard advice such as can be found on the Crohn’s & Colitis Foundation website.

Though randomized, controlled trials are sparse, other standard health recommendations such as physical exercise, plenty of sleep, and reducing stress may improve the health of the microbiome. Kaplan says he recommends these changes to his patients, with the caveat to be careful of ending pharmaceutical treatment abruptly.

Kaplan also notes that physicians quickly hit the limit of what they can accomplish in the clinic.

“We’re ultimately only interacting with people who already have a disease,” he says. “What we can do at a population level is advocate for environmental health policies that prevent diseases from occurring.”

Much more than most physicians, Marya has focused on environmental health. That has sometimes meant trying to change the environment in which individual patients live, for example, by getting them on the list for homeless shelter beds.

It has also meant changing the environment around her. The Rooftop Medicine Farm, supported by government grants and philanthropy, has brought plants and soil to an acre of Oakland, one of the most industrial cities on the West Coast. On a larger scale, Marya helps manage the 38-acre Te Kwe A’naa Warep farm in the more rural San Gregorio, California. 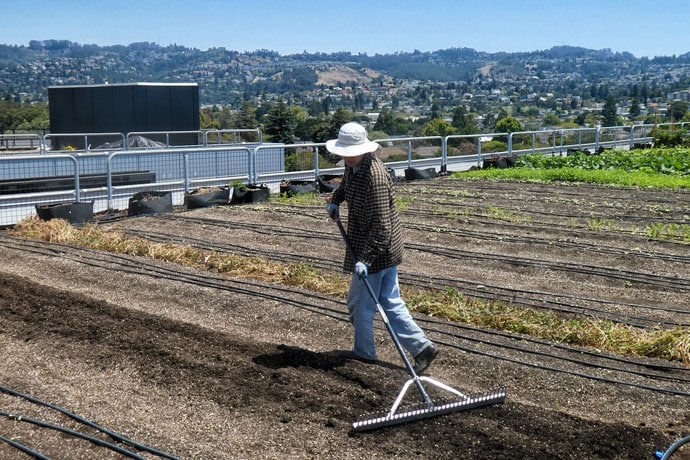 A vegetable bed being raked at Rooftop Medicine Farm in Oakland.

Both farms provide an alternative to the use of petrochemicals that is widespread in US agriculture. Marya believes that such chemicals deprive food of nutrients and harm the people using them.

Not only do the Rooftop Medicine Farm and Te Kwe A’naa Warep follow organic practices but they employ indigenous ecologic techniques with the goal of greater biodiversity, improved water retention, and carbon dioxide stabilization in the soil, along with better relationships between indigenous and nonindigenous people.

At UCSF, she says, many of her patients with thyroid cancers, lymphomas, and brain cancers worked on the farms that produced fruit and vegetables using synthetic fertilizers and pesticides.

She advises her colleagues not just to tell their patients, “Oh, you have diabetes, eat this red pepper,” but also to ask, “How was that pepper grown?”

Meanwhile, Marya is working to change the broader social and political environment. In their book Inflamed: Deep Medicine and the Anatomy of Injustice , she and her co-author, Raj Patel, argue that oppression and inequity are medical problems, not only because they deprive people of food and shelter and subject them to toxins but also because experiences such as racism cause chronic stress that can impair the immune system and contribute to a host of diseases.

“We have the privilege to be at the bedside, and to witness how these dysfunctional social systems are impacting the bodies of people,” Marya says. “And we have a duty to speak up about it.”

She applies this social justice approach to the farm, where all workers receive salaries equivalent to the median income for the surrounding area. “We’re not exploiting people here to make one person wealthy,” she says.

Not only do the people eating the food get it for free, they decide what the farm produces. “We ask our community what they want us to grow for them, and then we show up with the food,” says Marya. “It’s been really beautiful.”

In a further effort to overturn social hierarchies, Marya is working to return Te Kwe A’naa Warep to the ownership of the descendants of the Ramaytush Ohlone people, who lived on the land before being dispossessed and enslaved by Europeans starting in the sixteenth century.

Healthy medicine also requires a healthy physician, Marya believes, and that means limiting time in the intense environment of a hospital. She herself spend about 60% time in the clinic. Even before she turned to farming, she toured with a band, then took time for motherhood.

In effort to bring some of that balance to other healthcare workers, Marya leads 1-day retreats at Te Kwe A’naa Warep for frontline medical workers exhausted by the pandemic. They reconnect with the soil and swap tales of frustration with the US healthcare system.

“To do that while we’re working together, while we’re growing food for our communities, and remembering how much we love to care for people, has been very reaffirming of our moral and truly sacred duty as healer,” Marya says.

Laird Harrison writes about science, health and culture. His work has appeared in national magazines, in newspapers, on public radio and on websites. He is at work on a novel about alternate realities in physics. Harrison teaches writing at the Writers Grotto. Visit him at www.lairdharrison.com or follow him on Twitter: @LairdH