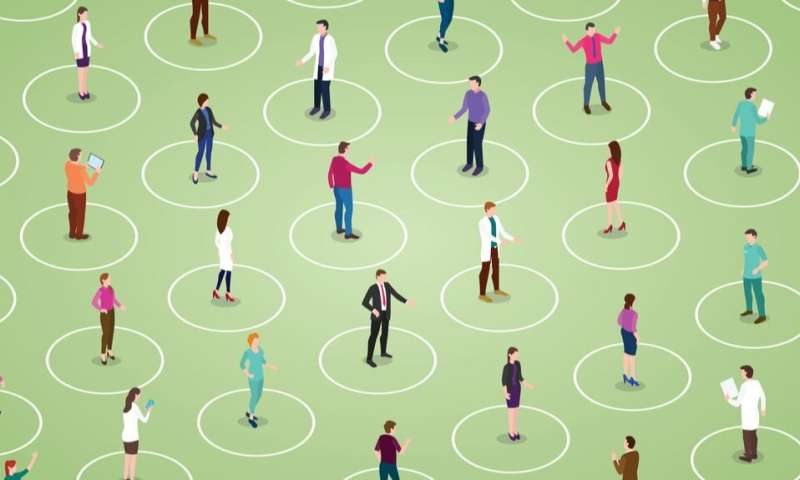 Social distancing has become one of the key strategies for reducing COVID-19 transmission, together with mask wearing and contact tracing. However, a new study, published in the journal PLOS ONE, maintains it is possible to maximize the impact of social distancing on viral transmission and minimize its impact on the economy and people’s well-being—by focusing on the people who are the main drivers of infection.

Lockdowns are a very effective way to reduce transmission and may be necessary, when the infection rate has to be curtailed rapidly, for example because of very high case rates. But lockdowns are disruptive and, in the longer term, more sustainable methods could be adopted.

Today’s study differs in approach from many of the main epidemic models in that it focuses specifically on the role of individuals and, in particular, on the very wide variation seen in the behavior of different people.

Some individuals interact at a much higher rate than others, because of their work, living conditions or social habits—increasing both their chances of being infected and the probability that they will infect others. The simple theoretical model presented in this paper shows that these people are not only the main drivers of infection, but also the key to controlling the epidemic.

This study shows that social distancing can be highly effective in controlling viral transmission. By reducing the interactions of the most interactive individuals, this can be done while maintaining significant levels of activity in the population as a whole.

Professor Christopher Ramsey, the author of the study and a physicist specializing in interdisciplinary science in the School of Archaeology, says, ‘Until vaccination is widespread, we might have to consider that social interaction time is like exposure to the sun, very beneficial in limited amounts, but harmful in excess.’

Since, in many countries, workplaces have been made relatively COVID-secure, social interaction outside the household has come to play a dominant role in viral transmission. Completely stopping such interactions will work, as in a total lockdown, but is a drastic measure and needs to be time-limited.

Many countries have found that, once socialization is allowed again, infection rates rise. The model in this paper suggests this is largely because of the high interaction rates of a minority of people, rather than the interaction rates in the population as a whole.

For countries trying to reopen society in a controlled way, a way forward would be to limit interaction rates for individuals. So, rather than simply allowing or forbidding mixing between households in homes and hospitality venues, it would be more effective to say how frequently this can be done safely.

When rates of infection are still moderate, it might be necessary to recommend socializing no more than once a week. As rates improve, this might be relaxed to once every three days, and then unrestricted when the infection rate is very low. This could provide much finer control over the interaction rates than opening and closing bars and restaurants, and it could enable economic activity and some socialization for everyone most of the time.

This approach should work, if people comply, because someone who socializes every day, rather than just once a week, has seven times the chance of becoming infected and also seven times the probability of infecting someone else. This person’s potential to spread the virus is nearly 50 times higher!

For this reason, the model suggests, the key aim of social distancing policies should be to avoid a minority of individuals interacting far more than the average. Such an approach would also help contact-tracing, since relevant contacts would be fewer if social interactions were limited to once every few days and so more time could be spent following them up properly.