Physician compensation plummeted in the opening weeks of the COVID-19 pandemic in March and April 2020, but earnings had rebounded for many physicians by the end of the year, according to the Medscape Physician Compensation Report 2021: The Recovery Begins. 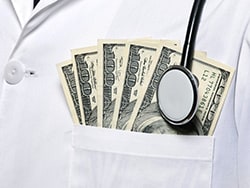 Almost 18,000 physicians in more than 29 specialties told Medscape about their income, hours worked, greatest challenges, and the unexpected impact of COVID-19 on their compensation.

How Many Physicians Avoided Massive Losses

When the pandemic started around March 2020, “a great many physicians saw reductions in volume at first,” says Robert Pearl, MD, former CEO of the Permanente Medical Group and a professor at Stanford University.

Several key factors saved many practices from hemorrhaging money, says Michael Belkin, JD, divisional vice president at Merritt Hawkins and Associates, in Dallas, Texas. “Many physicians used the federal Paycheck Protection Program [PPP] to help keep themselves afloat,” he says. “A large percentage reduced their staff, which reduced their expenses, and many got some of their volume back by transitioning to telemedicine.”

In a 2020 survey for the Physicians Foundation, conducted by Merritt Hawkins, 48% of physicians said their practice had received PPP support, and most of those said the support was enough to allow them to stay open without reducing staff. Only 6% of practices that received PPP support did not stay open.

Early in the pandemic, Medicare reimbursements for telemedicine were equal with those for face-to-face visits. “Since telemedicine takes a third less time than an inpatient visit, doctors could see more patients,” Pearl says.

The switch was almost instantaneous in some practices. Within 3 days, a 200-provider multispecialty practice in Wilmington, North Carolina, went from not using telehealth to its being used by all physicians, the Medical Group Management Association (MGMA) reported. By late April, the practice was already back up to about 70% of normal overall production.

However, telemedicine could not help every specialty equally. “Generally, allergists can’t do their allergy testing virtually, and patients with mild problems probably put off visits,” Pearl says. Allergists experienced a large percentage decline in compensation, according to Medscape’s survey. For some, income fell from $301,000 the prior year to $274,000 this year.

However, Medscape’s survey found that internists’ average compensation declined from $251,000 in the prior year to $248,000, and average family physicians’ compensation actually rose from $234,000.

Pediatricians had a harder slog. Their average compensation sank from $232,000 to $221,000, according to the report. Even with telemedicine, parents of young children were not contacting the doctor. In May 2020, visits by children aged 3 to 5 years were down by 56%.

Procedure-oriented specialties were particularly hard-hit at first, because many hospitals and some states banned all elective surgeries at the beginning of the pandemic.

Some other proceduralists, however, did not do as well. Otolaryngologists’ compensation fell to $417,000, the second-biggest percentage drop. “This may be because otolaryngologists’ chief procedures are tonsillectomies, sinus surgery, and nasal surgery, which can be put off,” Pearl says.

“Not only has 70% of our revenue disappeared, but our physicians are still working every day,” an independent anesthesiology practice in Alabama told the MGMA early in the pandemic.

The biggest increase in compensation by far was made by plastic surgeons, whose income rose 9.8% over the year before, to $526,000. This put them at the top of the list

Pearl adds that plastic surgeons can perform their procedures in their offices rather than in a hospital, where elective surgeries were often canceled.

Belkin says specialties other than plastic surgery had been offering more boutique cosmetic care even before the pandemic. In 2020, nonsurgical cosmetic procedures such as neurotoxin therapy, dermal filler procedures, chemical peels, and hair removal earned $3.1 billion in revenue, according to a survey by the Aesthetic Society.

Other Specialties That Earned More Even During COVID

In Medscape’s survey, several specialties actually earned more during the pandemic than in 2019. Some specialties, such as critical care and public health, were integral in managing COVID patients and the pandemic.

However, some specialties involved in COVID care did not see an increase. Compensation for infectious disease specialists (at $245,000) and emergency medicine specialists (at $354,000) remained basically unchanged from the prior year, and for pulmonologists, it was slightly down.

Emergency departments (EDs) reported decreases in volume of 40% or more early in the pandemic, according to the American College of Emergency Physicians. It was reported that patients were avoiding EDs for fear of contracting COVID, and car accidents were down because people ventured out less.

In this year’s report, psychiatrists saw a modest rise in compensation, to $275,000. “There has been an increase in mental health visits in the pandemic,” Pearl says. In 2020, about 4 in 10 adults in the United States reported symptoms of anxiety or depressive disorder, up from 1 in 10 adults the prior year. In addition, psychiatrists were third on the list of Merritt Hawkins’ most requested recruiting engagements.

Oncologists saw a rise in compensation, from $377,000 to $403,000. “Volume likely did not fall because cancer patients would go through with their chemotherapy in spite of the pandemic,” Pearl says. “The increase in income might have to do with the usual inflation in the cost of chemotherapy drugs.” Pinto saw the same trend for retinal surgeons, whose care also cannot be delayed.

Medscape’s survey also reports increases in compensation for rheumatologists, endocrinologists, and neurologists, but it reports small declines among dermatologists, radiologists, and gastroenterologists.

The gender-based pay gap in this year’s report is similar to that seen in Medscape’s report for the prior year. Men earned 27% more than women in 2021, compared with 25% more the year before. Some physicians commented that more women physicians maintained flexible or shorter work schedules to help with children who could not go into school.

“Having to be a full-time physician, full-time mom and full-time teacher during our surge was unbelievable,” a primary care pediatrician in group practice and mother of two reported in November. “I felt pulled in all directions and didn’t do anything well.”

In addition, “men dominate some specialties that seem to have seen a smaller drop in volume in the pandemic, such as emergency medicine, infectious disease, pulmonology, and oncology,” says Halee Fischer-Wright, MD, CEO of MGMA.

Employed physicians, who typically work at hospitals, shared the financial pains of their institutions, particularly in the early stages of the pandemic. In April, hospital admissions were 34.1% below prepandemic levels, according to a study published in Health Affairs. That figure had risen by June, but it was still 8.3% below prepandemic volume.

By the end of the year, many hospitals and hospital systems were in the black, thanks in large part to generous federal subsidies, but actual operations still lost money for the year. Altogether, 42% of them posted an operational loss in 2020, up from the 23% in 2019, according to a survey by Moody’s Investors Service.

Medscape’s report shows that many employed physicians lost pay in 2020, and for many, pay had not returned to pre-COVID levels. Only 28% of primary care physicians and 32% of specialists who lost pay have seen it restored, according to the report. In addition, 15% of surveyed physicians did not receive an annual raise.

Many employed doctors are paid on the basis of relative value units (RVUs), which is a measure of the value of their work. In many cases, there was not enough work to reach RVU thresholds. Would hospitals and other employers lower RVU targets to meet the problem? “I haven’t seen our clients make concessions to providers along those lines,” Belkin says.

Physicians Had to Work Longer Hours

The Medscape report also found that in 2020, physicians saw fewer patients because each visit took longer.

“With the threat of COVID, in-person visits take more time than before,” Belkin says. “Physicians and staff have to prepare the exam room after each visit, and doctors must spend more time answering patients’ questions about COVID.”

“The new protocols to keep everyone safe add time between patients, and physicians have to answer patients’ questions about the pandemic and vaccines,” Fischer-Wright says. “You might see a 20% increase in time spent just on these non-revenue-generating COVID activities.”

Although 2020 was a challenging year for physicians, the percentage of those who were satisfied with their specialty choice generally did not slip from the year before. It actually rose for several specialties ― most notably, rheumatology, pulmonology, physical medicine and rehabilitation, and nephrology.

One specialty saw a decline in satisfaction with their specialty choice, and that was public health and preventive medicine, which plummeted 16 percentage points to 67% ― putting it at the bottom of the list.

Even before the pandemic, many public health departments were chronically underfunded. This problem was possibly exacerbated by the pressures to keep up with COVID reporting and testing responsibilities.

Although 2020 was a wild ride for many physicians, many came out of it with only minor reductions in overall compensation, and some saw increases. Still, some specialties and many individuals experienced terrible financial stress and had to make changes in their lives and their spending in order to stay afloat.

“The biggest inhibitor to getting back to normal had to do with doctors who did not want to return because they did not want to risk getting COVID,” Pinto reports. But he notes that by February 2021, most doctors were completely vaccinated and could feel safe again.