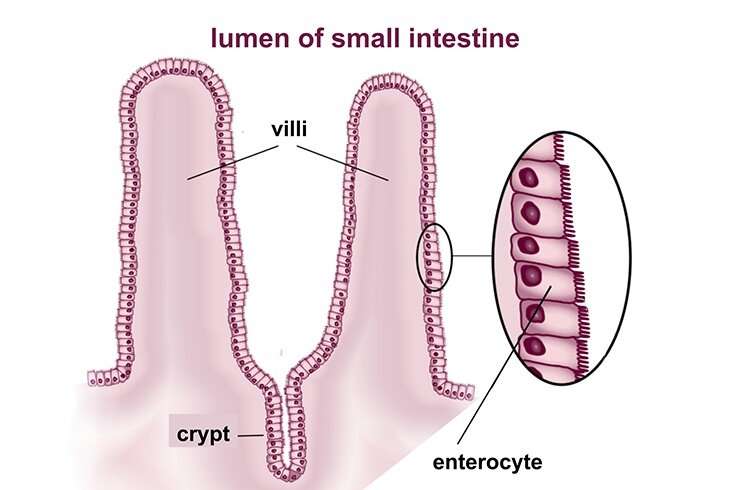 Using miniature guts grown in a dish and 3D biophysical modeling, FMI researchers and their collaborators have uncovered the forces that give the intestinal wall its classic brushlike appearance. The findings can help to understand how the gut takes form during development—and how this process goes awry in disease.

Like miniature construction workers, cells orchestrate the building of three-dimensional tissues and organs during embryonic development. To understand the rules governing the growth and repair of these complex structures, FMI group leader Prisca Liberali and her team analyze tiny replicas of organs—3D clusters of cells known as ‘organoids’—that look and function almost like their full-sized counterpart.

Gut organoids derived from single cells are able to form an intricate structure organized into fingerlike protrusions called villi and microscopic pits known as crypts. This structure matches up anatomically and functionally the gut lining, and it surrounds a fluid-filled cavity called lumen, which mimics the gut’s interior where digested food travels. Scientists knew that the gut lining has a brushlike appearance: villi provide a huge amount of surface area for nutrients to be absorbed into the bloodstream, and crypts contain intestinal stem cells, which are responsible for the constant regeneration of the intestinal mucosa. However, it’s unclear how this characteristic shape forms, Liberali says.

To fill this knowledge gap, Qiutan Yang, a postdoc in Liberali’s group, and her colleagues at the Institute of Science and Technology Austria set out to combine biophysical models with the analysis of intestinal organoids. Their results, published today in Nature Cell Biology, uncover the physical forces that sculpt the gut epithelium, suggesting that fluid from the lumen can contribute to bend the intestinal lining. “When people talk about forces in tissues, the main focus is on mechanical stress rather than water flow,” Yang says. “Our study reveals that fluids can play a very important role in shaping tissues.”

First, the researchers looked at gut organoids under the microscope as the spherical clusters of cells bulged outwards to form buds that mimic intestinal crypts. In the crypts, the side of cells facing the lumen—known as the cell’s apical side—shrank in size. At the same time, the volume of the lumen decreased, the team found.

To screen different mechanical scenarios for how crypts take shape, the researchers developed 3D biophysical models, which they compared with the images obtained at the microscope. The only plausible model turned out to be one where the formation of crypts occurs as the tissue bends and its thickness increases.

Indeed, when the researchers tested this computer model using intestinal organoids, they found that a protein called myosin II, a close relative of the protein that makes our muscles contract, increased at the apical side of crypt cells as the spherical organoids bulged and budded. But in the crypts’ neighboring structures, which mimic the intestinal villi, myosin II accumulated on the side of cells facing away from the lumen—known as the cell’s basal side.

“Myosin is higher apically in the crypts and basally in the villi,” Yang says. This suggests that cells in crypts and villi have to “work together” to guarantee that tissue shaping can happen successfully, she adds. “It’s a remarkable coordination.”

Next, the researchers went back to the initial observation that, as crypts form, the volume of the lumen decreases. They found that, during crypt formation, a specific type of cells in the villi swells. These cells, called enterocytes, typically line the inner surface of the gut and their main function is to absorb nutrients from food.

Further experiments showed that water from the lumen moves by osmosis into enterocytes in the villi, making the cells puff up and the tissue thicken. This causes the neighboring crypt tissue to bend—similarly to what happens when our fingers and toes get wrinkly after we spend too much time in water.

The team also found a specific level of force that tugs on the apical side of crypt cells, causing crypts to form and preventing them from being ‘undone,” for example when pressure in the lumen increases. This finding, Liberali says, could be relevant for conditions such as severe diarrhea caused by microbial infections, which causes pressure in the gut interior to surge. “During intestinal regeneration or strong diarrhea, you want to maintain tissue integrity in the intestine,” she says.