Pharma giants go to war: Moderna SUES  Pfizer and BioNTech and accuses them of COPYING their mRNA technology – patented in 2010 – to develop their COVID vaccines

Moderna is suing its two major competitors in the market for COVID-19 vaccines, Pfizer and BioNTech, over allegations that the two firms used its patented technology in the development of their mRNA jabs.

Both Moderna’s shot and the joint Pfizer-BioNTech jab are mRNA shots – a little-used technology before its introduction to the mainstream during the COVID-19 pandemic. Moderna alleges that the two competing firms copied technology it had patented between 2010 and 2016.

Pfizer and BioNTech have been the major winners in the rollout of the shots. Pfizer alone is projected to earn around $32 billion in sales of its shot around the world this year – with the figure likely to increase with the soon-to-be approval of its Omicron-specific shot. The New York City-based firm also reported $36 billion in revenue last year, combining for $68 off of vaccine sales alone.

Moderna follows just behind, projecting $19 billion in global Covid vaccine sales this year. The company says it is not seeking to stop the sale of the Pfizer shot or have it removed from the market – but instead to receive damages for patent infringement.

The Cambridge, Massachusetts-based firm has faced patent infringement allegations of its own. In February, two Vancouver, Canada-based biotech firms brought a lawsuit against Moderna, alleging that it had hijacked its nanoparticle technology in the development of the shot. It also faced a suit from the National Institutes of Health over having its scientists named as inventors of the jab. 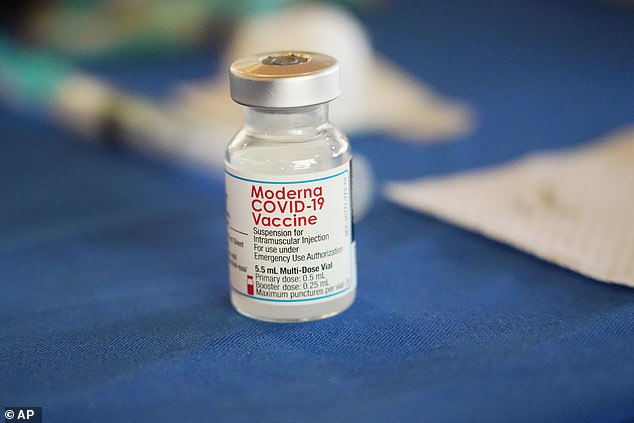 ‘We are filing these lawsuits to protect the innovative mRNA technology platform that we pioneered, invested billions of dollars in creating, and patented during the decade preceding the COVID-19 pandemic,’ Stephane Bancel, CEO of Moderna, said in a statement.

‘This foundational platform, which we began building in 2010, along with our patented work on coronaviruses in 2015 and 2016, enabled us to produce a safe and highly effective COVID-19 vaccine in record time after the pandemic struck.’

Pfizer told DailyMail.com that it had not yet been served the lawsuit and could not comment on the allegations.

BioNTech did not immediately respond to a DailyMail.com request for comment.

In October 2020, two months before both the Moderna and Pfizer-BioNTech shots hit the market, the former said it would not enforce patents on its mRNA technology.

The move was seen as a show of good faith from the biotech company, though some critics said that by still holding the patents the company would always have the option to reverse the policy and begin file suits against other firms.

Moderna is seeking damages for sales Pfizer made that were not in those 92 countries.

‘Outside of AMC 92 countries, where vaccine supply is no longer a barrier to access, Moderna expects Pfizer and BioNTech to compensate Moderna for [the shot’s] ongoing use of Moderna’s patented technologies,’ Shannon Thyme Klinger, Moderna’s chief legal officer, said in a statement.

‘Our mission to create a new generation of transformative medicines for patients by delivering on the promise of mRNA science cannot be achieved without a patent system that rewards and protects innovation.’

Pfizer’s COVID-19 vaccine is available in 164 countries, only trailing the AstraZeneca shot in prevalence. Moderna is third, having been approved in 109 nations.

In the United States, the largest purchaser from private vaccine companies, the Pfizer jab has been administered more than 360 million times.

Moderna’s shot falls well behind, having been administered 230 million times, according to data from the Centers for Disease Control and Prevention (CDC).

Both companies have had booster doses approved by the Food and Drug Administration and CDC – along with fourth doses for the severely immunocompromised and for Americans over 50.