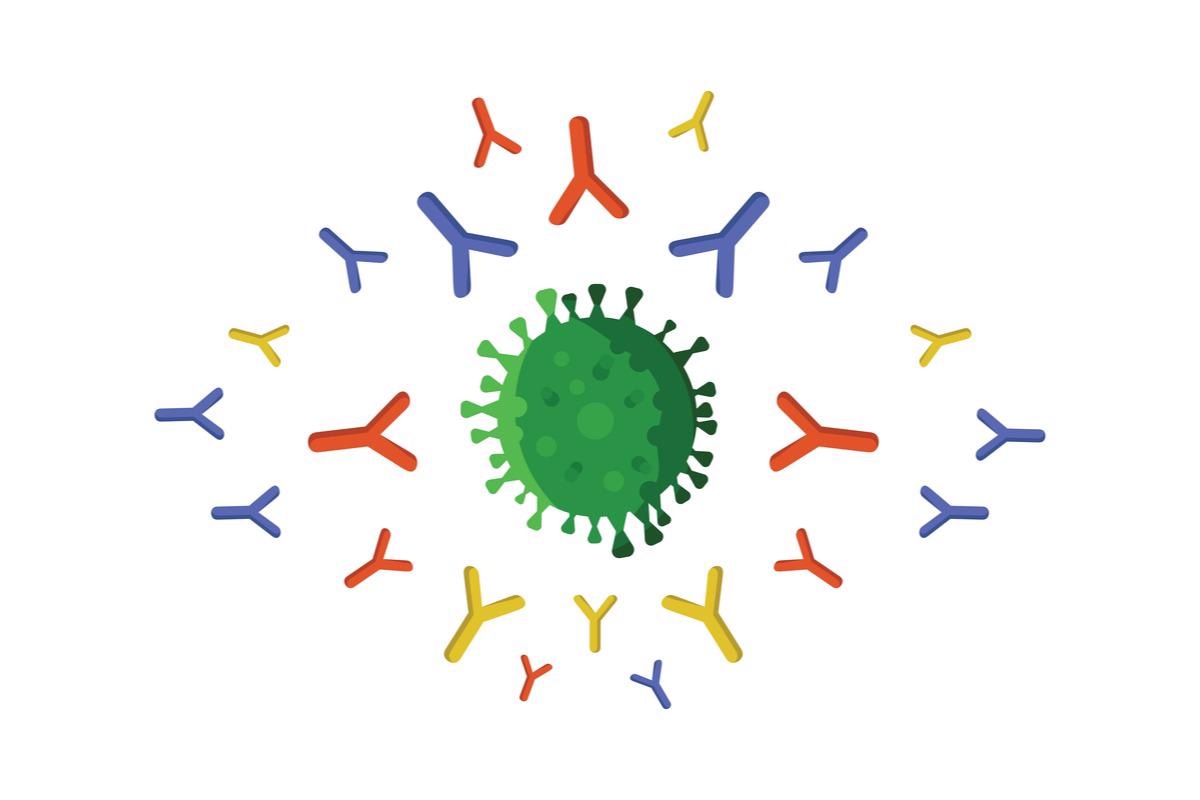 Coronaviruses belong to Alpha, Beta, Gamma, and Delta genera and can infect different birds and mammals. There are seven human CoVs that have been identified to date, of which include HCoV-229E, HCoV-NL63, HCoV-OC43, HCoV-HKU1, severe acute respiratory syndrome (SARS)-CoV, Middle-East Respiratory Syndrome (MERS)-CoV, and SARS-CoV-2. Whereas HCoV-229E, HCoV-NL63, HCoV-OC43, and HCoV-HKU1 are endemic viruses and cause mild disease, SARS-CoV, MERS-CoV, and SARS-CoV-2 have caused severe outbreaks in the past two decades.

SARS-CoV-2 causes the coronavirus disease 2019 (COVID-19), which was declared a pandemic by the World Health Organization (WHO) in March 2020. The development of COVID-19 mitigation policies has been consistently complicated by the emergence of novel SARS-CoV-2 variants of concern (VOC), which exhibit at least partial resistance to many therapeutic antibodies and vaccines.

Protection induced by vaccines is mainly provided by neutralizing antibodies (nAbs) directed at the receptor-binding domain (RBD) of the SARS-CoV-2 spike (S) protein, which is also targeted by the therapeutic mAbs. Since the most recent Omicron BA.1 and BA.2 variants contain a highly mutated RBD, most mAbs are ineffective against them. Thus, other sites on the S protein need to be explored for therapeutic breakthroughs.

Immunoglobulin G (IgG) reactivity to S proteins of the human CoVs was assessed. About 19 donors were identified for isolating and characterizing mAbs.

IgG+ memory B cells (MBCs) were screened in a two-stage method prioritizing for mAbs with great breadth of reactivity, which identified 60 mAbs reactive to a minimum of three CoVs. Further examination revealed that only six mAbs were reactive to all seven S proteins, which included COV44-62, COV91-27, COV44-79, COV77-39, COV77-04, and COV78-36.

Only COV44-62 showed neutralization of MERS-CoV, whereas other mAbs failed. Interestingly, COV77-39 had no neutralizing activity despite having the same broad binding reactivity as the remaining mAbs. All six mAbs were observed to bind to the S2 subunit and not to the RBD or N-terminal domain (NTD) of the SARS-CoV-2 S protein.

A surface plasmon resonance (SPR)-based high-throughput analysis was performed, wherein 15-mer overlapping peptides spanning the entire length of the SARS-CoV-2 S2 subunit were mapped. The SPR analysis revealed that the mAbs bound to peptides 42 – 44 sharing the 815RSFIEDLLF823 motif, located in the fusion peptide region of SARS-CoV-2.

Thirty-five viral isolates, which were representative of each CoV genus, were studied to determine genetic diversity in the 815RSFIEDLLF823 motif. The motif was conserved in more than 90% of the selected isolates. 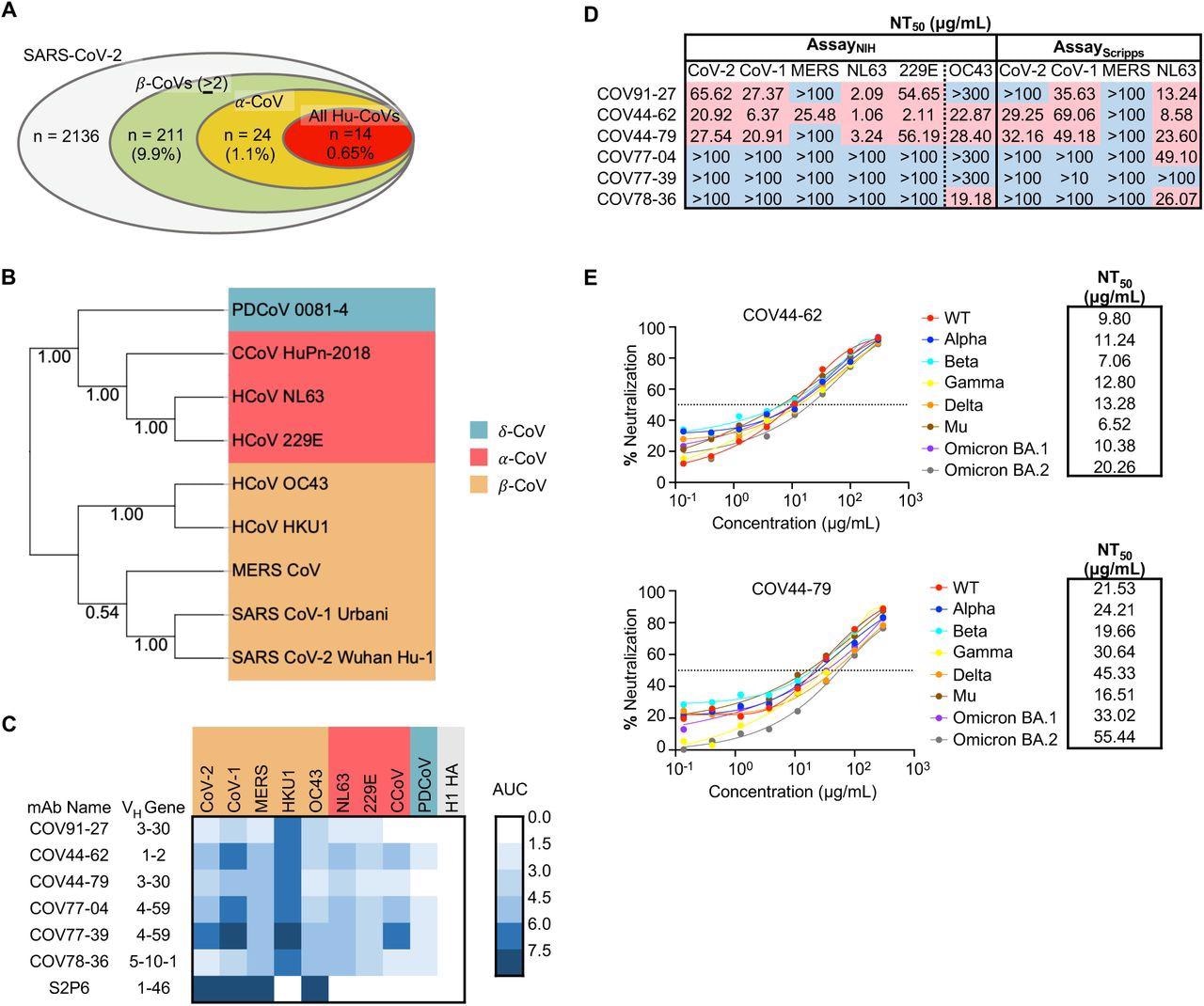 Broadly neutralizing antibodies target coronaviruses associated with human disease. (A) Analysis of the frequency of MBCs expressing broadly reactive antibodies from n = 19 donors. Values in parentheses represent the percentage of SARS-CoV-2 reactive supernatants that also bind the specified subsets of non-SARS coronavirus spikes. A total of 10,356 MBC culture supernatants (50-100 B cells/well) was screened. (B) Phylogenetic relationships across the coronavirus spike proteins targeted by the broadly reactive mAbs were inferred by the Neighbor-Joining method in MEGA11 using full-length amino-acid sequences of CoV spike proteins. Bootstrap values from 500 samplings are shown on the branches. (C) Heat map representing the binding of broadly reactive mAbs to spike proteins from coronaviruses across the alpha, beta and deltacoronavirus genera. H1 hemagglutinin was included as a negative control for mAb binding experiments and area under the curve (AUC) values for each antigen are shown after subtraction with values for the negative control antigen CD4. (D) Values represent antibody titer at 50% neutralization (NT50) against SARS-CoV-2 Wuhan Hu-1, SARS-CoV-1, MERS-CoV, HCoV-NL63 and HCoV-229E envelope-pseudotyped lentivirus, as well as authentic HCoV-OC43. NT50 values were calculated using the dose-response-inhibition model with 5-parameter Hill slope equation in GraphPad Prism 9. (E) Neutralization of SARS-CoV-2 variants of concern (pseudovirus) by COV44-62 and COV44-79.

Polyclonal sera (IgG) from convalescent donors, messenger ribonucleic acid (mRNA)-1273 (Moderna) vaccinees, and SARS-CoV-2-naïve individuals were obtained to test the binding to fusion peptide of SARS-CoV-2. As a cohort, convalescent donors had lower responses than vaccinated subjects; however, several convalescent subjects had the highest responses among the three cohorts. This indicated that a natural infection could trigger a more robust antibody response to the fusion peptide in specific individuals.

A Syrian hamster model was used to assess the efficacy of COV4-79 and COV44-62 in vivo. COV44-79-treated hamsters showed reduced weight loss with faster recovery than control hamsters. Four out of six COV44-62-receiving hamsters developed clinical signs by day six post-infection, in contrast to only one COV44-79-treated hamster, which showed a respiratory rate on day six.

The authors discovered six mAbs from convalescent individuals binding to all seven human CoVs and two mAbs neutralizing at least six CoVs. All mAbs were directed against the fusion peptide, which is identical in current SARS-CoV-2 VOCs, and conserved across the four CoV genera, thereby highlighting its pivotal role and potential as a candidate site for vaccine design. Despite its potential benefits, this peptide has not been focused on, likely because of the relatively weak binding of mAbs to the intact S protein, which improves only when its S1 cap is removed.

Overall, the present study offered valuable insights into broadly acting mAbs targeting the fusion peptide, a highly conserved site across the CoVs, necessitating further research into this region as a potential vaccine candidate.

Tarun is a writer based in Hyderabad, India. He has a Master’s degree in Biotechnology from the University of Hyderabad and is enthusiastic about scientific research. He enjoys reading research papers and literature reviews and is passionate about writing.