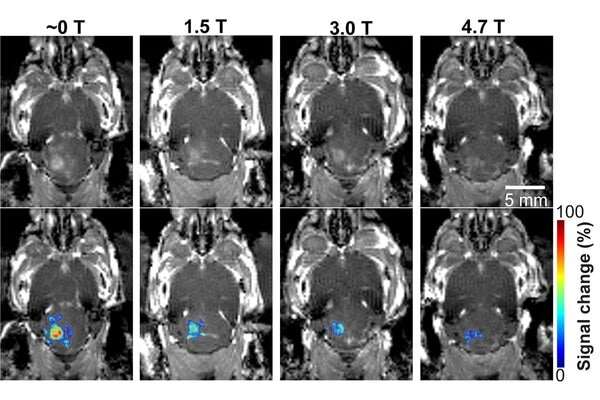 MRI-guided focused ultrasound combined with microbubbles can open the blood-brain barrier (BBB) and allow therapeutic drugs to reach the diseased brain location under the guidance of MRI. It is a promising technique that has been shown safe in patients with various brain diseases, such as Alzheimer’s diseases, Parkinson’s disease, ALS, and glioblastoma. While MRI has been commonly used for treatment guidance and assessment in preclinical research and clinical studies, until now, researchers did not know the impact of the static magnetic field generated by the MRI scanner on the BBB opening size and drug delivery efficiency.

In new research published July 6, 2021, in Radiology, Hong Chen and her lab at Washington University in St. Louis have found for the first time that the magnetic field of the MRI scanner decreased the BBB opening volume by 3.3-fold to 11.7-fold, depending on the strength of the magnetic field, in a mouse model.

Chen, associate professor of biomedical engineering in the McKelvey School of Engineering and of radiation oncology in the School of Medicine, and her lab conducted the study on 30 mice divided into four groups. After the mice received the injection of the microbubbles, three groups received focused-ultrasound sonication at different strengths of the magnetic field: 1.5 T (teslas), 3 T and 4.7 T, while one group never entered the magnetic field.

“The dampening effect of the magnetic field on the microbubble is likely caused by the loss of bubble kinetic energy due to the Lorentz force acting on the moving charged lipid molecules on the microbubble shell and dipolar water molecules surrounding the microbubbles,” said Yaoheng (Mack) Yang, a doctoral student in Chen’s lab and the lead author of the study.

“Findings from this study suggest that the impact of the magnetic field needs to be considered in the clinical applications of focused ultrasound in brain drug delivery,” Chen said.