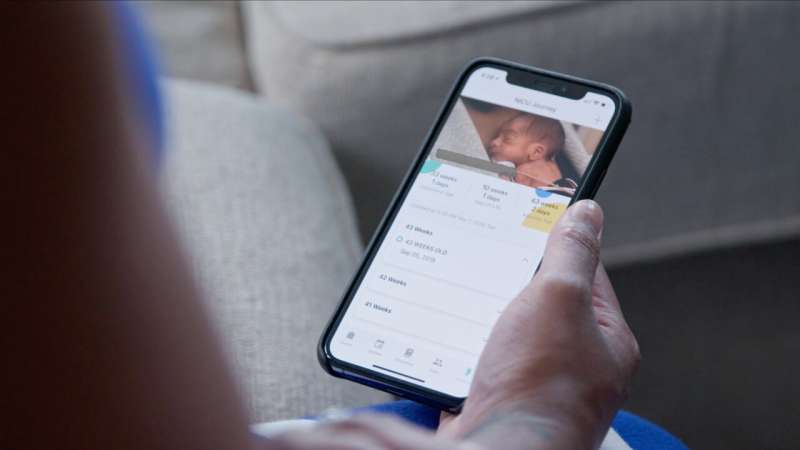 It’s often too much for parents to absorb, especially when they’re sleep deprived and stressed. A smartphone app tested at Northwestern University, NICU2Home, which is still in the research phase, aims to make this transition easier.

A new study has found it boosts parents’ confidence while caring for their babies, and it continues to help them up to a full month after they’ve left the hospital. The study was recently published in the Journal of Pediatrics.

Parents in the study who used the app reported higher self-efficacy (i.e. felt more confident about taking care of their babies) while their babies were in the NICU and up to 30 days after being discharged compared to parents in the control group who didn’t use the app. There was also an association with how often parents used the app and their reported level of confidence caring for their baby, the study found.

“A lot of the things parents do to take care of a baby, like feeding or bathing or even holding, are taken care of by the professionals in the NICU. Many parents don’t feel comfortable taking care of them because they’re very small, sick and are connected to monitors and tubes,” said lead study author and app co-founder Dr. Craig Garfield, a professor of pediatrics and medical social sciences at Northwestern University Feinberg School of Medicine and a pediatrician at the Ann & Robert H. Lurie Children’s Hospital of Chicago. “Our app was designed to support parents on being the most prepared mother or father for that particular baby.”

App fills in the gaps for tired, stressed, distracted parents

Parents in the NICU are often distracted, tired or under too much stress to fully absorb clinicians’ firehose of important information about their babies. To combat this, the app delivers personalized educational information to parents, including developmental milestones by age, common health concerns and even video demonstrations (i.e. feeding, swaddling), which fills in information they may have missed from the bedside clinician, Garfield said.

“As a clinician, I might only have a limited amount of time to talk to a family about an issue with their child or they may be overwhelmed, but with the information offered in the app, being connected to the electronic medical record and being able to access the app for a full year after leaving the NICU, we think it’s a really useful tool for parents in the NICU,” Garfield said.

“Our goal is to empower NICU parents with a digital technology providing the right information at the right time,” said study co-author and app co-founder Young Seok Lee, an adjunct professor of medical social sciences at Feinberg. “With greater understanding of how to navigate the NICU, parents can confidently the provide right care for their babies and for themselves, too.”

Additionally, when parents need to go home while the baby is still in the NICU, they can remotely check the app for real-time updates on which nurse or doctor is caring for their child and wake up to an update on the baby’s medical status.

“We found the first thing users would do in the morning is check the app because it gives them an update on what happened overnight,” Garfield said. “Did the baby move into an open crib? Were there any changes in their respiratory situation? Did the baby gain weight? They also check it right before bed at night.”

How many times did parents tap the app?

To assess app engagement, the scientists tracked how many times users tapped the app. On average, participants tapped the app 15 times per day. Those who tapped more than that had higher self-efficacy scores, the study found, meaning there was an association with how often someone used the app and their confidence caring for their baby, Garfield said.

Still in its research phase, the NICU2Home app is currently deployed in a study at three non-Northwestern Chicago-area hospitals. Garfield and his team also are looking to expand the app to include parents of full-term babies who were born during the COVID-19 pandemic.

More about the study

A total of 298 parents were enrolled in the study (123 control and 175 who used the app) and 256 completed the Parenting Sense of Competence scale (PSOC) screening, which occurred at four time points throughout the study: Around the day of birth, one day before discharge and at 14 and 30 days post-discharge.