Ganoderma lucidum, known as the yeongji mushroom in Korea and reishi or lingzhi elsewhere, is considered a modern-day elixir and has long been used medicinally in China, Japan and Korea. Ganoderic acid, an active ingredient found in the mushroom, is known for its excellence in enhancing the immune function of cells. Due to the hard texture of the mushroom, it has been ingested in powder or liquid form, but it has been noted that the active ingredient is destroyed when the mushroom is dried for an extended period of time or the extraction is performed at high heat (80 °C or higher).

The Korea Institute of Science and Technology (KIST) announced that a team led by Dr. Ho-Youn Kim of the Smart Farm Research Center of the Gangneung Natural Products Informatics Center determined the conditions for enhancing the anti-inflammatory, anti-diabetic, and antioxidant effects of Ganoderma lucidum and confirmed its marketability as an anti-inflammatory agent for the skin.

In order to reduce the amount of the active ingredient destroyed and increase the efficacy, the KIST research team extracted the active ingredient after drying the mushroom at various temperatures and times, through which they pinpointed the optimal conditions to achieve the best possible anti-inflammatory, antioxidant and anti-diabetic effects. As a result, it was confirmed that drying with hot air at 60°C led to excellent anti-inflammatory properties, as it led to the extraction of a large amount of ganoderic acid, while outstanding antioxidant and antidiabetic activities resulted from freeze-drying the mushroom at -50°C.

Also, an experiment was carried out using the extract from hot air-dried Ganoderma lucidum on inflammation-induced keratinocytes, and the results showed that it effectively suppressed skin inflammation. The extraction conditions yielding such an effective active ingredient for skin inflammation have never been revealed before, and thus a patent application has been filed. 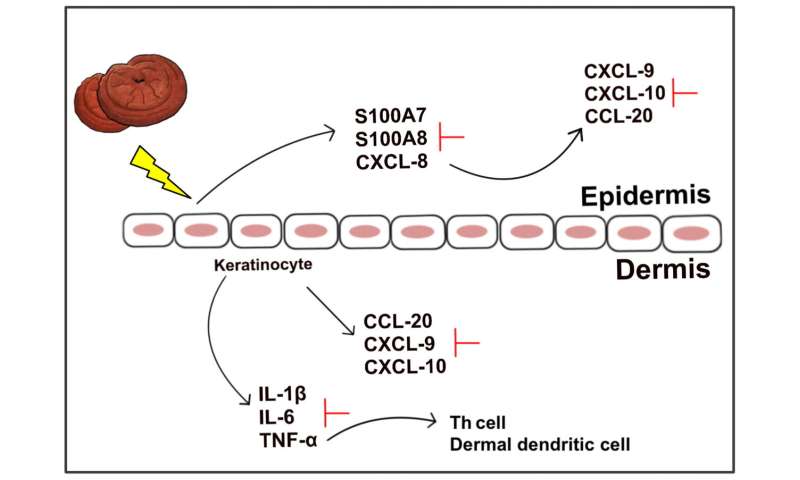 It is believed that the results of this study regarding the effect of varying the drying and extraction conditions on the antioxidant, antidiabetic, and anti-inflammatory activities of Ganoderma lucidum will be useful in developing processed products with the mushroom in the future.