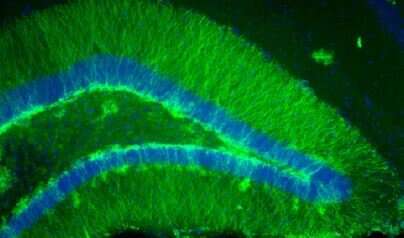 Traumatic brain injury is a leading cause of epilepsy, a chronic neurological disorder characterized by recurrent seizures that affects around 50 million people. A research team led by Bret Smith, professor and head of the Department of Biomedical Sciences, discovered specific neuronal processes that could help advance future preventative treatments for post-traumatic epilepsy.

The findings, published in The Journal of Neuroscience, show that activation of a subset of hippocampal neurons plays a key role in the changes that occur during the development of post-traumatic epilepsy and may be restorative.

“We know that trauma induces a cascade of events that can cause epilepsy,” says Smith. “We want to understand exactly what is occurring, and what the endpoints are, and then work backwards to try and stop epilepsy from developing after a brain injury.”

Neuroscience research in Smith’s lab focuses on two distinct programs; one is aimed at identifying neural changes related to the development of epilepsy, which the team has created leading models in the field to study, and the other examines how the brain is influenced by and contributes to hyperglycemia in diabetes.

For this study, Smith’s team looked at neurons called dentate granule cells, which continuously regenerate in areas of the brain that are crucial for learning and memory and are also commonly impacted by epilepsy. The team was surprised to find that when they were activated, the activity of other brain cells involved in epilepsy were inhibited. And that the cells that were formed just prior to a traumatic brain injury were much more likely to activate this circuit than those generated at other points in time.

“We have been looking at how these synaptic connections reorganize in epilepsy for a long time,” says Smith. “Now, we can look more closely at specific connections of these cells that form at different times.” Next, Smith’s lab will investigate whether this new connection is restoring function and if it occurs in other types of epilepsy. “If we can get to a point of understanding the changes that occur in the development of epilepsy well enough, we may be able to prevent or reverse them.”